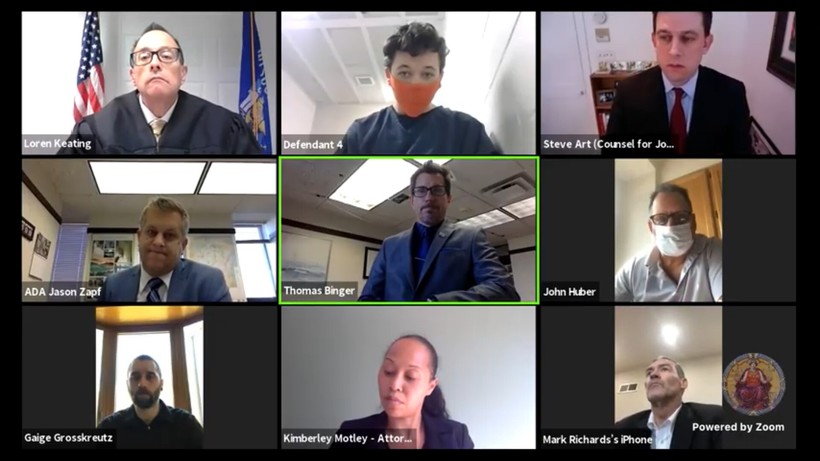 During a virtual pre-trial hearing on Monday in Kenosha County Circuit Court, Kyle Rittenhouse faced his victims for the first time on Nov. 2, 2020. Corrine Hess/WPR

Bond has been set for $2 million for Kyle Rittenhouse, the Illinois teenager charged with fatally shooting two men and wounding a third during a protest in Kenosha this summer.

The 17-year-old faced John Huber, the father of one of his victims, and survivor Gaige Grosskreutz during a virtual pre-trial hearing Monday.

Huber asked the court to consider a $4 million bond. He said his son, Anthony Huber, was a hero.

"Kyle Rittenhouse thinks he is above the law. He has been treated as such. He believes he is justified in this case, and for him to run wouldn’t surprise me," Huber said. "(Anthony) tried to stop him, and so did everyone else. (Rittenhouse) was an active shooter, and he tried to flee. Anyone who says otherwise is dead wrong, including the president."

Since the shooting, Rittenhouse has been seen as a hero in "alt-right" circles and President Donald Trump has not condemned his actions.

Rittenhouse’s lawyers claim he was acting in self-defense Aug. 25, allegedly killing 36-year-old Joseph Rosenbaum, of Kenosha, after Rosenbaum attempted to wrestle his rifle away.

Shortly afterward, Rittenhouse was approached by other protestors and then tripped and fell. While on the ground, Anthony Huber, 26, of Silver Lake, struck Rittenhouse with a skateboard and tried to take the rifle away, according to the Associated Press.

Rittenhouse shot Huber, killing him, and wounded Grosskreutz, of West Allis, who had a handgun.

After the shootings, Rittenhouse returned home to Antioch, Illinois, and was arrested the next day.

Rittenhouse had been held in Lake County, Illinois, until Friday when he was extradited to Kenosha.

He faces life in prison if convicted of his most serious crime — first-degree intentional homicide. Rittenhouse's misdemeanor underage possession of a firearm.

During Monday’s pre-trial hearing, defense attorney, Mark Richards, asked that his client’s bond be set at $750,000 and electronic monitoring.

Richards said Rittenhouse has no prior record, has ties to the Kenosha community and has an "overwhelming self-defense" claim.

Court Commissioner Loren Keating said he was setting Rittenhouse’s bond at $2 million because even though the allegations have not yet been proven, they are "serious allegations."