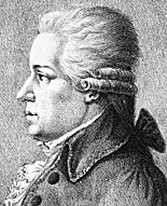 One summer day, circa 1760, young Karl Ditters von Dittersdorf rushed in late to perform in a concert for his employer, a prince who took a dim view of tardiness.

On top of that, he had to fill in for the ailing leader, but he impressed the prince and his guest, the Venetian ambassador, with his performance, which he followed by improvising an accompaniment to the singing of the ambassador’s wife.

The ambassador told the prince that, as a professor of violin himself, he’d like to hear Dittersdorf play a solo. With a sinking feeling, Dittersdorf realized that in his haste he had forgotten to bring any music, a fault that the prince disdained even more than tardiness.

Dittersdorf hit on a plan. He asked his younger brother to make up some kind of accompaniment in G, and when he got the “dreaded order to play,” he casually walked to a table full of scores and pretended that one of them was his Sonata in G. It turned out to be a Symphony in E. Supposedly reading the score, Dittersdorf played his sonata from memory as his brother dutifully faked an accompaniment.

Then the ambassador and another Italian got up and started reading over his shoulder.

Dittersdorf was about to confess and ask the ambassador not to tell the prince about the trick, but as the ambassador commented on the music, Dittersdorf determined that the supposed violin professor was a phony. Emboldened, he began to throw in all kinds of flourishes, much to everyone’s admiration.

The next day, having found out about the ruse, the prince demanded to see him. He gave Dittersdorf a plate with several biscuits on it and told him to eat. Under the third biscuit Dittersdorf found a tidy sum, ten ducats.

“It is because you got out of the scrape so cleverly yesterday!” declared the prince.

Dittersdorf deduced that presence of mind was the quality the prince most valued.