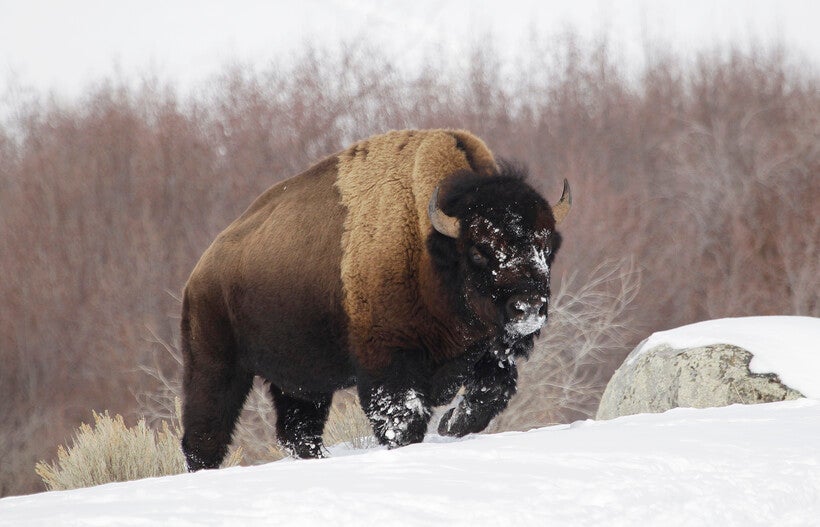 In this Feb. 12, 2011 file photo a bison from Yellowstone National Park walks through the snow. Ted S. Warren/AP Photo

Bison: The biggest, baddest animal in Wisconsin (sort of)

Largest mammal in the state is a toss up between bison and moose, depending on the farm animal loophole
By Colleen Leahy
Share:

A few years ago, when Alstan Van Overmeer was in fourth grade, he was thinking about animals. He wanted to know what the biggest animal you can find in Wisconsin is.

Alstan is now 13 years old and says he still likes to learn about animals, in addition to a lot of other stuff.

"Honestly, I just like learning in general. Like when we’re gonna go to a museum, I wanna open and close it," he said.

And we at WHYsconsin are going to open and close the case of the biggest animal in Wisconsin.

The answer to Alstan’s question depends on whether you choose to exploit the farm animal loophole.

If you decide to include farm animals, the biggest animal in our state is a bison — which also happens to be the largest land animal in North America. Clocking in at more than 2,000 pounds, bison are raised for their meat in Wisconsin.

Before they met the same fate as cows, pigs, chickens and the like, bison were native to — and thriving in — much of the United States, including Wisconsin. But over-hunting and habitat destruction sliced the population from between 60 million and 70 million in the late 1700s to just 800 in the late 1800s.

The last two wild buffalo east of the Mississippi River were shot and killed in Wisconsin in 1832. According to the Wisconsin Bison Producers Association, there are about 7,000 bison on farms throughout the state, as well as a lone herd of captive bison that live in enclosed pastures at Sandhill State Wildlife Area in Wood County.

If you feel like counting farm animals is sort of cheating, then your answer will be different.

If you take farm animals out of the equation, the biggest wild animal in Wisconsin is a moose. At their heaviest, moose weigh around 1,500 pounds — some 500 pounds lighter than the considerably heftier bison.

Moose were common in the northern portion of Wisconsin until the early 1900s. They didn’t make a comeback in the state until the 1960s, when the population in Minnesota started to grow and migrate to Wisconsin. 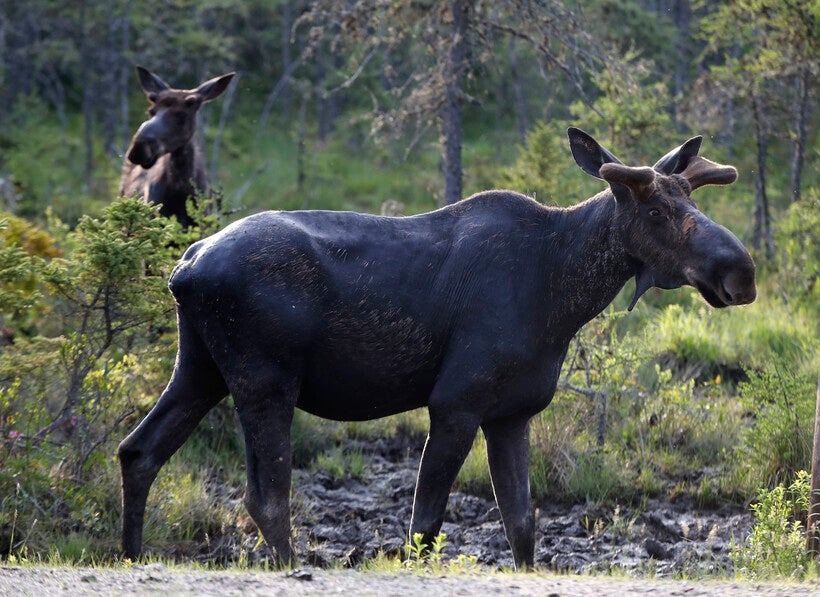 In this May 31, 2018, file photo, a pair of bull moose pause while feeding at the Umbagog National Wildlife Refuge in Wentworth's Location, N.H. Some wildlife biologists in northern New England are hoping that increasing the number of moose taken by hunters this fall will help protect the herd from ticks. Robert F. Bukaty/AP Photo

But moose are rare in Wisconsin; looking for them is practically a full-time job. The explosive growth of the whitetail deer population in recent years has curtailed the moose population, because the deer carry a parasite that’s deadly to moose.

Habitat loss caused by mining and logging is also a problem. Moose live in the cool northern forests of Canada and the northern U.S.

And what about the huge animals of Wisconsin yore? Mammoths, mastodons, 13-foot-long squid and giant beavers?

That giant squid, called a cephalopod, lived during the Paleozoic era 541 million years ago, when the land we now call Wisconsin was covered in a vast tropical ocean.

The big mammals — mammoths, mastodons and giant beavers — came later. They were Ice Age creatures, living in Wisconsin from between 2.5 million and 11,500 years ago.

"It’s a little bit like yesterday for a geologist," Brooke Norstead, assistant director of the University of Wisconsin Geology Museum, said.

And just like yesterday, there was a big animal roaming that huge ice sheet — so vast you could walk to the North Pole on it without touching land — that may sound familiar.

"There was an animal called a stag moose," Norstead said. "Imagine a supersize moose, with even more interesting antlers." 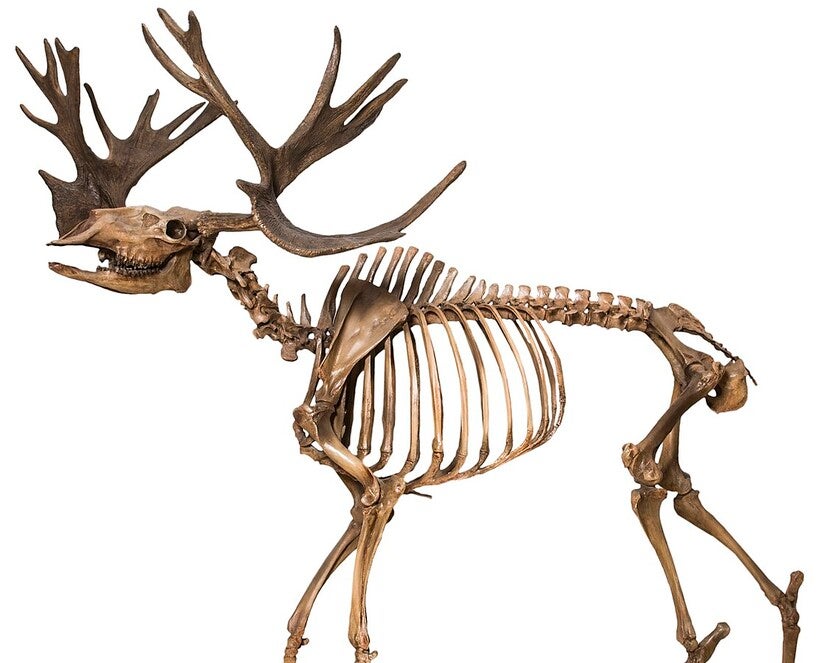 Unlike its contemporary counterpart, the stag moose didn’t hold the distinction of being the largest animal in Wisconsin when it lived — that honor went to wooly mammoths, whose very name today has come to mean "enormous."

But the stag moose is the largest-ever deer species in the history of North America.

But why are certain animals so big in the first place?

Take blue whales, which today live in every ocean except the Arctic. Weighing up to 330,000 pounds and as long as three school buses, blue whales are the largest animal in planet Earth’s history.

Blue whales are so gargantuan that each day, their calorie requirements can only be met by consuming up to 16 tons of food. How could an animal big enough to need the equivalent of 80,000 Big Macs every day possibly be a good idea, evolutionarily speaking?

Warren Porter is a professor emeritus of biology at the University of Wisconsin-Madison who studies animal shape and size.

"One of the evolutionary benefits of being a large or very large animal is … that you don't have to deal with as much threat of predation and may be able to better defend your young," Porter said.

In other words, would you want to fight the 165-ton bully on the playground? Probably not.

Big animals may have outsize food requirements, but evolution has blessed them with slow metabolism and long intestinal tracts, Porter said. Longer guts mean improved ability to absorb nutrients. Because of this, big animals are able to survive on abundant, low-quality food. Large animals actually require less nutritious food than smaller ones, even if they’re consuming a larger mass of it.

Evolution has also dealt large animals a counterintuitive survival mechanism called Peto’s paradox, which prevents them from getting cancer when — based on their size alone — they should likely get it. Because the chances of developing cancer increase with time and cell division, massive animals — which live longer and have more cells — should get more cancer. But they don’t.

In fact, cancer rates are roughly the same among all mammalian species, including humans, regardless of size and lifespan.

"It turns out that big animals end up duplicating, many times over, anti-cancer genes called tumor suppressors," Jesse Weber, an assistant professor in the Department of Integrative Biology at UW-Madison, said.

Less predation, the ability to thrive on junk food, decreased cancer risk — these are all great reasons to be a big animal. 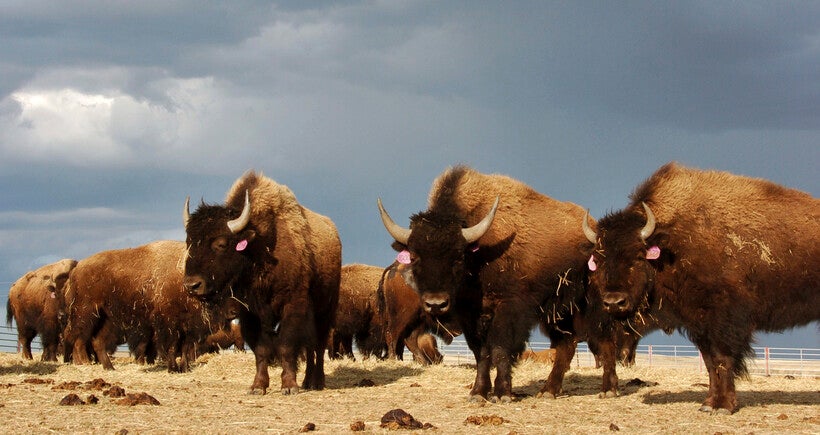 In an April 24, 2012, file photo, a herd of bison stand in a pen on the Fort Peck Reservation near Poplar, Mont. Montana Gov. Greg Gianforte has ended a bison management plan that would have allowed the wide-ranging animals to be restored in more areas of the state. The Republican announced Tuesday, April 20, 2021, that the state had settled a lawsuit brought the year before against the administration of his Democratic predecessor over adoption of the bison plan. Gianforte said he was acting to protect ranchers and farmers. Matthew Brown/ AP Photo

But there are many more reasons why it isn't easy being a behemoth.

It's not all rainbows and butterflies.

"I can think of a lot more evolutionary drawbacks than I can benefits for being large," Porter said.

Large animals tend to live longer, so time between generations is more spread out, which means it’s harder to adapt to changes in the environment.

"Cockroaches and flies and other insects (that don’t live very long) are famous for their ability to adapt very rapidly to new stressors… They can respond evolutionarily to new threats to existence, such as pesticides, extremely rapidly," Porter said.

Porter also noted that large animals require more stable environments, because it’s easy to overheat, and being big means it’s hard to find micro-habitats roomy enough to cool off in. If an animal is really massive, moving quickly isn’t easy, so migration to escape threats, or seasonal climate changes, is difficult.

Although they are threatened by climate change, research published last month found large animals are crucial to slowing climate change through their grazing habits. This includes, of course, those two Wisconsin greats: bison and moose.