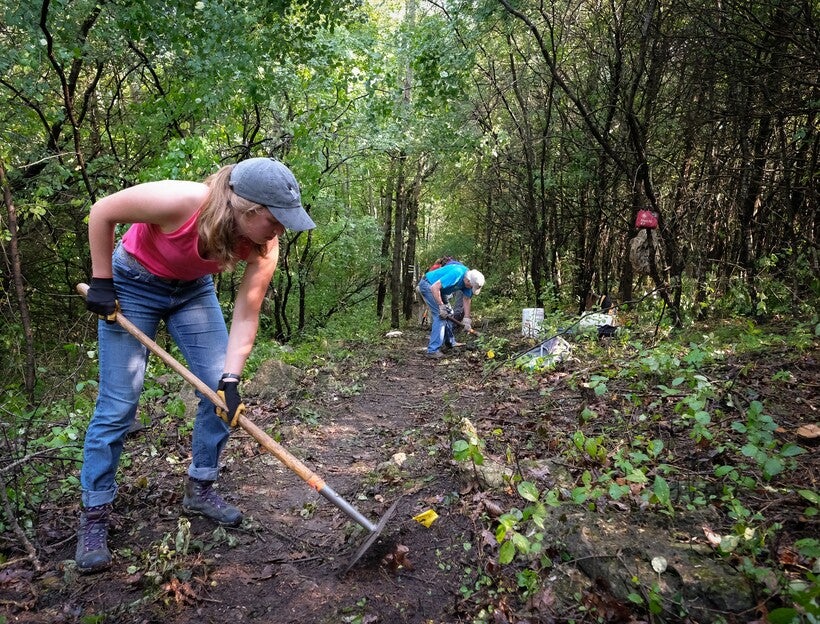 Volunteers work on the Cross Plains segment of the Ice Age Trail in Dane County.
Photo courtesy of Cameron Gille

A bill introduced by a bipartisan group of lawmakers would elevate the status of two Wisconsin trails and possibly bring in more funding to maintain and expand them. The legislation seeks to designate the Ice Age and North Country national scenic trails as units of the National Park Service, as well as the New England National Scenic Trail.

U.S. Sen. Tammy Baldwin, D-Madison, and Rep. Jim Sensenbrenner, R-Menomonee Falls, are sponsoring the legislation. The two introduced the bill last session, but it never made it to the floor for a vote.

The two trails are currently administered by the National Park Service in cooperation with other local, state and federal partners. However, Baldwin told Wisconsin Public Radio they don’t have full trail status. She said the bill would put the Ice Age National Scenic Trail and North Country National Scenic Trail on a level playing field with others in the National Park Service that receive funding.

"The federal government has been a major contributor to allow the trails to expand," Baldwin said. "It’s always a constant struggle of making sure that we can complete a trail like the Ice Age Trail before the land is developed."

Kevin Thusius, director of land conservation with the Ice Age Trail Alliance, said the bill would allow them to access funding only available to trails designated as a unit of the National Park Service.

"The Ice Age Trail Alliance and its partners at the National Park Service and other partners are working to close the gaps in the Ice Age National Scenic Trail by acquiring additional properties or additional trail rights between segments that are currently on the ground," Thusius said.

He added there are currently 670 miles of trail open for use. Once complete, the trail is expected to stretch more than 1,200 miles.

"The Ice Age Trail is a beautiful part of Wisconsin’s natural wonders and also a significant contributor to our state’s economy. According to a study by the University of Wisconsin-Whitewater, the trail has an annual economic impact of $113 million, drawing roughly 1.2 million visitors," said Sensenbrenner in a news release. A view from the Harwood Lakes segment of the Ice Age Trail in Chippewa County. Photo courtesy of Cameron Gille

The North Country National Scenic Trail crosses seven states from New York to North Dakota. Peter Nordgren volunteers with the Brule-St. Croix Chapter of the North Country Trail Association. He said the bill, if passed, may help expand the trail in northern Wisconsin.

"If we had the unit designation, we would be guaranteed a superintendent and that would be a leader that would help move the trail forward," said Nordgren. "It is the longest scenic trail in the United States, and there’s still plenty of work to be done on it."

The North Country National Scenic Trail is expected to stretch 4,600 miles once finished.