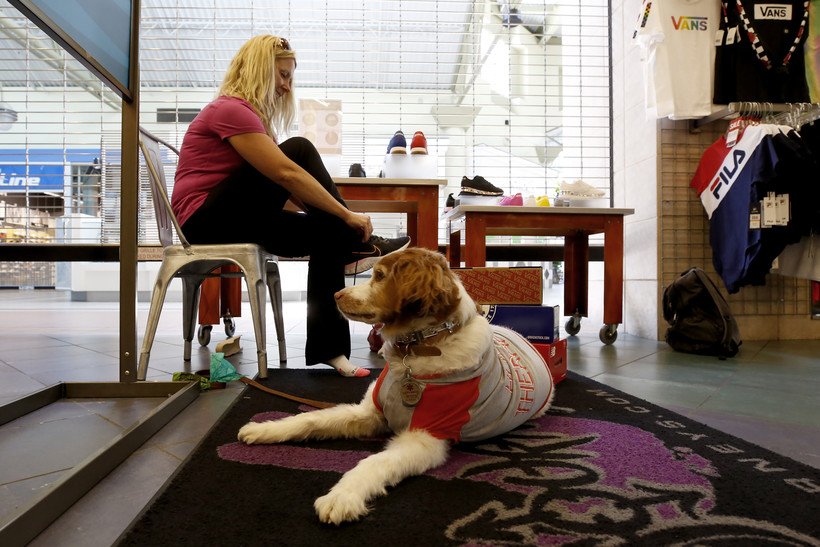 Jamie Riggs is accompanied by her dog, Sadie, as she tries on shoes at Journey's shoe store in the Yuba Sutter Mall in Yuba City, Calif., Wednesday, May 6, 2020. Several dozen shoppers streamed into the first California mall to reopen Wednesday, despite California Gov. Gavin Newsom's orders restraining businesses because of the coronavirus pandemic. Rich Pedroncelli/AP Photo

Wisconsin lawmakers are considering a bill that would allow more businesses to let customers bring their dogs along for shopping trips.

Under the bipartisan bill, the state wouldn’t be allowed to bar specific businesses from allowing dogs on site. Businesses would qualify for the exemption if they only sell prepackaged food and those sales make up less than 5 percent of their overall sales.

Current state law bars all businesses that sell food from allowing dogs on site. However, the state does work with individual businesses to grant exceptions to the rule, as long as the business agrees to certain criteria. Those exemptions have been given to businesses like restaurants, breweries and coffee shops that want to allow customers to bring pets along to outdoor dining spaces, according to the state Department of Agriculture, Trade and Consumer Protection.

Sponsors of the new proposal say it’s aimed at businesses like hardware stores and outdoor outfitters.

Speaking at a committee hearing on the plan Wednesday, Sen. Roger Roth, R-Appleton, said it’s important to hunters in his district to be able to bring their dogs into certain businesses.

"To be able to bring their dog with them into, say, a Fleet Farm or other type retailer when they’re going and picking out their gear and so forth would be an immense benefit," Roth said. "And there really is no reason why they shouldn’t be able to."

Frank Steeves, an executive vice president at Fleet Farm, told lawmakers many Fleet Farm customers are frustrated by the restrictions on bringing dogs into their stores.

"There is no issue, no single issue, that causes more anguish and anger to our Wisconsin customers than the Wisconsin laws concerning whether or not they can bring their dogs into our stores," Steeves said during the committee hearing.

In addition to allowing customers to bring dogs in for shopping trips, Fleet Farm would like to host events with local humane societies, as well as things like dog vaccination clinics, another company representative said.

No groups have registered their opposition to the bill.

The plan has already passed the state Assembly, where no lawmakers cast votes against it. It has yet to be voted on in the Senate.