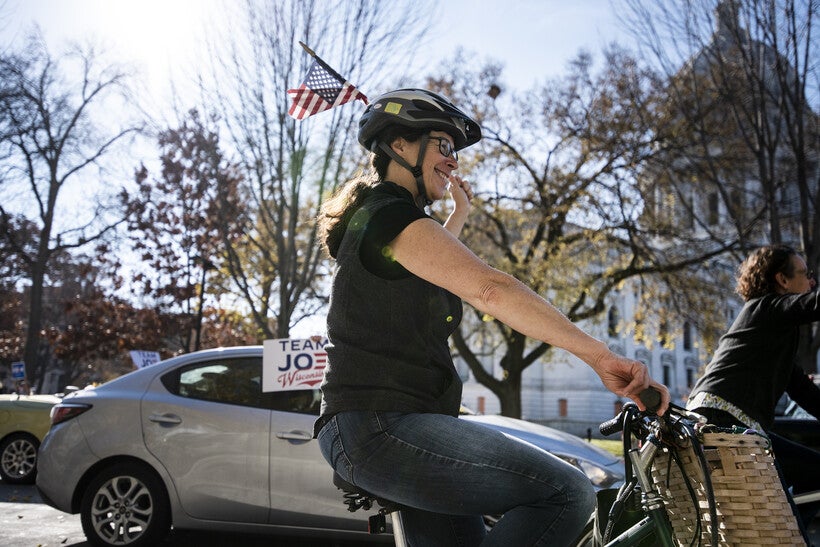 Supporters of former Vice President Joe Biden make laps around the Wisconsin State Capitol on Saturday, Nov. 7, 2020, after he was announced the winner of the 2020 presidential election. Angela Major/WPR

Supporters of President Donald Trump and now President-elect Joe Biden converged on the capitol in Madison Saturday afternoon, after the former vice president was announced the winner of the 2020 presidential election.

Tensions were high as protesters from both camps faced off on the steps of the Capitol building.

Hundreds of Trump supporters chanted "stop the steal" and said that Democrats were trying to steal the election "before our eyes." Trump has refused to concede, citing lawsuits over voting ballots.

Speaking to a crowd of Trump supporters, one protester said they didn't trust the legitimacy of the election. 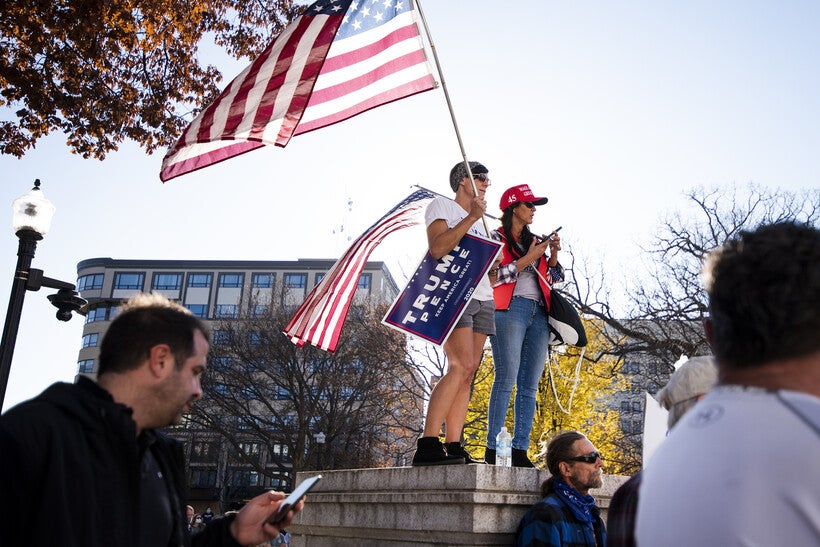 Supporters of President Donald Trump hold flags as they gather outside the Wisconsin State Capitol on Saturday, Nov. 7, 2020. Angela Major/WPR

Shyla, a Trump supporter who only wanted to share her first name, was critical of the press, saying it wasn't the media's role to declare a winner in the race.

"I believe right now it's more divisive than it is helpful for the news media to start projecting a winner when this battle is still being fought out in courts," Shyla said.

She added that, regardless, she's hopeful the country could come together. "Being American first is ... what matters," she said.

Trump supporters called out Republican elected officials for not showing their support for the "Stop the Steal" rallies, with one asking why Sen. Ron Johnson wasn’t there. The supporter encouraged the crowd to vote out any elected official who didn’t back their claims that Democrats are stealing the election from Trump.

In a statement about the election results, Johnson said that Trump would always be a winner and a patriot in his book, "regardless of the outcome (of the election)."

"In the face of coordinated efforts to undermine his administration from day one, and a mainstream media that shed all pretense of fairness, President Trump has tenaciously fought to make America better — and he produced remarkable results," Johnson said. "His unbelievably energetic reelection campaign efforts earned him 200,000 more votes in Wisconsin than in 2016 and once again made pollsters look ridiculous." 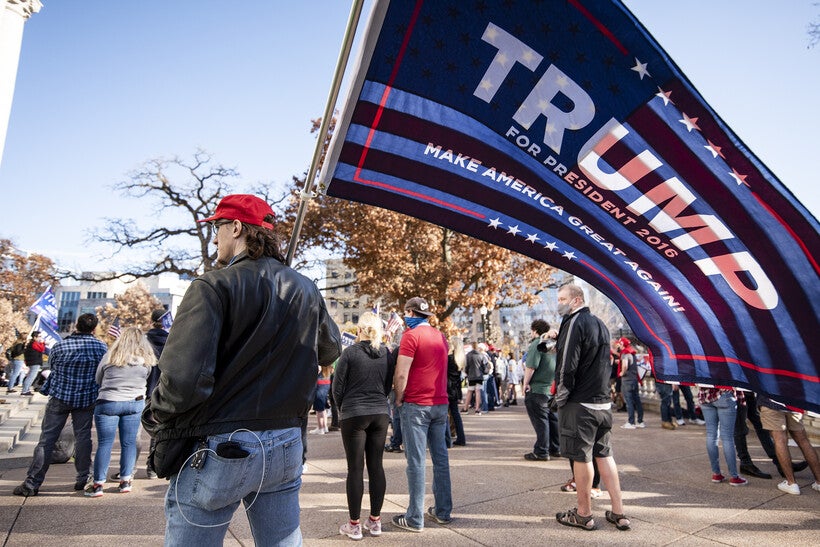 A supporter of President Donald Trump holds a flag during a rally Saturday, Nov. 7, 2020, outside the Wisconsin State Capitol. Angela Major/WPR

The news of Biden's win comes a day after Assembly Speaker Robin Vos, R-Rochester, said in a statement that he had called for an investigation of Wisconsin's election days after preliminary results showed President Donald Trump losing the state to Joe Biden by fewer than 21,000 votes.

A representative from Vos' office was not immediately available for comment.

On the other side of the Capitol, several hundred people in favor of Biden celebrated the news, dancing and cheering. Those celebrating Biden and Vice President-elect Kamala Harris also showed their alliance to the Black Lives Matter movement, chanting things such as "no justice, no peace."

Dan Campbell, a protester at the capitol holding a Biden sign, said he felt relieved when he learned of Biden's win.

"It's been going on since Tuesday. I've been following the news super closely and just to get that final, you know, 'This is what's happening,' 'This is the new president' ... it felt like a thousand pound weight had been lifted off of America," Campbell said.

Campbell acknowledged that emotions were running high, but said he took comfort in Biden's message of being a president for everyone.

"I think that should be a message everyone should get behind," Campbell said. "I hope we can ... bridge that divide, but there are a lot more people who were okay with the last four years than I was expecting." 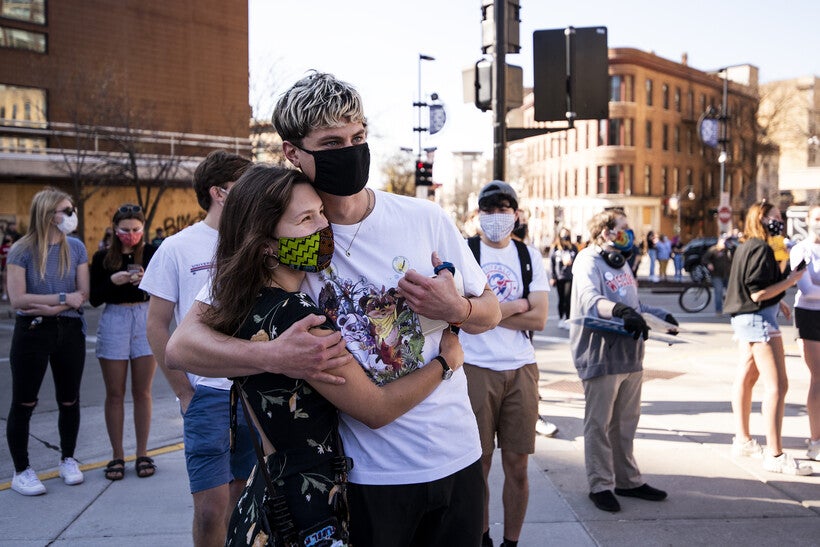 Elsewhere in Madison, a city that heavily favors Democrats, people were dancing and cheering in the streets, with car after car honking their horns in celebration.

After the news was announced Saturday morning, Alma Princip, a Madison resident, was playing "We Are The Champions" from a speaker on a street corner in east Madison. Princip said she was thrilled that Biden won, adding it feels like "liberation day 1945."

"I was just hanging out at home and then I heard screaming, cheering and honking, and I thought, 'Oh no, is this what's going on,'" Princip said. "I ran out and everybody was clapping and banging instruments."

Matthew Banks, a Madison resident, who was cheering and dancing on a street corner on the east side of Madison, said he felt enormous relief when he heard the news and felt "joy that we finally got our act together to do the right thing." 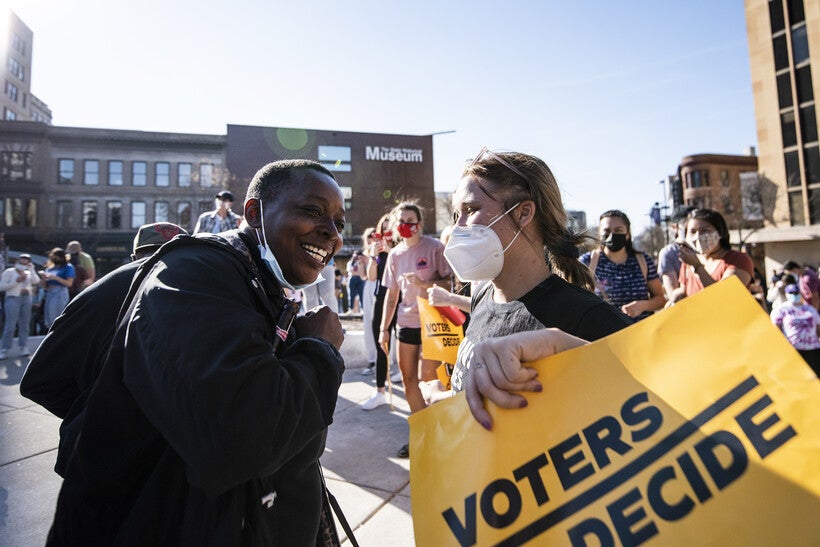 Banks said he hopes to see the country come together now.

Sen. Tammy Baldwin wrote on Twitter: "A son of Scranton and daughter of immigrants are heading to the White House. Thank you, Wisconsin. Thank you, America."