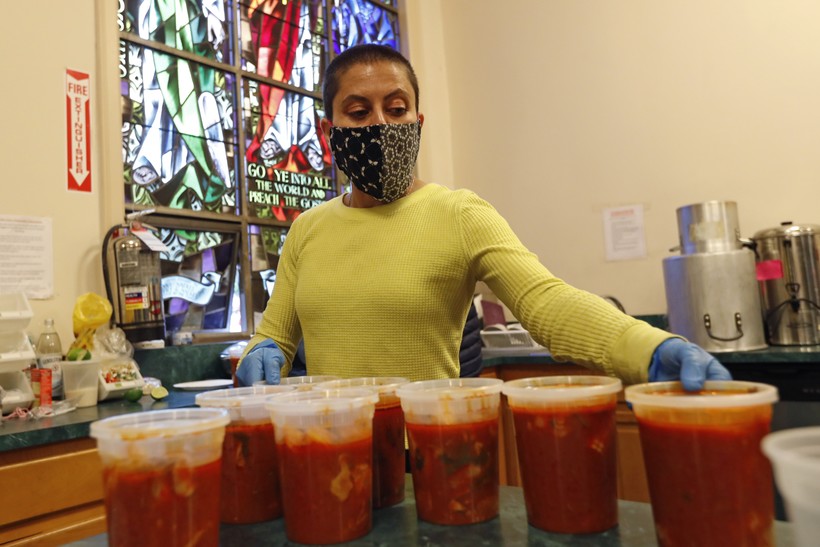 Brooklyn Immigrant Community Support volunteer coordinator Amy Khoshbin lines up quarts of chilate de pollo at Lutheran Church of the Good Shepherd in the Bay Ridge neighborhood of Brooklyn on Tuesday, May 12, 2020. The food was distributed by other volunteers to members of the community in need, especially those quarantined or unable to leave their homes. The mutual aid group was formed in the wake of stay-at-home orders that caused thousands of layoffs amid concerns over the spread of the new coronavirus. Kathy Willens/AP Photo

Better Together: Mutual Aid Groups Swoop In To Help Neighbors In Need

Groups Illustrate Breadth Of Need In Communities, Embolden People To Be Part Of The Solution
By Elizabeth Dohms-Harter
Share:

Mutual aid groups have risen in popularity in Wisconsin over the course of the COVID-19 pandemic and are being used to leverage resources to help those in need.

Volunteers get together to form these community-based aid organizations that provide services to community members in need, said Laurie Marks, executive director of the University of Wisconsin-Milwaukee Center for Community-Based Learning, Leadership, and Research. Marks added that volunteers can also receive aid from the group as needed.

Historically, these groups have been around for a long time, and in simple terms could describe the helpful relationship that neighbors had for each other in meeting basic needs, whether that was barn-raising or fighting fires. Without a robust infrastructure in place, community dependency was crucial.

"We oftentimes think about survival in terms of survival of the fittest," Marks said. "(Mutual aid) leans into this alternative perspective where survival can really be based in cooperation amongst community members," she said.

Dane County Neighbors Helping Neighbors is one such mutual aid group that operates on Facebook and has almost 14,000 members and thousands of posts since it was created in March, at the start of the pandemic.

"I think COVID exposed a lot of gaping weaknesses in our society, and I think a big part of the response and what I'm trying to do is making people feel closer to their communities, and a big part of that is giving people a platform to help people around them," said Paulo Delgado, who established the Facebook page. By day five of the page being launched, it had 6,500 members, he said.

Some members of the page post encouraging notes. Some ask for specific items, like old rugs or a baby carrier, and some post items they'd like to give away to people who need them. Delgado said he's seen posts of members asking for help with jump-starting their vehicles and other members jumping in to help out.

"I think that's a big part of the reason Facebook is a good tool for something like this," he said.

Marks sees social media as a way of helping bring mutual aid groups into the mainstream, when in the past these groups were sometimes perceived as radical and politicized.

"It's a platform where they're empowered, and they can show solidarity," she said.

Marks said the establishment of these groups could be a silver lining to the pandemic, because it helps illustrate the breadth of the need in communities and emboldens people to be part of the solution.

Relationship building is another positive outcome, she said.

"People will have relationships through mutual aid groups that they may not have had, had the group not brought them together," she said.

That's similar to what happened in Green Bay with the launch of the Greater Green Bay Mutual Aid Network, founded by Amaad Rivera.

Rivera and his partner, a frontline health care worker, were talking over dinner one evening about his experience seeing numerous meat-packing employees in the emergency room. It wasn't until about two weeks later that it became clear that COVID-19 had spread rapidly throughout several meat-packing plants.

"Green Bay was ground zero for what then became a larger hotspot for the rest of 2020," Rivera said.

Concerned that these families and other families impacted by COVID-19 might lose their jobs and income, he established the Facebook page.

Rivera said his goals for the Facebook page are twofold: to provide resources to families that need services and support because of the impact of COVID-19, and to provide a space where people can come together online.

A large focus for his group, he said, was connecting families who were under quarantine with food pantries and delivery drivers who could drop off those groceries. There also was an interest in finding volunteers who would help meet the families' food culture needs, specifically noting the large Asian American and Pacific Indian, Black and Latino populations in northwestern Wisconsin.

"Regardless of where you came from or what language you spoke or what side of the aisle you are, that people deserve to get supported and helped was such a beautiful, beautiful thing that I was really proud to be a part of," Rivera said of his mutual aid group.

The Rise Of Mutual Aid Groups During The Pandemic 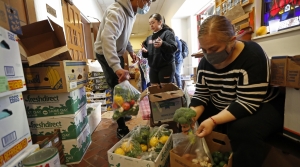 As the COVID-19 pandemic slowed the U.S. economy, there was a rise in the number of mutual aid groups established to meet the needs of people struggling in their communities. We talk to the founders of two Wisconsin-based mutual aid groups. And we speak with an expert about the role these organizations could play throughout the rest of the pandemic and beyond.