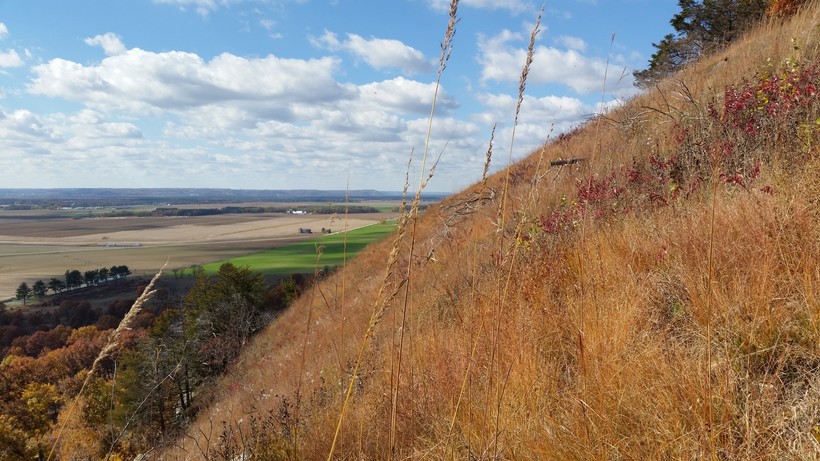 Believe It Or Not, A Slice Of Desert-Like Environment Thrives In Southwestern Wisconsin

Prickly pear cactuses are probably the last things you’d expect to see on a walk in Wisconsin. But surprisingly enough, there’s one area of the state where you’ll find them, as well as numerous other desert-like features.

The Spring Green Preserve is a state-designated natural area in southern Wisconsin where bluffs, prairie, and sand dunes come together to form a unique environment that’s well-suited to the needs of desert plants and animals.

"The preserve and the surrounding area are part of the original floodplain of the Wisconsin River," said Hannah Spaul, director of conservation land management in Wisconsin for The Nature Conservancy, which manages the Spring Green Preserve. "There’s just a lot of sand in the area, and so the bluffs and the flat areas at the base of the bluffs are very sandy soils."

Those sandy soils are the key to the desert-like conditions, along with other factors.

"It’s a combination of the moisture infiltrating into the ground really quickly, but also an incredible amount of sun exposure, and so things just dry out very fast there," Spaul said.

Those arid conditions have allowed desert-like flora and fauna to thrive, including the prickly pear cactus. Despite the plant's small size, it isn’t too hard to find in the area. "From the minute you get out of the parking lot and start hiking, you’ll really notice it," Spaul said.

Insects are also plentiful on the preserve. In addition to a variety of butterflies and spiders, Spaul said it’s also a place to see a variety of more unique tiger beetle and leafhopper species. Evidence of reptiles and rodents can be seen, as well, including the burrows and holes created by pocket gophers.

Visitors are encouraged to come and check out the preserve, but Spaul said there are a couple of rules to keep in mind, in order to ensure long-term survival of the area — mainly, stay on the trails, and don’t disturb or collect anything you see.

"A lot of the vegetation there is sensitive to foot traffic, so if a lot of people are walking off the trail and stepping on those delicate cacti and other plants, that will have an impact over time," she said.

Spaul recommended visitors check out the preserve in April and May, although she said mid-June features the cacti in full bloom.

While the Spring Green Preserve falls short of being a full-on desert, Spaul said it comes pretty close to the real thing — something that's quite a feat here in Wisconsin.

"I would argue that if you were out on the preserve in the middle of the day this time of year, it would definitely feel like a desert," she said. "The sun really beats down, and it gets very, very hot out there."