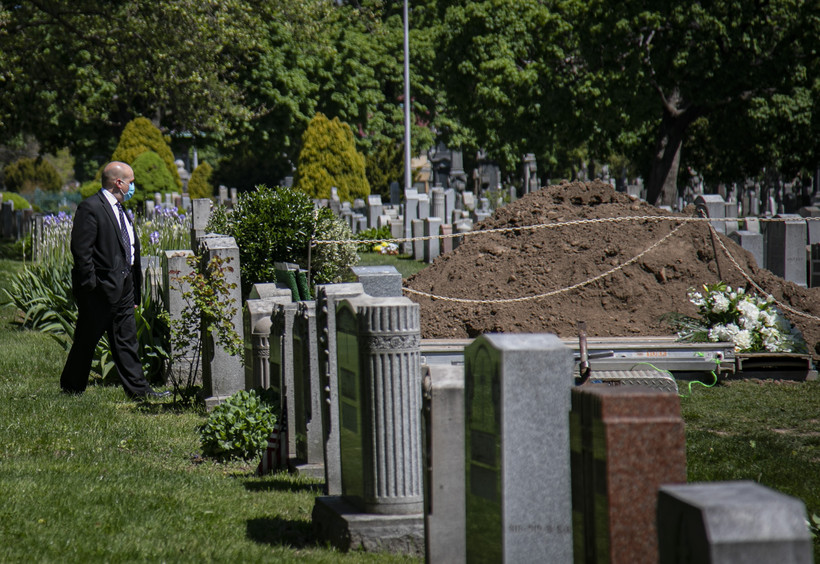 Robert Salerno, funeral director with McLaughlin & Sons funeral home in Brooklyn, wears a mask as he reviews a gravesite, shortly after a burial without family present because of coronavirus restrictions, Wednesday, May 13, 2020, at Holy Cross Cemetery in the Brooklyn borough of New York. To help prevent the spread of the coronavirus, the casket is lowered and covered before relatives are allowed to the gravesite, following guidelines from the National Funeral Directors Association, according to a spokesman for the funeral home. Bebeto Matthews/AP Photo

Being A Mortician In A Community Ravaged By Coronavirus Pandemic

An Epidemic Of Gun Violence Did Not Prepare Funeral Director Tyrone Muhammad For What COVID-19 Would Mean For Mourning
By Charles Monroe-Kane
Share:

Editor's note: This story includes language some may find offensive.

It's a typical Friday afternoon in Newark, New Jersey.

There's a group of young black men milling around the liquor store on the corner of South 15th and 10th streets, and then a van pulls up. On one side, there's a painting of Tupac Shakur. On the other, photos of dead bodies, bodies of young black men killed in gang violence. A coffin is painted on the roof of the van, and in big orange letters on the coffin are three words: "stop the killing."

He's the funeral director at Newark's Peace and Glory Home for Funerals. And he spent decades trying to stop the epidemic of gun violence in his community. But he told Charles Monroe-Kane of "To the Best of Our Knowledge" that nothing prepared him for the coronavirus pandemic.

This transcript has been edited for clarity and length. Please note some comments contain disturbing descriptions of funeral homes.

Charles Monroe-Kane: It's 2020. And we have a very different and just off-putting problem right now. We have the coronavirus hitting the black community hard. What does it look like on the ground with the coronavirus for a black mortician?

Tyrone Muhammad: Very sad. It's very sad because we weren't prepared for it. I think America itself was not prepared for it, particularly in the black community. It hit hard, March 23 in our community, it went crazy.

CMK: That really surprises me. You're naming an actual day when coronavirus hit the black community. What happened that day?

They were dropping everywhere, in the houses, at the hospitals. People were calling. We weren't prepared.

We had 210 people in our funeral home in eight days. We realized we couldn't catch up. That's when the storm hit. We were scared. We were stuck. And we weren't sure what to do.

I now call it "The house of horrors" to this day, because what's going on right now inside the funeral homes is a disgrace. And not just ours, but in most of them right now, particularly in New York and New Jersey. 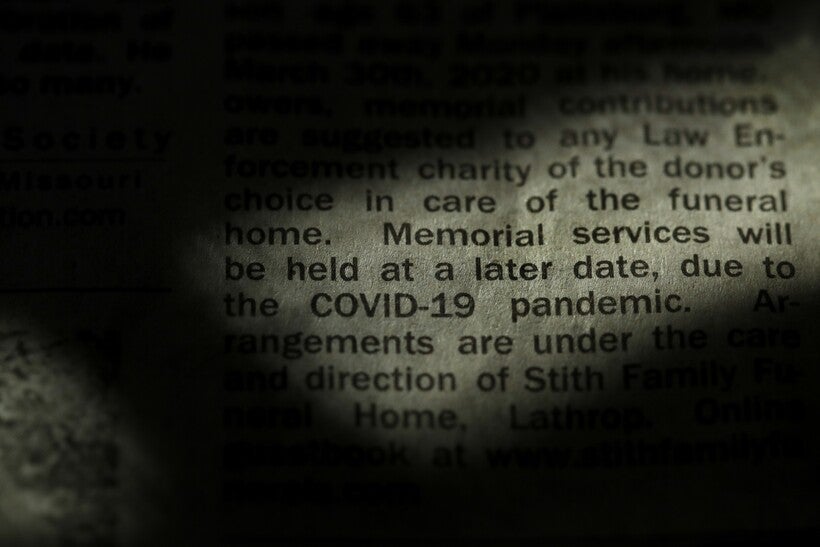 An obituary in the Kansas City Star newspaper details the effect of the COVID-19 pandemic on traditional funeral services, Sunday, April 5, 2020, in Overland Park, Kan. Most funerals now are either small private services with a public memorial service sometime in the distant future or no public service at all in response to social distancing and stay-at-home orders implemented in an effort to stem the spread of the new coronavirus. Charlie Riedel/AP Photo

CMK: You're a mortician. You're also a human being. And as a mortician you touch the dead bodies. You see the pain. How do you stay strong during something like this?

TM: Man, up to this point, I was doing very well. I mean, this is my passion. I believe that I was born into this because I have a gift. It's easy for me to make somebody that looks disfigured look good. I'm used to it. I love helping people, but I'm, in a sense, sunk in place at this point because the funeral homes have become, as I said, a house of horrors.

I’ve got at least 80 people who already had funerals since March 25 that we (are still holding on to) until June 1 because the cemeteries won't open up the gates. So now what do we do? So now we walk into the funeral home with a death stench that is reeking in our carpets because we have literally 150 people on floors, on wooden planks. We've got them on stretchers. We have makeshift stairs, and they are literally rotting because we can't bury these people. It is undignified to leave them there. There's a health hazard to us.

CMK: You just can't have a funeral either, right? How do people grieve? How does the community grieve?

TM: Right. That's what I'm saying. There are no more tearful goodbyes at this point because this is the way it works right now.

Executive Order 108, according to (New Jersey) Gov. (Phil) Murphy, (says) only 10 people could come to your service.

Mayor Ras Baraka, the mayor of Newark, New Jersey, knocked it down from 10 to five.

So we had an incident about two weeks ago where this woman had seven children. We could only allow four children and one sister. The sister bumped one of the children, and they started fighting and had an altercation outside. That is disgusting. But at the same time, you've got five people who can only come into the funeral. But right down the street from the funeral home, you've got 12 and 13 people in a liquor store. I can't rationalize that. You can have 13 people in a liquor store using social distancing, but you can only have five people pay any goodbyes to a person that gave birth to you. I don't understand it.

CMK: I have one more question for you, and I fear it's could come across as crass or privileged, but I really want to ask you. It seems that your community, the African American community, is well-rehearsed in grief. White America, for the first time ever maybe, is starting to grasp a collective pain due to the coronavirus. I don't think we're handling it very well. What do we need to know? What should we be doing about the pain we're in?

TM: You know what? I think it goes to show you that your privilege, white American privilege, can be revoked at any time. Just as ours.

I think, finally, white America knows our pain. And we know what is going on in this country and what it takes to change. You’ve got to remove fear and speak out on truth.