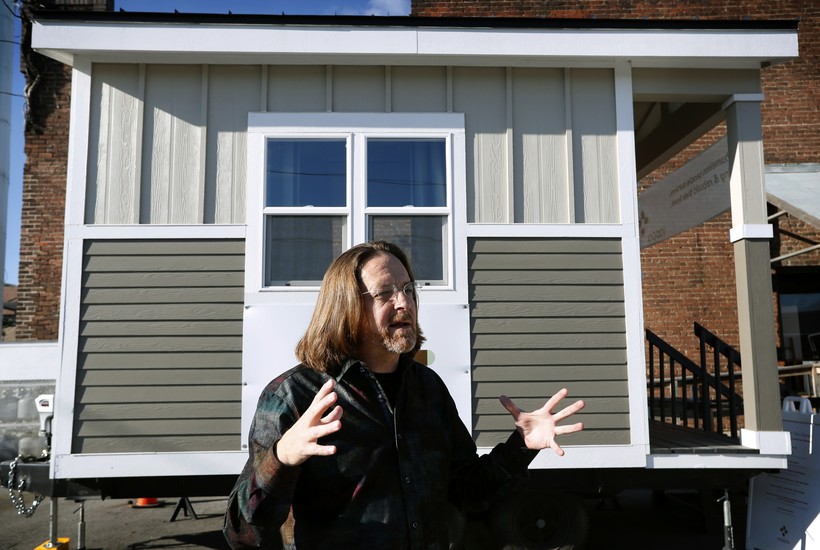 In this Wednesday, Oct. 11, 2017, photo, Joe Stevens stands in front of one of the tiny homes his group has built, in Des Moines, Iowa. Charlie Neibergall/AP Photo

The Beginner's Guide To Tiny Homes

Driven by affordability or minimalism, some Americans are flocking to tiny homes in an age where home sizes have begun to shrink after peaking in 2015.

"We have, over the past few generations have adopted ... a pretty large footprint for homes. And this is not typical," said Chad Speight, who owns Chad's Design Build, a renovation and construction contractor in Madison. "You can go to Europe where some of these countries have a higher standard of living but a much smaller typical home. We’re accustomed to having really large homes, and so the tiny house movement is a pretty strong reaction against that."

Moving to a smaller home, even if it’s not a tiny home, Speight said, can be easier said than done. It’s an adjustment.

"But once you start doing that it gets easier and easier to go smaller, because there are only a few things you need to live comfortably," he said.

In Chetek, vacationers can rent out tiny, 344- or 400-square-foot homes near Canoe Bay resort. But nationally, cities like Detroit and Portland see tiny homes as a potential solution for homelessness and a path to homeownership for low-income adults.

They build them out in the yard right next to the school.

"A tiny home is a perfect size project for us to finish in our one year or two semester programs," said John Stephany, program director and instructor at the college. "They frame the entire thing, the floors, the walls, the roof. They hang the drywall, they install the flooring, the cabinetry. They do all the work on it except for the electrical and the plumbing ... we can talk about things in the classroom … and then walk right outside and work in this tiny home."

The homes built there are then transported elsewhere in the state, and sold at cost.

As Stephany points out, modern-day appliances are relatively compact and suited for small homes. Stackable washers and dryers fit right in a closet; tankless water heaters are more energy-efficient and can even be installed outside.

The base cost of a tiny home can be much less expensive than a typical home. You can purchase a tiny home kit for $60,000, which is hundreds of thousands of dollars cheaper than the average American home.

However, per square foot, the price for a small home seems much more expensive. But that’s not the right way to look at it, Speight says.

"With a car, as with a tiny home or any home, there’s gotta be certain things that have to be there. Those all have a certain inherent cost," he said.

The kitchen, the bathroom — those things are nonnegotiable, and keep the base price high.

"The typical starter or mass-produced tiny house is gonna be built at a pretty affordable rate comparable to that of a typical home that would be built in a typical development for a square footage cost," he said.