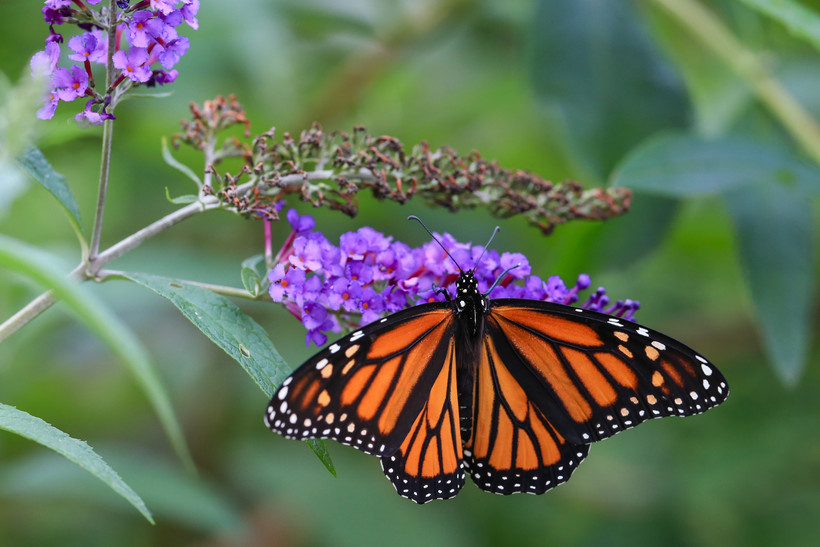 People across the state of Wisconsin are seeing an increase in monarch butterflies, and the distinctive orange and black winged insect isn't here by chance.

Wisconsin and other Midwest states are right in the middle of the monarch migration trail or flyway. During spring and summer, the butterflies travel north toward Canada to repopulate. Now they are preparing to migrate south for the winter.

"What people are seeing when they are looking into their backyards and along the shores of Lake Michigan, they are seeing a part of a huge wave of monarchs that are moving south right now," said Karen Oberhauser, director of the University of Wisconsin-Madison's Arboretum.

Oberhauser explained that monarch butterflies have a four-generation migration strategy. Right now, people in Wisconsin and the Midwest are seeing the fourth generation of butterflies. The first generation starts in Mexico, as monarch butterflies stay in the mountains of Mexico all winter. When they begin to migrate north during the spring they start to reproduce and repopulate, these are the second and third generations.

The butterflies being seen now are the offspring of the butterflies that migrated from Mexico last winter. Monarchs spend most of the summer in the northern part of the United States and southern Canada.

Barbara Agnew with the Friends of The Monarch Trail, which maintains an annual roosting area for migrating monarchs in Wauwatosa, said they can fly nearly 2,500 miles to get to Mexico.

The population of monarch butterflies has been in decline for several years, but numbers are increasing due to good weather conditions and proper nesting spots. Agnew and others calls this the "Goldilocks effect."

"In the past 20 years monarchs have been declining, but in the past two years they have had good weather," Agew explained. "They have had a little bit easier winters in Mexico, so the Monarch population has been able to increase."

"Even though it seems like there's just a ton now, they're simply getting back up to where they should be and we've got a long way to go," Agnew continued.

Through August and October numbers are high as the butterflies prepare to migrate, but they will be headed south toward the end of October.

Related Links:
WisContext: How To Get Started With Aiding Monarch Butterflies At Home