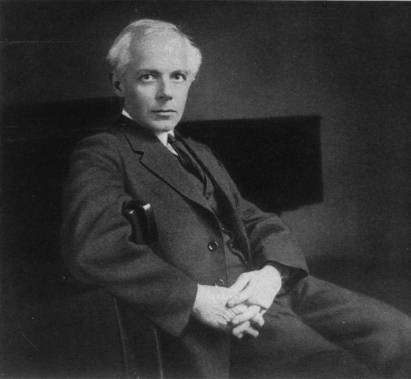 He became known for his turbulent modernism and became one of the most honored composers of the twentieth century. But Bela Bartok was a modest, retiring man who was inclined to view honors with a sense of humor.

In the 1930's, as a member of the Congress of Humanistic Sciences Bartok attended a meeting in Geneva. Included was a glittering dinner at the Hungarian ambassador's residence. Bartok took it in stride. He wrote:

There was only X-the Hungarian charge d’affairs, myself, and his wife -- a detestable female. The ambassador's wife is American, speaks only American but makes a show of being Hungarian. There were such artfully crafted delicacies that I hardly remember eating anything like them. And yet the dinner was not enjoyable because, aside from the shrill shrieks of Mrs. X, these polished diplomats are artificial people, very unlike artists.

From Geneva Bartok went to Mondsee to teach at a summer school -- the Austrian-American Conservatory. The faculty was a distinguished group of musicians, but again the reality did not live up to the glamour of the place. Because of sloppy planning, most of the students didn't show up when the session started and so the two women who had organized the school decided to study with Bartok. He wrote to his mother:

Now I have three regular pupils -- three for piano, not bad, one for composition --passable, one only for harmony -- all three girls, plus the old witches. A sixth wanted to study harmony with me, but didn't even know the scales well, and I said no to that!

At a reception for a visiting dignitary, faculty members were asked to wear their medals from the Legion of Honor. Bartok opened an old-fashioned coin purse, took out the decoration, and secretly offered it to a fellow faculty member. When asked why he was carrying the decoration in his coin purse, Bartok replied that his mother had put it there.Bela Bartok took honors in stride, even after he became a celebrated composer in the 1930's.