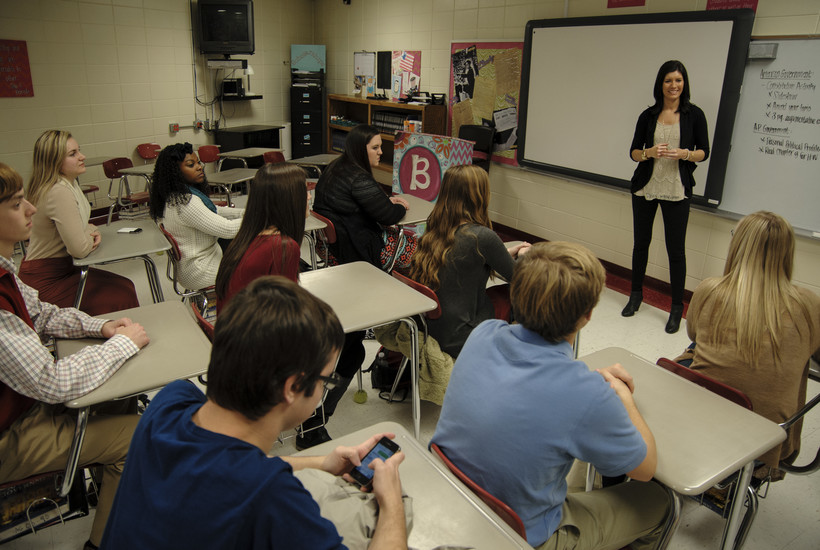 Teacher Sheri Brown, talks to the group of scholarship winners in her classroom during the H&R Block Budget Challenge Guntersville, on Friday, January 16, 2014 in Guntersville, Ala. Photo by Jeff White/Invision for H&R Block/AP Images

As the 2018-19 school year gets under way, school districts across Wisconsin are continuing bans on cellphones in the classroom that school staff say have been helpful in lessening distractions during class.

Metropolitan and rural school districts alike have adopted such policies, with a rash of school leaders agreeing it was the right move after the technology proved too distracting.

"It was a constant distraction for kids and what it became is a constant discipline issue," said Robin Kvalo, principal to about 800 students who attend Portage High School. A sign explaining the cellphone policy in the Portage Community School District is displayed in the commons. Photo courtesy of Robin Kvalo

A Wisconsin Department of Public Instruction spokesman said the state agency doesn't track individual district's policies, which vary across the state. For example, some school districts find it better to let teachers decide whether to allow the technology in their classrooms as a tool for instruction.

But constant use of cellphones throughout the school day is an issue, some administrators say, and the bans only extend to the classroom and allow students to access their phones during passing time or at lunch.

The Portage Community School District is one of the school districts that recently adopted such a policy, which was implemented after being approved by the faculty in spring 2017.

Kvalo said the plan was driven by the faculty and supported by the administration, with all teachers agreeing to confiscate phones being used in the classroom.

Prior to the policy, Kvalo said cellphone use in classrooms was at the discretion of the teacher, but that option proved unnecessary because most high school students were equipped with Google Chromebook computers they could use to access internet in the classroom.

In the south-central Wisconsin city of Portage, Kvalo said the school confiscated more than 200 phones last school year. Most students learned not to take their phones out after losing them the first time, she said.

She thinks the policy is successful because teachers and administrators are consistent with discipline and the students expect it.

"They are not distracted anymore," she said. "The phones are not their preoccupation. They know they can't have the phones in the classroom. If that had been the case years ago, we wouldn't have needed the policy."

For Kvalo and other school administrators, consistency is often the best approach when dealing with problems related to cellphone use.

Creating that expectation of discipline has reduced problems at the Drummond Area School District, where cellphone use is an occasional issue for the 360 students who attend pre-K through 12th grade, said superintendent John Knight.

For some students at the Menomonee Falls School District, it was confusing to follow different rules for different teachers. The district remedied that by creating a consistent policy banning cellphones in the classroom, Superintendent Corey Golla said.

For the district of about 5,000 students in southeastern Wisconsin, Golla said banning cellphones in classrooms was introduced as a "pragmatic" approach to the issue of distraction, instead of punitive, by explaining to students that there is a time and place to use cellphones and class time isn't it.

Golla said he was surprised by how well the policy, implemented at the start of last year, was received by students, noting that administration used language relating more to workplace and job skills to push the message.

After staff members at Menomonee Falls were surveyed halfway through the school year last year, more than 75 percent said the new policy had a positive effect and students were less distracted. Another surprise was that there was less pushback from families, Golla said.

"The overall feedback from families was, 'Thank you,'" he said.

In some school districts, teachers reserve the right to allow or restrict cellphone use in the classroom. For example, Green Bay schools, with a population of about 21,000 students, allow students to possess their phones in the classroom, and can use them if the teacher or principal allows.

Lori Blakeslee, director of communications and public relations for the district, said principals agree that cellphones can be a problem, but they're also useful tools.

"Cellphones can be a distraction, but at the same time there are instructional practices which can utilize cellphones and engage students that have always had technology in their hands," she said.

The Sparta Area School District in western Wisconsin has the same sort of policy, with superintendent Amy Van Deuren saying cellphone usage isn't complained about by principals any more than other types of behaviors.

The policy for the district acknowledges cellphones can be used for instruction, but can also be confiscated if used inappropriately, for example in a locker room or bathroom.

Because all of the students at Portage High School have Chromebooks, Kvalo said there's less need for cellphones as a tool for instruction.

Many school districts in recent years have purchased Chromebooks for students as devices they can use both at school and at home, which ensures they can access the internet during the school day by signing into the district's network.

That district recently asked its village to approve an ordinance that would allow students to be ticketed for repeatedly violating its cellphone policy, but it failed on a 7-0 vote.

"The cellphone need (as) a portal for learning is not necessary anymore," Smasal said. "When it's not necessary ... it can easily become a distraction or a safety concern. We'd like to limit that."