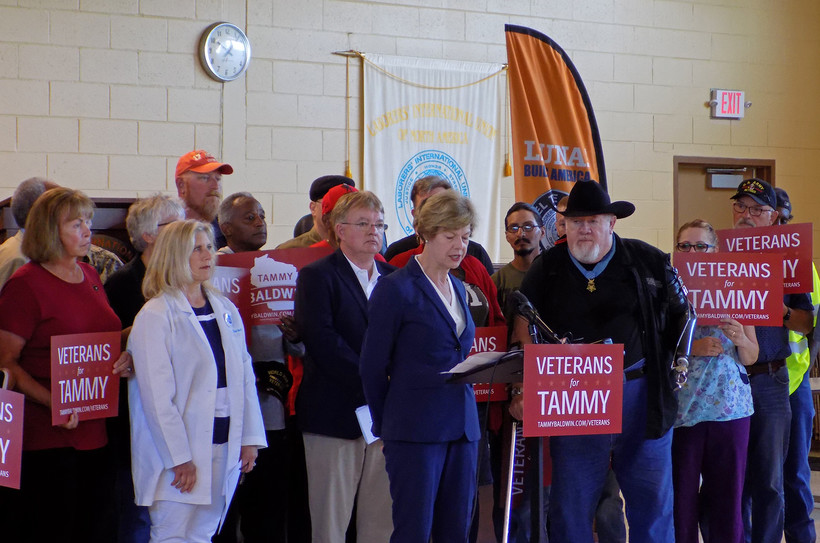 More Than 100 Veterans Across Wisconsin Back Baldwin
By Ximena Conde
Share:

United States Sen. Tammy Baldwin, who is seeking re-election, said she's the candidate looking out for veterans' interests. With more than a dozen U.S. veterans standing behind her in a Milwaukee union hall, Baldwin introduced a new coalition, Veterans For Tammy, comprised of more than 100 former armed service members from across the state.

Baldwin and her supporters touted her ability to work across party lines to champion veteran medical care and employment.

"I like the work that she does in stepping over the line to vote on issues," said Gary Wetzel, a Medal of Honor recipient backing Baldwin.

The display of support for Baldwin comes at a time when her opponent, Republican state Sen. Leah Vukmir, is slamming Baldwin's response to a 2014 report detailing inappropriate opioid prescription practices at the Tomah Veterans Affairs Medical Center.

On Thursday, Vukmir's campaign posted a copy of a 2015 ethics complaint an ex-Baldwin staffer filed against her former boss. In it former Baldwin employee Marquette Baylor claimed she was blamed for the handling of the report in order to protect Baldwin's career.

"We are going to continue to hit her over the head with this," Vukmir said during a talk-radio appearance Thursday, where she accused Baldwin of trying to cover up the report's findings which Baldwin denies.

"It concerns me that anyone would politicize veterans issues at any time," Baldwin said Friday, touting her response to the 2014 report.

Baldwin would proceed to write Jason's Law, a bi-partisan piece of legislation, aimed to stop the overprescription of opioids. Her campaign boasts a 47 percent decrease in the number of veterans given opioid prescriptions in the Tomah VA facility since the passage of the bill.

"When there was a vote to authorize the Department of Veterans Affairs to provide our veterans with substance abuse treatment, Leah Vukmir voted no," Hartke said, adding bi-partisan efforts are required to overcome opioid abuse in the community.

Still, Vukmir and her campaign are not backing down.

"Bottom line: Senator Baldwin let our veterans down, and Leah Vukmir is a military mom who voted for the $8.9 million crisis intervention services and women veterans grant and will always fight for our veterans," said Jess Ward, Vukmir's campaign manager and veteran, in an emailed statement.

Editor's note: This story has been updated to identify the Medal of Honor recipient as Gary Wetzel.