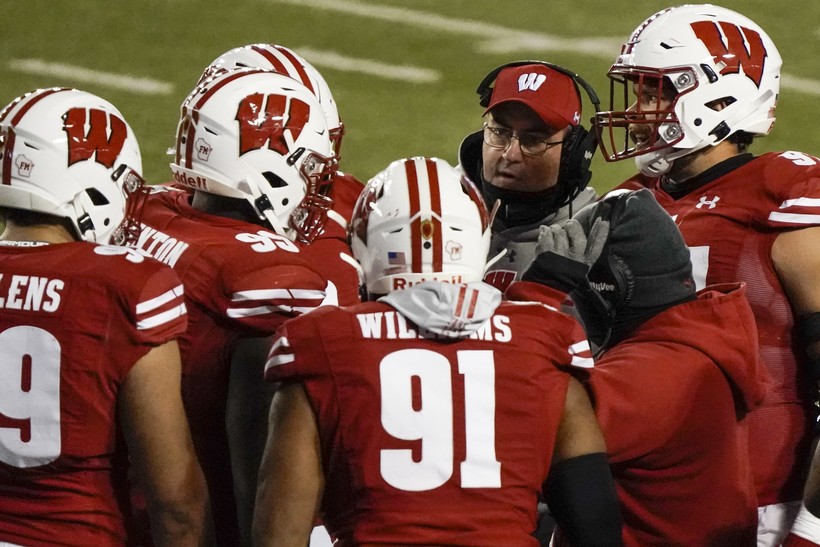 Wisconsin head coach Paul Chryst talks to his players during the first half of an NCAA college football game against Illinois Friday, Oct. 23, 2020, in Madison, Wis. Morry Gash/AP Photo

The No. 13 Wisconsin Badgers haven’t played a game since they opened their season Oct. 23. But that’s set to change Saturday, when they’ll face the Michigan Wolverines in Ann Arbor.

During the layoff, more than two dozen players and staff members tested positive for the coronavirus. University of Wisconsin-Madison Chancellor Rebecca Blank and Athletic Director Barry Alvarez made the decision to pause football activities on Oct. 28. That meant canceling games against the Nebraska Cornhuskers and the Purdue Boilermakers.

It was difficult to watch Wisconsin’s ranking slip when the team couldn’t play, wide receiver Kendric Pryor said this week. But there’s adversity every season, and this year, every team is facing challenges due to the coronavirus, he said.

"It may have hit us a little bit harder than it hit other people, but it’s how you bounce back from it," he said.

The Badgers resumed conditioning workouts a week ago and held their first padded practice Tuesday, according to head coach Paul Chryst, who was among those who tested positive for the virus. 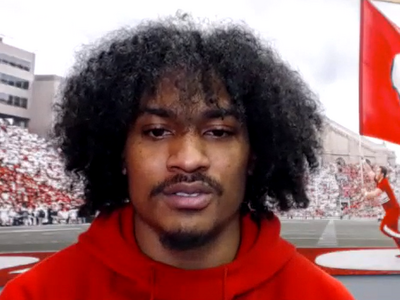 Wisconsin Badgers wide receiver Kendric Pryor talked to reporters on Tuesday, Nov. 10, 2020, about returning to play after a two-week layoff due to coronavirus. Megan Hart/WPR

"It’s been really good to be able to be back on the field and practicing. I appreciate the way that the players, coaches — really everyone — the effort they put in this week. It’s been good to be preparing for a game," Chryst told reporters Thursday.

As of Monday, there were two remaining active infections among players, according to UW Athletics. The Big Ten requires players to sit out of competition for at least 21 days after they’re confirmed to have the virus, regardless of their case status.

Some Wisconsin players are still in COVID-19 protocol, Chryst said. As of Wednesday, that included standout freshman quarterback Graham Mertz, according to offensive coordinator Joe Rudolph. Mertz threw just one incompletion in Wisconsin’s opening weekend rout of the Illinois Illini.

"Whoever is going to play, I feel good with it. I do feel confident," Chryst said.

It will be a high-stakes matchup Saturday. The Badgers are already playing a shortened season due to the pandemic, and the recent cancellations mean every game will carry even more weight.

Meanwhile, the Wolverines have gotten off to a rocky start, with one win and two losses this season, and the pressure is mounting on head coach Jim Harbaugh.

The game marks the first road trip of the season for the Badgers. Wisconsin will bring in extra buses so that players and staff can spread out more, Chryst said. The team will also forgo its traditional Friday night meeting at its hotel.

"I think what’s different is going to be maybe some of the details, but the big overall picture, purpose, isn’t different," he said.

Several of this weekend’s scheduled college football games have been canceled or postponed due to the coronavirus, including No. 3 Ohio State at Maryland and No. 1 Alabama at LSU.

The Badgers resume their season as Wisconsin’s coronavirus outbreak is worse than ever. On Thursday, the state’s seven-day average for new infections was 6,209 — more than double what it was a month ago.