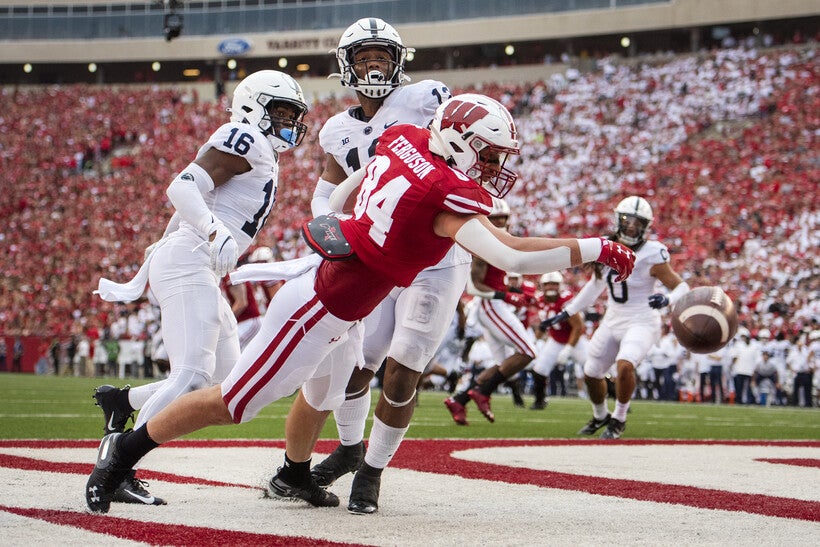 Wisconsin’s Jake Ferguson attempts to make a catch in the end zone Saturday, Sept. 4, 2021, during the Badgers’ 16-10 loss to Penn State at Camp Randall Stadium in Madison, Wis. Angela Major/WPR

The Wisconsin Badgers had their chances to win their season opener against Penn State on Saturday. But they struggled to capitalize during trips to the red zone, and the Nittany Lions beat the Badgers 16-10.

"It's a tough loss," head coach Paul Chryst said after the game. "Like every game, there's going to be things you've got to take away from it."

Despite staying in the game until the final seconds, his team didn't do enough to win, Chryst said. But there's a lot of season ahead of the Badgers, he said.

Wisconsin won the toss and elected to defer. Linebacker Jack Sanborn sacked Nittany Lions quarterback Sean Clifford on third down for a loss of seven yards, and Penn State went three-and-out. Despite 22 yards on three carries for running back Chez Mellusi, Wisconsin’s first drive didn’t last long either. Quarterback Graham Mertz was sacked for a loss of 18 yards and called for intentional grounding. 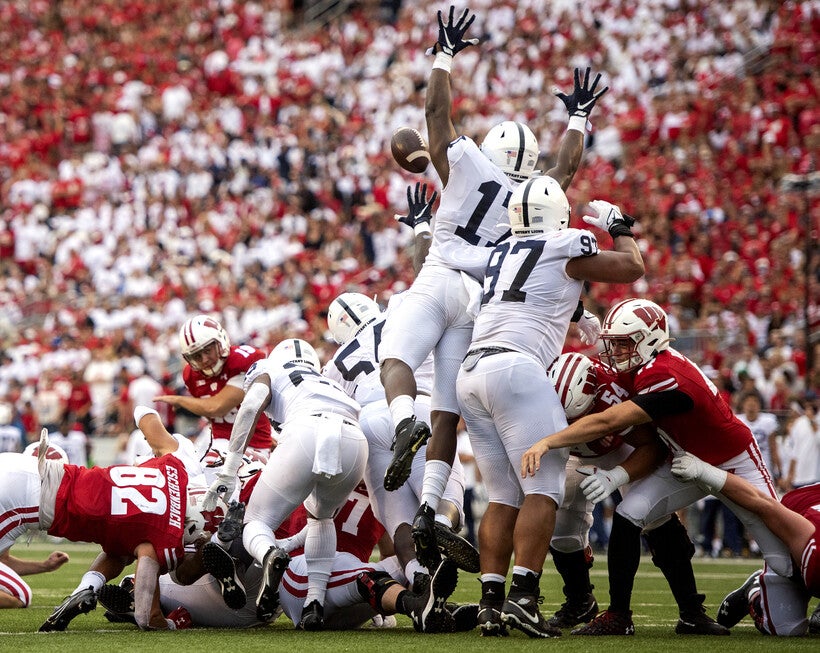 Penn State’s first big play of the game came on its next possession. On third down, Clifford completed a 24-yard pass to wide receiver Parker Washington. The Nittany Lions advanced past midfield but couldn’t capitalize. They turned over the ball on downs.

Sanborn had another tackle for a loss on Penn State’s next drive. The senior was named to the preseason watchlist for the Butkus Award, which goes to the best linebacker in the nation.

On their subsequent punt, the Nittany Lions were called for catch interference, and the Badgers took possession on their own 49. Mertz completed an 8-yard pass to tight end Hayden Rucci, setting up a third-and-1. Fullback John Chenal converted with a short carry.

The Badgers earned a fresh set of downs thanks to an 8-yard pass to tight end Jake Ferguson and a short run from Mellusi. The junior followed it up with a 19-yard carry, taking Wisconsin into the red zone. In the opening moments of the second quarter, the Badgers earned a first-and-goal, but were flagged for a false start. Penn State blocked Wisconsin’s field goal attempt, and the game remained scoreless.

The Nittany Lions struggled to get their offense going in the second quarter, quickly burning through three downs on their next possession. On Wisconsin’s next drive, running back Isaac Guerendo took the ball 24 yards on three consecutive carries. Mertz dove across midfield on a quarterback keeper to give the Badgers a fresh set of downs.

They continued down the field with the help of a 14-yard pass interference call against cornerback Kalen King, who tripped up wideout Kendric Pryor. Mellusi led Wisconsin into the red zone with a 13-yard carry. But Mertz fumbled at Penn State’s 13 yard-line, and the Nittany Lions recovered the ball. They quickly punted, and the game remained scoreless through the half. 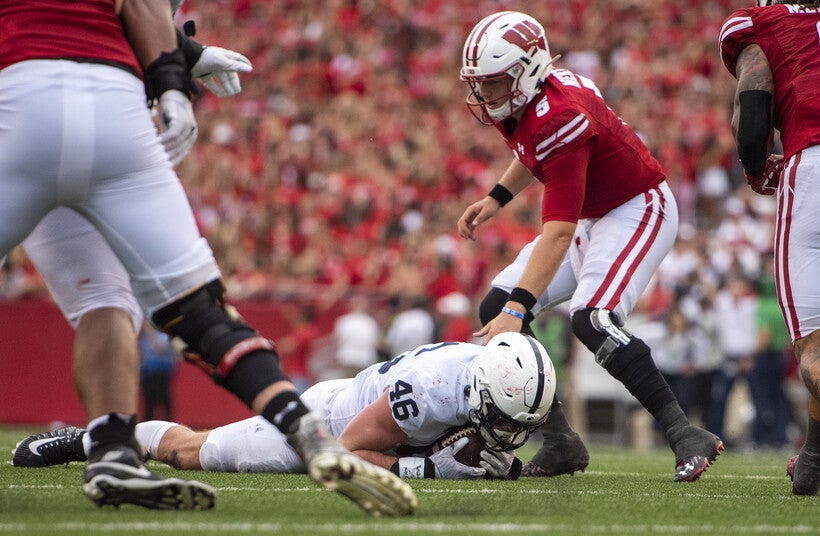 Three minutes into the third quarter, Penn State got on the board, thanks to a 49-yard pass from Clifford to wide receiver Jahan Dotson, capping off a four-play drive to take a 7-point lead.

But Wisconsin quickly answered. Mellusi had a 15-yard carry before Mertz completed two passes for 32 yards to reach Penn State’s 25. A 9-yard run from Pryor got the Badgers within striking distance, and a 10-yard pass to Ferguson gave them first-and-goal. Melussi ran the ball 3-yards into the endzone, and Wisconsin tied the game.

It didn’t take long, however, for Clifford to complete another long pass — this time a 52-yarder to wide receiver KeAndre Lambert-Smith. An interference call on a subsequent pass attempt gave Penn State a first down on Wisconsin’s 13-yard line. Moments later the Nittany Lions missed a field goal attempt.

Both teams went three-and-out on their next possession. But just before the end of the quarter, Wisconsin strung together a good drive, which included a 17-yard pass to wide receiver Danny Davis and an 11-yard carry by Mellusi. Kicker Collin Larsh finished it off with a 43-yard field goal to give the Badgers a 10-7 advantage.

"I thought (Davis) played with great energy," Chryst said. "I thought a lot of guys did. That's what'll get lost in this one." 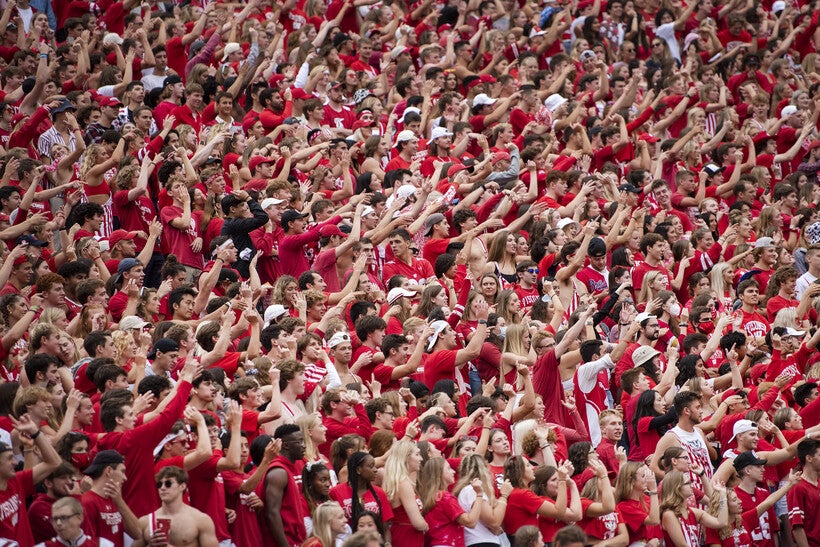 But it didn’t last. Running back Noah Cain opened Penn State’s next dive with a 34-yard carry. Clifford completed a 6-yard pass to Lambert-Smith, and then Cain broke a tackle on the next play to take Penn State to Wisconsin’s 20-yard line. The Badgers managed to hold the Nittany Lions to a field goal, tying the game.

The next drive ended for Wisconsin with a near interception. The Badgers punted with just over 10 minutes remaining in the game. Then Clifford and Dotson connected for another long completion — this time 42-yards. And Cain went on to add a rushing touchdown for the Nittany Lions, giving them a 16-10 lead after Penn State missed the extra point.

Wisconsin put together a series of short run and pass plays to reach Penn State’s 44-yard line. On a third down, Mertz drew a targeting call to extend the Badgers’ drive. Davis made a tricky catch to give Wisconsin first-and-goal. But Mertz fumbled on the next play, pushing the Badgers back from the goal line. With two-and-a-half minutes remaining, Wisconsin went for it on fourth down, and Mertz’ pass was intercepted at the 2-yard-line.

With the ball back, the Nittany Lions ran a minute off the clock. The Badgers got their last shot with 1:07 remaining. They quickly found their way to Penn State territory. Wisconsin had third-and-10 at the 25 with just 20 seconds remaining, when an intentional grounding call on Mertz resulted in a 10-second run off. Mertz threw an interception on the last play of the game, and Penn State won.

After the game, Mertz said his team suffered from "self-inflicted wounds." As an offense, you can't put the ball on the ground, he said. You never want to lose a game, he said, but it was a learning experience. 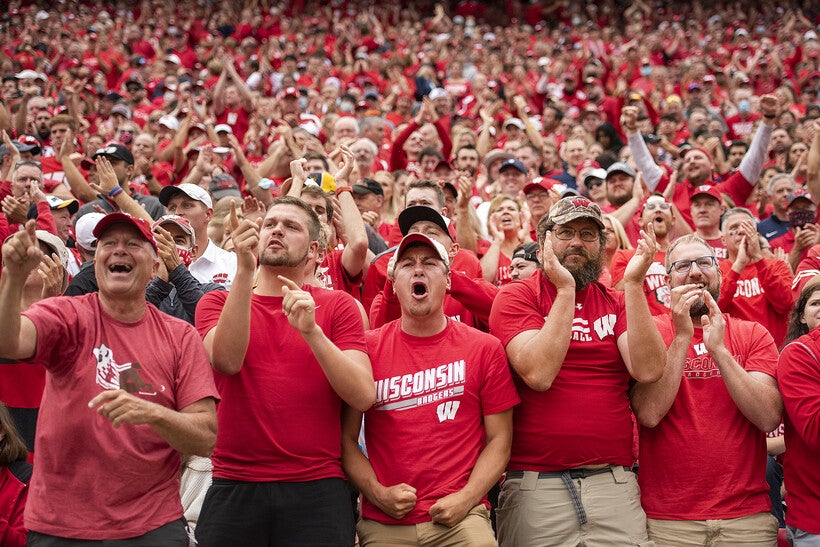 Wisconsin fans react to a sack by Wisconsin’s Nick Herbig in the third quarter of the Badgers’ game against Penn State on Saturday, Sept. 4, 2021, at Camp Randall Stadium in Madison, Wis. Angela Major/WPR

Mellusi finished the game with 121 yards on the ground. There were questions this training camp about who’d start at running back for Wisconsin, with the Clemson transfer earning the role and opening strong.

The scene around Madison was a far cry from a year ago, when Wisconsin opened the season against Illinois at an empty Camp Randall. A few students played cornhole or beer pong in their yards, with police checking to make sure they weren’t hosting large gatherings.

But on Saturday, droves of fans walked through downtown Madison, and there was hardly an empty seat at Camp Randall. Attendance was 76,832. It marked the first time fans attended a UW-Madison home football game since 2019.

The Badgers will host Eastern Michigan next Saturday. 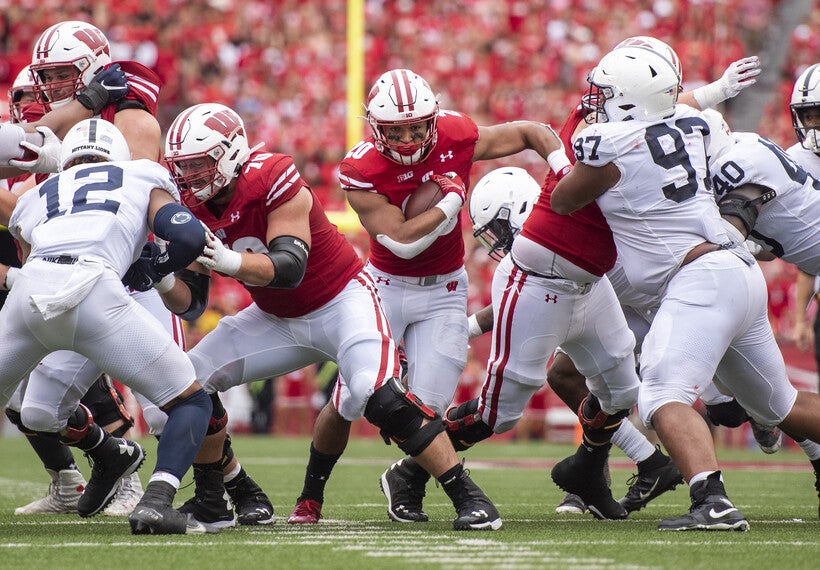