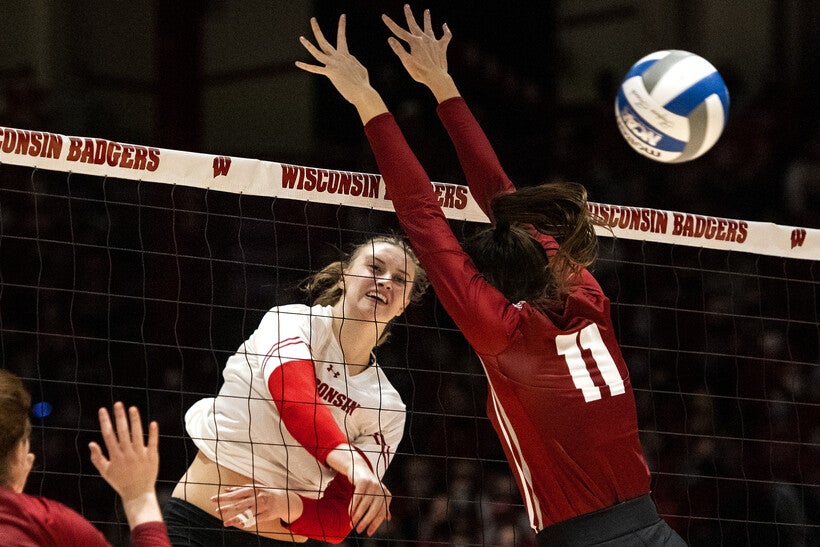 Wisconsin’s Anna Smrek, left, spikes the ball to score a point for the Badgers during their NCAA tournament match against Colgate on Friday, Dec. 3, at the UW Fieldhouse in Madison, Wis. Angela Major/WPR

Badgers host Sweet 16 Thursday: 'It's an unbelievable amount of talent'

There might be more volleyball talent in the state of Wisconsin this week than ever before.

Wisconsin Badgers head coach Kelly Sheffield acknowledged that the UW Fieldhouse has hosted two Final Fours in the past, but this week, UCLA, Minnesota and Baylor are in town for the regional stage of the NCAA tournament. They’ve brought along players of the year from each of their conferences — not to mention Wisconsin’s own slate of top players.

"It’s an unbelievable amount of talent," said Sheffield, who joked this week that he’d sign doctors’ notes for those who miss school or work to attend Thursday’s games.

No. 5 Baylor will take on No. 12 Minnesota at 2 p.m. That match is followed by No. 4 Wisconsin against No. 13 UCLA. The winners of those Sweet 16 matches will face off in the Elite Eight in Madison on Saturday.

Wisconsin, Texas and Nebraska are the only teams that have reached the Sweet 16 each of the last nine years.

"There’s a lot of great programs that aren’t on that list," Sheffield said. "It’s not an easy thing to do. It’s not easy to advance in the tournament." 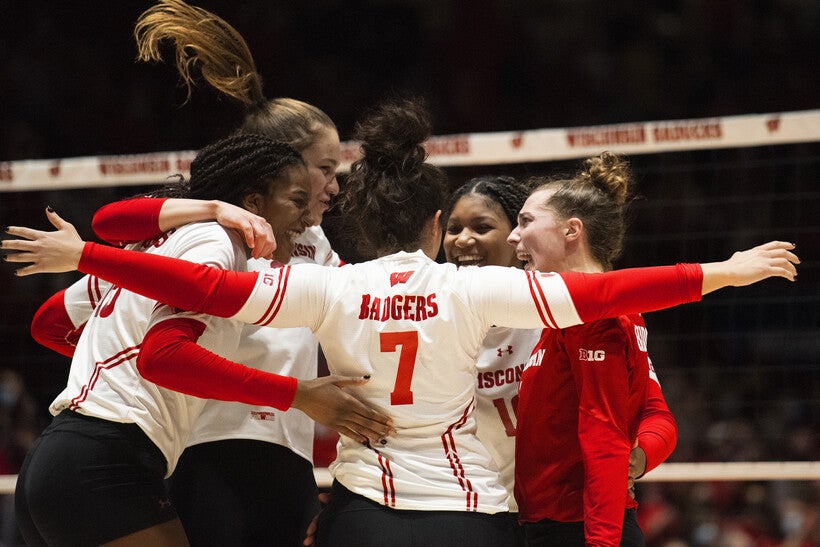 The Wisconsin volleyball team celebrates as the third game against Colgate concludes Friday, Dec. 3, during the NCAA tournament at the UW Fieldhouse in Madison, Wis. Angela Major/WPR

Players need to have talent, remain healthy and stay motivated, he said. Sheffield said Wisconsin is lucky to have some committed leaders, including grad student Dana Rettke, who could become the first player in the history of college sports to be named a first-team All-American five times, Sheffield said. Sydney Hilley, also a grad student, was recently named Big Ten Setter of the Year for the third time in a row.

UCLA is led by Mac May, who became the fourth Bruin in history to record 2,000 career kills. She’s originally from Iowa, and she said she’s looking forward to playing in Wisconsin.

"This is the second time going to the Fieldhouse. It’s exciting (my family) will be able to drive there and get some people who normally wouldn’t be able to see us play since it’s a long trip out here. I’m grateful for us to be able to have that match and go over there," May said. 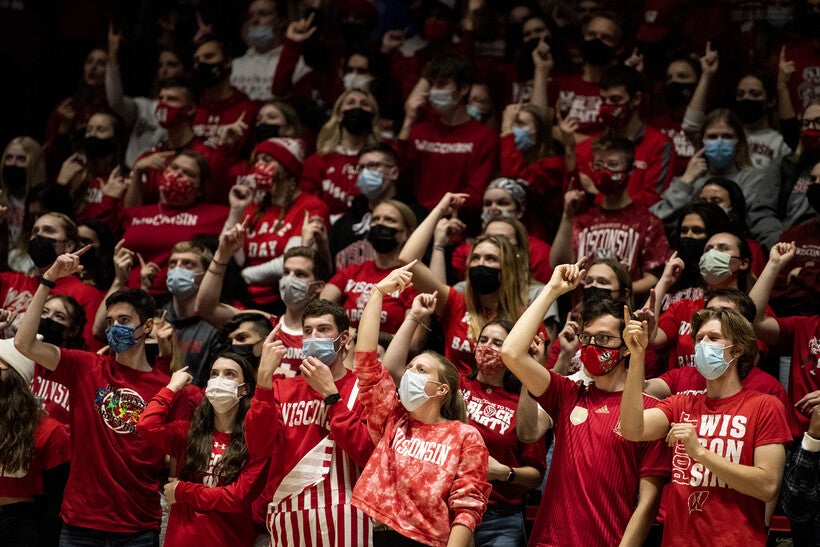 Wisconsin fans cheer on the Badgers volleyball team during the NCAA tournament Friday, Dec. 3, at the UW Fieldhouse in Madison, Wis. Angela Major/WPR

But the UCLA faithful is likely to be seriously outnumbered by Wisconsin fans. The Badgers saw a big turnout for their early-round matches last week.

Wisconsin won its first two contests convincingly, but there have already been some really competitive matches in this year’s tournament, Sheffield said. The fall of defending national champion Kentucky was the biggest surprise of the early rounds, he said.

Despite its success deep in the tournament, Wisconsin has never won a national title in volleyball. The Badgers reached the Final Four last year, and they lost in the 2019 championship match.