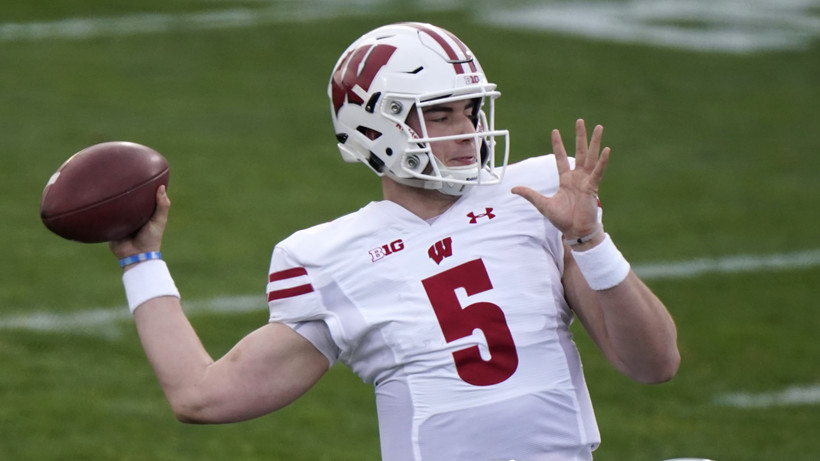 Less than a month after the NCAA ruled college athletes can profit from their names, image and likeness some Badgers Football players have begun to reap the benefits.

On July 1, the NCAA adopted a temporary policy to suspend rules that banned college athletes from getting paid for the use of their names, images and likeness. It was a significant shift but a small part of a larger debate over whether students should be paid to compete in college sporting events.

Three days before the interim NCAA policy went into effect, Badger's Football quarterback Graham Mertz posted a video on twitter that featured a trademarked logo of his initials. On July 1, Mertz tweeted a link to a new merchandise website and a video encouraging fans to peruse his wares.

"I'm excited to announce I'm officially dropping my merchandise website, grahammertzshop.com" said Mertz. " ... I'd love for you guys to check it out and buy some sweet gear."

The website features T-shirts, hoodies and even baby onesies with iterations of his name, logo and illustrations of the young QB in action.

WPR emails seeking interviews with Mertz and members of UW-Madison's athletics department about the NCAA policy change were not returned.

Mertz isn't the only Badgers football player to take advantage of the newfound ability to profit from the rule change. On July 13, Mertz tweeted again to announce that Mission BBQ, which has restaurants in Brookfield, Kenosha, Madison and West Allis, was designated as the official barbecue of the Badgers offensive line.

Mission BBQ tweeted that they were "proud to sponsor" the offensive line, but representatives did not respond to a request for comment from WPR.

The replies to Mertz' merchandising and sponsorship tweets were overwhelmingly supportive and even included some other money-making opportunities for him.

Tom Kulczewski, who owns Real Sportscards, told WPR he's a big fan of Mertz and expects him to eventually compete in the NFL. After buying one of the QB's shirts, he tweeted an offer to host Mertz at his new sportscards shop in Waupun.

"So, the question that came to my head is, 'What is it cost to have a player like Graham Mertz drive 45 minutes to Waupun, Wisconsin to meet with customers, take pictures, sign autographs?'" said Kulczewski.

Kulczewski said he hasn't heard back from Mertz, but Oklahoma Sooners QB Spencer Rattler will do an autograph signing at the end of July. Those signatures will sell for $150 a piece according to Darren Rovell of sports betting website Action Network.

Kulczewski said he believes that price is "absolutely insane."

"But this whole business I work in is crazy," said Kulczewski. "So, who knows?"

In general, Kulczewski said merchandise for college football players like sports cards or signed helmets become much more valuable once those players transition into the NFL. But he said only a small percentage of college athletes go on to professional sports. Kulczweski said that means for some athletes, the current NCAA rule change could be the only opportunity for them to earn extra cash at the college level.

"When I went to college, I didn't have any money and I didn't play sport," said Kulczewski. "But if I could make a thousand dollars a month, it would have completely changed my college experience."

Kulczewski said he thinks the decision to allow college athletes to profit is "a long time coming" and he doesn't think the change will hurt anyone.

Thomas O'Guinn is a professor of marketing and sociology at UW-Madison. He also supports the NCAA rule change, but said he's not sure how it will play out on campuses like his. He said universities have long decided to commercialize college sports like football and basketball. O'Guinn said if universities are benefiting, players — who risk significant injuries on the court or field — should at least be able to make money.

"Whether it starts some sort of slippery slope or not, I don't know," said O'Guinn. "I think it certainly makes it more likely that you're moving to some kind of paid model. But I don't know what that is."

Last fall, UW-Madison Chancellor and member of the NCAA Board of Governors, Rebecca Blank, wrote a letter to members of the U.S. Congress urging federal legislation to create standards governing how college athletes are paid for their name, image and likeness.

Blank noted that several state legislatures were already working on their own rules based on the interim NCAA policy and that risked creating a patchwork of rules that could favor some universities over others when recruiting prospective athletes.

"The guardrails needed around the recruiting process are to protect our student‐athletes," wrote Blank. "It doesn’t take much imagination to envision a car dealership or other business offering to pay a 17‐year old five‐star recruit still in high school to enroll at the local university and not consider other options."

Congress hasn't acted on the request from Blank and the NCAA for national standards. Wisconsin's state Legislature also has not weighed in.

The policy also bans compensation for performance or attendance at UW-Madison and outlines procedures for working with the school on any sponsorships that may include university trademarks.