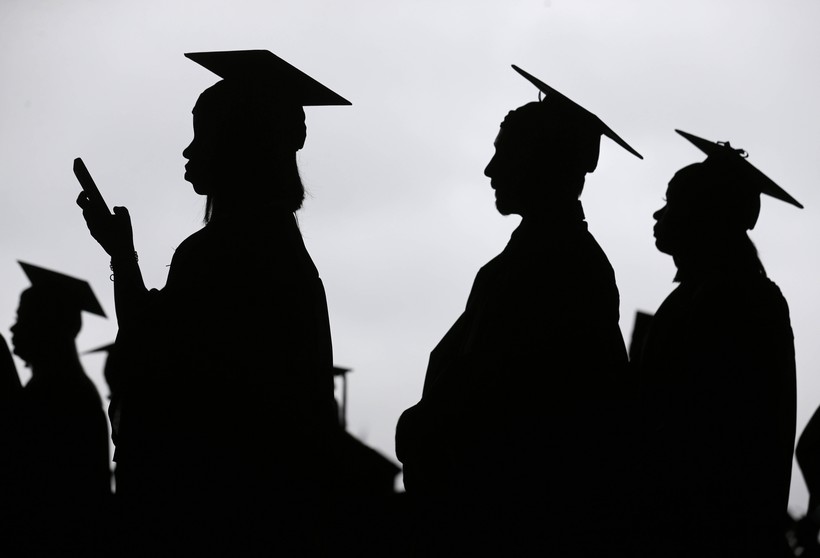 Each May, the University of Wisconsin-Madison's Camp Randall Stadium fills with thousands of soon-to-be graduates and their family and friends, all celebrating the culmination of their college careers. But for the class of 2020, commencement — like so many other aspects of daily life — was anything but normal.

To prevent the spread of the new coronavirus, UW-Madison's ceremony was moved online, forcing graduates and families to watch a virtual commencement in homes scattered around the world. And what comes next for these newly minted professionals is anything but certain. 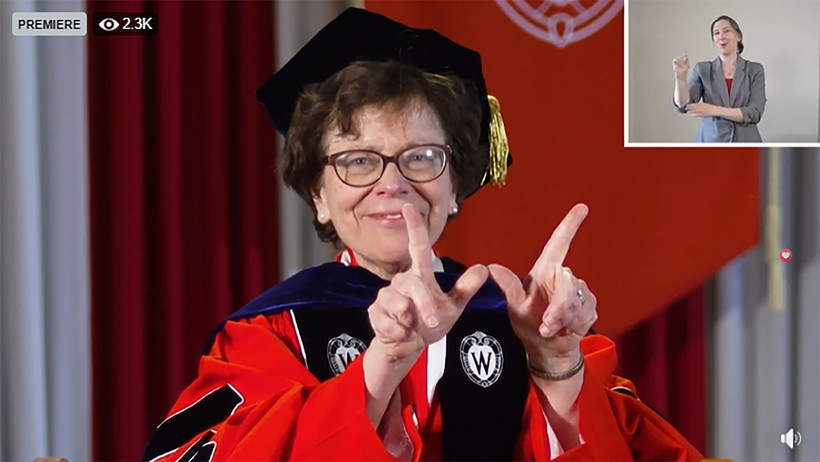 UW-Madison triple-major Laura Downer had big plans this summer. After two years of applying, she said she was offered a "dream internship" with the U.S. State Department in Berlin, Germany.

"And then just a few weeks ago, I got the email," said Downer. "It said, you know, due to COVID-19 travel restrictions we're canceling all these internships and not postponing them to a future date. And because of certain restrictions, I probably won't be able to reapply."

Downer was interested in becoming a foreign service officer and saw the internship as a way to test the waters. She said now there will be pressure to find a "full-time, more sustainable position" elsewhere. Still, Downer doesn't want her privilege to go unnoticed. She said the degrees she and other 2020 graduates have puts them in a better position amid the coming economic recession.

Downer isn't alone in her experience. College graduates across the county are facing one of the most tumultuous job markets in American history. 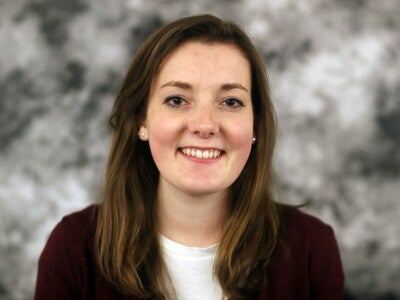 UW-Madison triple-major Laura Downer had big plans this summer. After two years of applying, she said she was offered a "dream internship" with the U.S. State Department in Berlin, Germany. But it was canceled due to COVID-19. Photo courtesy of Laura Downer

For the class of 2020, the COVID-19 pandemic has meant an economy that continues to hemorrhage jobs and a loss of high-stakes internship opportunities. And economists say the effects will likely be long-term, with this year's graduates earning less than their predecessors through the next decade.

Many students, like Downer, had internships and job offers postponed or rescinded as businesses grapple with the health and economic impacts of COVID-19, said Rebekah Paré, an associate dean of UW-Madison's Letters and Science Career initiative.

"We have a situation where students are waiting for further decisions to be made, waiting for a start date," said Paré. "Or now, the worst-case scenario is they had an opportunity, it was taken away, and they are having to rapidly regroup. And as part of that regrouping, we're having to help students really identify who's still hiring."

Paré said jobs in retail and marketing communications have dried up, but her office is seeing new opportunities in technology and software development.

But she added it's particularly difficult for graduates to regroup and reapply now because spring marks the "downside of the recruitment cycle." Typically, she said, companies begin recruiting May graduates as early as September or October of their senior year.

To bolster options for UW-Madison graduates, Paré said her office has contracted with a Chicago-based company called Parker Dewey, which sponsors micro-internships for companies seeking help on individual projects. She said they're also working with alumni to offer career simulations so students can practice for jobs in industries they want to work in.

Abdur Chowdhury, Marquette University professor emeritus of economics, said the short answer is 2020 is a bad time to graduate from college.

"Graduating in a bad economy like this, it has long-lasting economic consequences," said Chowdhury. "And I think that for the next 10 years, the class of 2020 will likely earn less than they would have had they graduated when job opportunities are plentiful."

This month, the Wisconsin Department of Workforce Development reported the state's unemployment rate was 14.1 percent in April compared with 3.1 percent in March.

Aside from increased competition for fewer jobs, Chowdhury said federal and state safety nets like unemployment insurance don't benefit college graduates as well as older workers with more, high-wage work experience. He said some students may choose instead to stay in college and earn higher degrees, which causes them to accumulate more debt that will be harder to repay.

UW-Stout computer and electrical engineering major Jacob Hillebrand considers himself lucky. After completing an internship before social distancing orders were enacted in March, he was offered a job in Shoreview, Minnesota — just north of Minneapolis — by diesel engine manufacturer Cummins.

Hillebrand said he's grateful for the opportunity, though he expects his position could be impacted by the fallout from COVID-19.

"I think Cummins announced that they're doing subtle pay cuts and subtle hour cuts to a lot of their employees just kind of across the board," Hillebrand said. "So, I think I'll be working four and a half days a week instead of five. But beyond that, I think nothing else has changed." 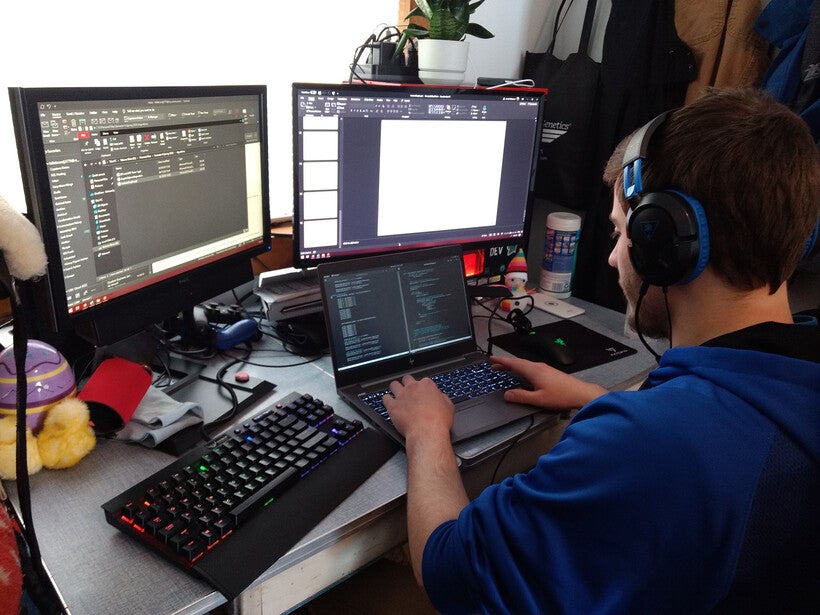 UW-Stout computer and electrical engineering major Jacob Hillebrand works from home in preparation for a job he secured after graduation this May. Photo courtesy of Jacob Hillebrand

UW-Stout Director of Career Services Bryan Barts said he's still seeing manufacturing companies in contact with the university in search of graduates, especially plastics and medical device manufacturers. But those industries that may be deemed less essential, he said, are experiencing challenges.

Boasting a job placement rate of nearly 99 percent, Barts said the campus has a long history of cooperative agreements with the business community.

"But we have seen some of our larger national co-op companies email us and have to either cancel their program entirely or, again, adjust starting dates to make it flexible for students," Barts said. "The overall census is that I think employers realize the impact this will have, but they also are looking for it to be over soon or in a couple of months. And so they're trying to do that kind of futuristic planning without losing any traction."

Earlier this spring, some economists predicted a v-shaped economic recovery — or a sharp economic decline followed by a quick, sustained recovery. Some, like Chowdhury, say it could resemble the Nike Swoosh instead, characterized by an economic surge once things reopen followed by a slower, more gradual recovery. But the full impact and timeline is anyone’s guess. 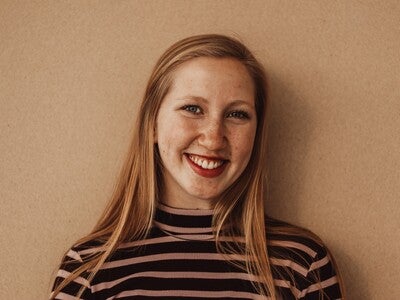 UW-Eau Claire elementary education major Becky Prestley is confident she'll find a teaching job eventually. She said she's already been offered a job in Texas where she student taught before districts sent students home. She said she hopes to teach second grade in Wisconsin, so she's holding off on accepting the Lone-Star state offer. In the meantime, Prestley said it's taking longer to hear back from districts she's applied with.

"I'll submit an application and normally it would be reviewed in one to two weeks," said Prestley. "But my career counselor said, you know, maybe wait two to three. You know, it might take a little longer just because people's priorities are elsewhere."

As stay-at-home orders begin to lift, some businesses are opening back up. Still, the state of Wisconsin's economy is daunting with more than 307,000 weekly unemployment claims reported by the DWD, as of May 16. That's an increase of more than 1,200 percent compared with numbers from the same period last year.