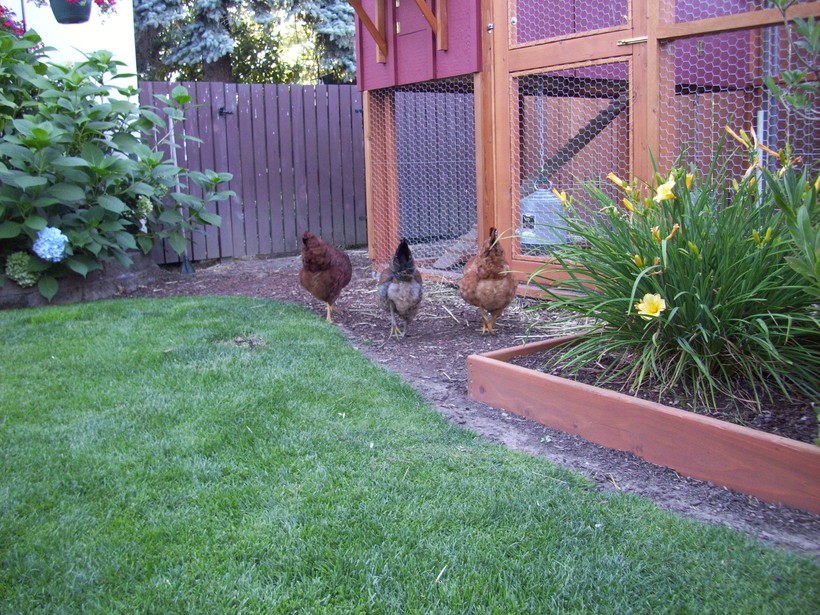 Backyard Chickens Can Be Friends To Gardens

Author Gives Tips On Designing A Garden In The Company Of Hens
By Kate Archer Kent
Share:

Backyard chickens provide wholesome and nutritious eggs, but they also can be a good neighbor to a garden plot, as long as gardeners keep a watchful eye on the shenanigans outside the coop, said Lisa Steele, author of "Gardening With Chickens: Plans and Plants for You and Your Hens."

Well ahead of spring planting, Steele said now is the perfect time in Wisconsin to let chickens roam around the garden where they can scratch in the dirt, eat weeds and bug larvae that may have overwintered.

"They’ll also fertilize for you when they poop. In a week or two, you’ve got a nice garden plot and your chickens did all the work for you in the pre-spring gardening," Steele said, adding that her garden becomes a "no chicken zone" once she's planted seedlings and her produce starts growing.

To get started with backyard chickens, Steele recommends keeping a small flock of about five or six hens that can withstand the Wisconsin winters.

"You’re looking for larger-bodied breeds — Australorp, Buff Orpington or Brahma — girls that have some body fat going on so they can keep themselves warm," Steele said, who raises chickens in Maine.

But chickens don’t need any extra help staying warm in the winter as long as their coop is secure.

"Like other animals, they prepare for winter. They grow in new feathers in the fall. As long as your coop is not drafty, wet, or in the wind, they should be fine," Steele said.

But chickens do need protection from a wide range of predators. Steele prefers to err on the side of caution installing sturdy fencing, like welded wire pipe or chain link.

Chicken keepers can also build a chicken tunnel that allows the flock to run around the yard in a protected system. Steele suggests stretching chicken wire around PVC pipe to build a tunnel around the perimeter of the backyard.

"That way they go where you want them to go, and your chickens are safe from hawks, too," Steele said.

Steele allows her chickens limited access to the delicacies in her garden. She keeps them away from produce that isn't good for them: tomatoes, eggplants, peppers and white potatoes. Like humans, leafy greens and herbs are very nutritious for the flock. Steele observes her chickens a lot, and she thinks they find garden herbs very satisfying.

"They nibble a little basil, and then move on, nibble a little parsley, and then move on. I think it’s because herbs are so incredibly nutrient dense that the chickens are getting what they need by only eating a little bit," Steele said, who dries her leftover herbs of the season and mixes them into the chicken feed during winter months. She said it's an inexpensive way to boost their diet and immune systems.

In the summer months, Steele adds fresh herbs to her nesting boxes — mint, rosemary and thyme — to help keep bugs out of the nests. The added bonus is that it looks attractive.

"I have to say, if you have an Instagram account and you put some herbs in your box with your eggs, you’re going to get a whole lot of views on that picture because people just think it's so beautiful," Steele said, who leads by example on her Instagram page and her Fresh Eggs Daily blog.