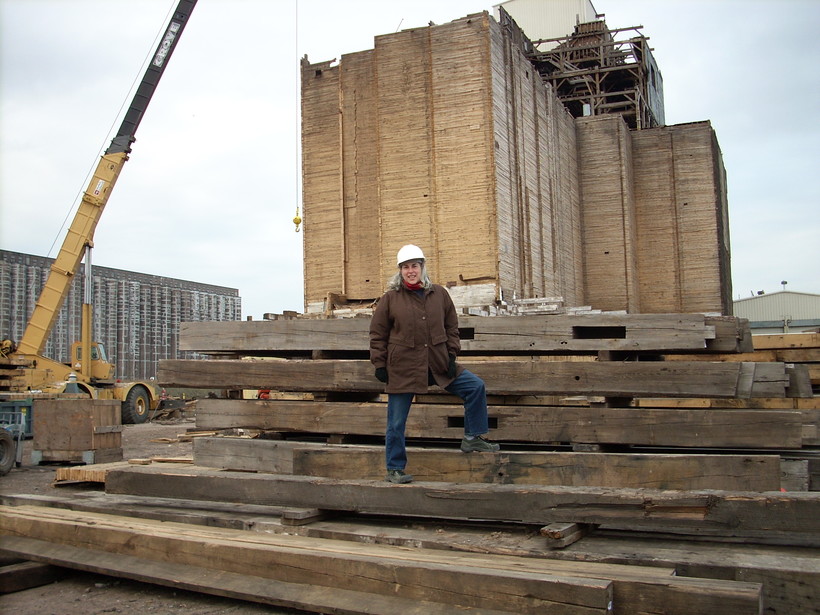 A tough television show will highlight a massive 125-year-old grain elevator in Superior as it's dismantled. The History Channel show "Ax Men" will profile a Wisconsin couple's effort to recycle timber that has been extinct for a century.

The 1887-vintage Globe Elevator on Superior's waterfront was used to store grain for a century before closing in 1988. Wisconsin Woodchuck Company co-owner and "ax woman" Judy Peres now has three buildings, one 15 stories high, the others six stories high: "Each one has the footprint of a football field. They are huge, yes. There's six million board feet of old growth lumber in these elevators."

Peres says the elevators were built from pine that once dominated northern Wisconsin, "which is [now] pretty much extinct. The only way you can get it is if you recycle it from an old building. Because all of those forests - all the old-growth pine forests in this part of the world - were clear-cut in the 1880s."

"Ax Men" programming vice-president Sarah Whalen says it's hard to find these so-called 'urban loggers.' "Truthfully what they're doing is a tremendous feat. And they had to be half-crazy to get into it in the first place. I mean, just pulling down this wood from this massive structure is a tremendous effort. The wood that they got out of it is worth it but it is certainly not without risk."

Peres and her partner have been dissembling the Globe elevator for six years. She says demand started strong, but the recession's been tough. "We're getting a lot more calls. What we're seeing, though, is people who used to build really big homes and projects where cost was no object. That doesn't seem to happen anymore."

Whatever the demand, she says there's enough wood to keep them urban logging for the rest of their lives.