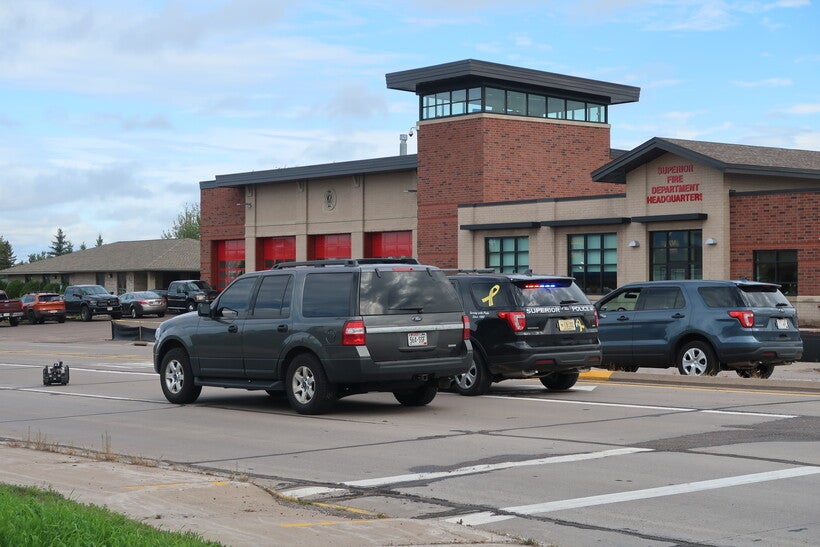 Superior city officials evacuated the city's fire hall and closed off sections of Tower Avenue for hours after receiving a credible bomb threat at the headquarters of the Superior Fire Department on Tuesday morning.

Fire department officials reported a suspicious item on the sidewalk just north of the department headquarters at 9:13 a.m. after being notified by a concerned citizen. A tactical team from the Superior Police Department deployed a remote-controlled robot to examine and photograph the device. Photos confirmed it appeared to be a homemade explosive device.

"This is a pipe-shaped object that's sealed on one end," said Superior Police Chief Nick Alexander.

The approximately 1-foot long pipe prompted an evacuation of the fire hall and a nearby dentist's office, according to Superior Mayor Jim Paine.

"There is no threat that we know of to the surrounding area," said Paine.

By Tuesday afternoon, the device was removed and all of Tower Avenue reopened to traffic.

Despite the fire hall's evacuation, officials were ready to respond to any fire emergency, according to Superior Fire Chief Scott Gordon.

"We have not stopped going on calls," said Gordon.

The Marathon and Oneida County Joint Sheriff's Office Bomb Squad responded, which is several hours drive from Superior. The bomb squad is the closest regional response team in Wisconsin.

Similar bomb threats in recent years have prompted discussions among Duluth and Superior police surrounding the creation of a regional bomb squad that would serve northwestern Wisconsin and northeastern Minnesota.

Alexander said the estimated cost to provide a regional bomb squad would run around $1 million. Yet, Superior's police chief noted the cost of staffing to secure the scene for hours and disruption to the community. The Minnesota Air National Guard has responded to offer assistance during previous bomb threats, but that hasn't been the case for several years.

Agents with the FBI from Duluth and Eau Claire also responded. The device was considered inactive and contained a "grainy" substance. It will be sent to the Wisconsin Crime Lab for testing.

There’s no information yet on who may have placed the device at the fire headquarters. The discovery came as Gordon assumes his new role as the Superior's fire chief on Tuesday.