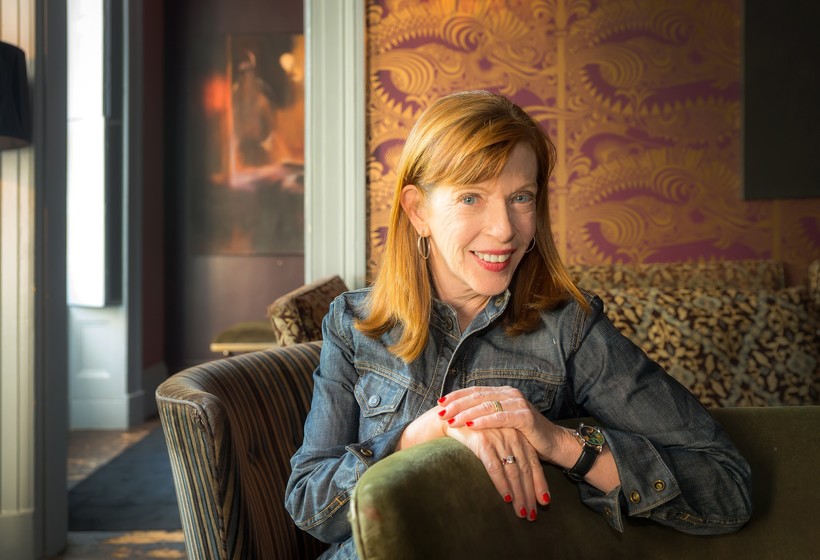 Susan Orlean is an author and a staff writer for The New Yorker. Her latest book, "The Library Book," is an intoxicating mixture of true crime, history, biography and immersion journalism.

"As we were walking through the building, the gentleman giving me the tour pulled a book off the shelf, took a deep whiff of the book," Orlean told WPR's "BETA." "I didn’t really understand what he was doing. And he, after a moment, said, 'You can still smell the smoke in some of them.' I thought he meant that they allowed people to smoke in the library. I really had no clue about anything that would be referring to a fire. And he said, 'No, no, no. From the fire, the big fire.' And I said, 'What fire?' And he said, 'Well, the big fire in 1986 that shut the library down for seven years.'"

Orlean was astonished that she had never heard of the fire. She said that was a big reason why the story appealed to her. The more she learned about it, the more surprised she was that she wasn't familiar with the story of the biggest library fire in American history.

It happened on the morning of April 28, 1986. The library was open and there were about 200 patrons inside along with about 200 staff members.

"When the fire alarm went off, nobody was especially concerned because they had a lot of false alarms," Orlean said. "The building was in bad shape, the fire alarm system was very touchy, so people thought, 'Oh God, here goes another false alarm.' They evacuated the building, the fire department showed up, looked around, didn’t see a fire, couldn’t reset the alarm, thought they better look again and found a little tiny sort of tendril of smoke in the fiction stacks. Very quickly, it exploded into an enormous fire that ended up reaching 2,500 degrees. It burned for seven-and-a-half hours — just fierce, fierce fire that was burning in the stacks of the library, which are almost like big chimneys that are lined with books."

Orlean said the fire became so hot firefighters told her, "that the flame became colorless. It wasn’t red, it wasn’t orange, it wasn’t blue. It was just clear. And they said it was really terrifying."

Four-hundred-thousand books were totally destroyed and 700,000 were badly damaged. But the building remained basically intact.

"It was really devastating. The librarians were traumatized," Orlean said. "Librarians work diligently to build their collections. It’s not just that they click on the best-seller list and order those books. They’re developing collections that they feel are really interesting and comprehensive and relevant to their patrons. For them, seeing their work up in smoke literally because of the fact that they developed these collections, the fact that they had no idea what was going to happen, if the library would ever reopen, their concern about what was going to happen to their patrons, the people who use the library."

Investigators began to suspect arson and the prime suspect was a young man named Harry Peak.

Peak grew up outside Los Angeles. With visions of movie stardom, he moved to the city and began working odd jobs, all the time imagining it was only a matter of time until he became a star. He even told his family that he was becoming friends with celebrities like Burt Reynolds and Cher.

"The thing about him is that he lied about everything but never in a way to harm anyone," Orlean said. "It was innocuous, silly lies. But he was a liar. He may be the most unreliable narrator. I’ve never heard of an instance where someone provided so many different alibis."

At some point during the writing of her book, Orlean realized she'd never seen a book burned and so she had no idea how to describe it. So she decided to burn a book.

"I was very curious about our relationship to books and libraries and why they feel almost sacred. And why there is such a taboo about not only burning a book, even throwing a book away. I realized that I couldn’t remember ever throwing a book away, including books that were literally falling apart. I just found it so uncomfortable as if it were a living thing," she said.

"One day, my husband came home and he was just grinning ear to ear. And he handed me a copy of 'Fahrenheit 451' by Ray Bradbury and said, 'Here you go.' And I really did feel it was the perfect book to burn and Ray Bradbury would have appreciated it," Orlean said.

So how did burning a copy of Ray Bradbury's classic novel go?

"Well, I was very nervous because I was in L.A. and I thought burning anything in L.A. is a very risky undertaking. So I went to my backyard and I took an aluminum cookie sheet, which I thought would be a safe kind of base to burn the book on. I had my husband come out with me with a bunch of buckets of water. I was really nervous," Orlean said. "I finally lit a match and held it to the corner of the cover. And it was slow in the beginning. It was just a little trickle of smoke and a little edge of orange. And then suddenly the book literally was gone. It was almost as if it had exploded, it burned so fast."

Orlean said her personal experience with book burning gave her a better understanding of how the library fire became so fierce.

"Books are perfect fuel and particularly, when they’re in what is essentially a chimney," she said.