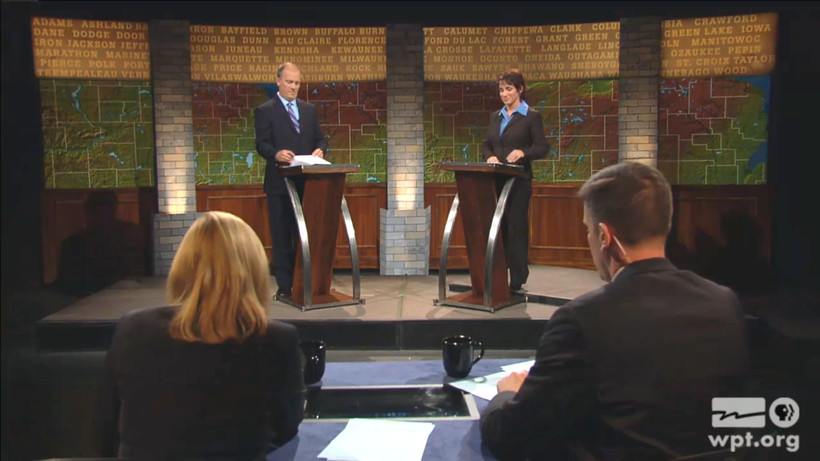 Attorney General Debate Focuses On How, When Candidates Would Defend Laws

Republican Brad Schimel and Democrat Susan Happ met in Madison on Friday night in a televised debate that largely focused on how and when the candidates would defend state laws.

The two largely reiterated the stances that have come up time and time again throughout the campaign: Schimel, Waukesha County's district attorney, said he’d defend any given state law — “even the ones I find distasteful” — while Happ, Jefferson County's district attorney, declared that attorneys general “aren’t robots” and that they can refuse to defend laws they believe aren’t federally constitutional.

At one point, Happ observed that Schimel has reneged on whether he’d defend the state’s domestic partnership registry, and also brought up an interview in which he said that he would defend an interracial marriage ban in Wisconsin if one existed. Schimel directly responded to the latter example, saying that the hypothetical of the interracial marriage ban was “absurd,” and that he’d merely been trying to demonstrate his commitment to defending state law.

In addition to reiterating stances on defending state laws, the candidates hit other previously established marks by both declaring their top priority as attorney general to be addressing the state’s growing heroin problem. They also both revisited their respective positions on how to address gun violence: Both candidates said they support the Second Amendment, but Happ said she’d support universal background checks while Schimel said that “we need to enforce the laws we have” and not introduce new ones.

The candidates also differed in how they responded to a question on whether they’d defend the state election agency's interpretations of a campaign finance law at the heart of a now-stalled John Doe investigation. Whereas Happ said she would, Schimel said he would not do so entirely, and that he disagreed with some of the Government Accountability Board’s interpretations of campaign finance law.

Though there were some clashes, the debate also struck a civil tone for much of the evening — a remarkable achievement, given the abundance of negative statements and advertisements that have circulated throughout the campaign. The candidates even remarked upon the forum’s civility before their closing statements.

“I think you anticipated things getting different than how they got tonight,” Schimel told the moderators.

Part of the benign tone may have stemmed from the debate’s novel formatting. For example, the second question of the night asked each of the candidates if they’d be able to “look (the other) in the eye and tell them they are soft on crime,” as has been mutually alleged in political ads. Happ responded with an explicit “no” and said that she actually “would give him a good grade” as a prosecutor. Schimel did not directly respond to the  — nor did he look Happ in the eye to tell her she was soft on crime. Instead, he lamented the attacks that have been made throughout the campaign, which he attributed to “outside groups.”

Later, the two were asked another if they would want any remark made that night to be retracted. The two both answered in the negative, again with Happ commending Schimel’s record as a prosecutor and Schimel decrying the attacks of outside groups.

The two did, however, clash on other fronts. Schimel emphasized that the two candidates were “very different,” pointing to experience as an example: He has had 24 years of experience as a prosecutor, whereas she has had six. Happ retorted by saying that they have had near-equal tenures as county district attorneys.

Schimel also took issue with Happ’s remark that he was a politician who had been “handpicked” to become Waukesha County district attorney. He stressed that he’d been elected, and was anything but handpicked.

The two also aimed to score points at the other’s expense during another novel part of the debate, in which the candidates were given an opportunity to ask the other a question. Schimel asked Happ what she’s done to help people outside of Jefferson County, where she serves as district attorney. Happ did not give examples of any such work, instead saying that the work she’s done in Jefferson County has an impact on people all around the state.

Happ, in turn, asked Schimel for clarification on his stance on abortion, given the revelation that Schimel signed off on a legal paper outlining a long-term plan for making abortion illegal in Wisconsin, though he’s said Roe v. Wade is “the law of the land.” Schimel, in response, gave a passionate response on his anti-abortion views, and affirmed that he believes life “begins at conception.” The response reflected a recurring theme in the debate: Schimel underscoring his social conservatism, and Happ speaking out on reproductive rights and women’s health.

Neither of the controversies regarding how the candidates have handled sexual assault cases came up during the debate.

The two candidates will face off in another debate next Wednesday.

You can read WPR's live blog of the debate below:


Wisconsin Public Radio, © Copyright 2023, Board of Regents of the University of Wisconsin System and Wisconsin Educational Communications Board.