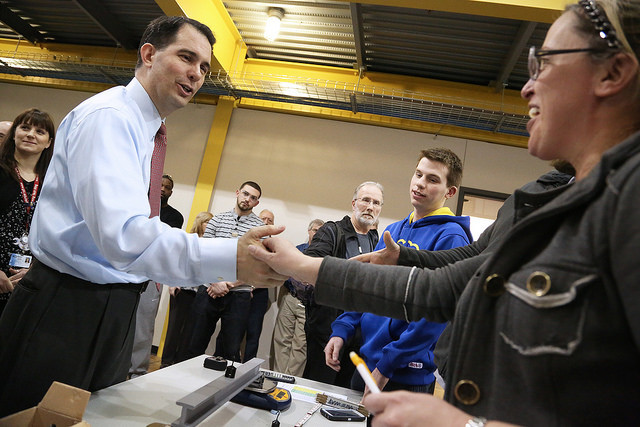 In His Book, Walker Called Out Obama For Describing Mitt Romney As 'Outsourcer In Chief'
By Shawn Johnson
Share:

While Gov. Scott Walker says he's attacking Democrat Mary Burke's record at Trek Bicycle Corp. to expose her hypocrisy, he has also said that he “deplored” a similar line of attack used against Mitt Romney by President Barack Obama.

Walker began running ads last week attacking Burke for making money off Trek when the company was outsourcing jobs. Walker told Republican supporters in Madison that it was relevant because Burke had based her whole campaign on her private-sector experience.

“We're not attacking that company,” he said. “We just think the voters need to know the full story.”

Walker, however, has criticized Obama for using a similar line of attack against Romney during the 2012 presidential election. Obama often blasted his Republican opponent for the time he spent running the private equity Bain Capital. At one point, he called Romney the “outsourcer in chief.”

In his autobiography, “Unintimidated,” Walker wrote: “I deplore the kind of character assassination the Obama camp used against Mitt Romney.”

Walker was recently asked by a reporter for the Wisconsin State Journal what made his attacks against Mary Burke any different than the president's.

“(They’re) fundamentally different. Mitt Romney did not run his campaign on the basis of arguing his experience in the business world was a reason to vote for him,” Walker said. “If he had, then I think it would be fair game to say then you need to look at all of his experience.”

Romney, in fact, did make that case throughout his campaign, such as when he launched his presidential exploratory committee and talked in a video about his experience in the private sector.

“They just don't know how jobs are created in the private sector. That's where I spent my entire career,” he said. “In 1985, I helped found a company. At first we had 10 employees. Today, there are hundreds.”

In other ads, Romney said having run a company would help him understand the economy.

Others have noted the similarities between Walker's attacks in 2014 and Obama's in 2012. The Wall Street Journal recently posted a blog with the headline “Team Walker Channels Team Obama.”