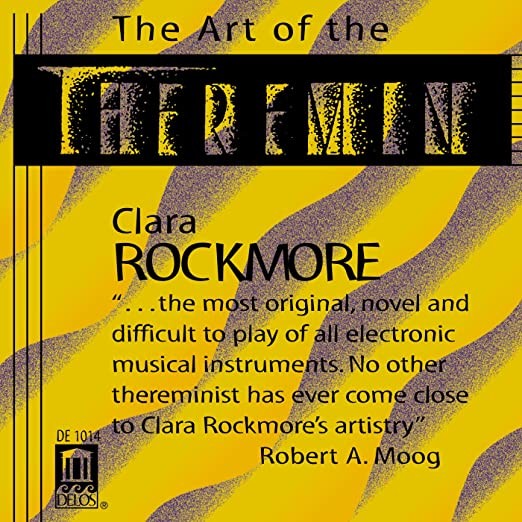 The Art of the Theremin - Risk and Reward

Say the name "theremin".  If you're old enough there might be a good chance it will conjure up eerie memories of movie soundtracks from horror or sci-fi movies, like 1951’s “The Day The Earth Stood Still.”

Clara Reisenberg Rockmore (9 March 1911 – 10 May 1998) was a classical violin prodigy and performer of the theremin.

I've added Rockmore's two albums to my library: "Lost Theremin Album", Bridge Records, 2006, and "The Art of the Theremin", Delos, 1992. The Art of the Theremin is the first official album by theremin virtuoso Clara Rockmore, and the only one released in her lifetime. It was produced by Robert Moog and his first wife, Shirleigh Moog, and was released as an LP in 1977 by Delos International.

Here's what Delos Records says about "The Art of the Theremin" release: "In 1927, two remarkable people arrived in the United States after lengthy and successful tours of Europe: Lev Sergeivitch Termen (anglicized to Leon Theremin) and Clara Rockmore (whose maiden name was Clara Reisenberg). Theremin was a young Russian physicist who was demonstrating a new musical instrument that he invented. The instrument was played by the motion of the musician's hands in the space surrounding the instrument. Clara Rockmore, a professional violinist from the age of 9, became aware of the musical potential of Theremin's invention. She spent several years collaborating with Theremin during which time he developed his invention into a sensitive, wide-range musical instrument. Clara subsequently embarked on a performance career that encompassed well over a hundred concerts, including appearances with major symphony orchestras, and set the definitive standard for theremin performance technique.

The player called a "thereminist" takes a standing position in front of the instrument and moves their hands in the general proximity of two attached metal antennas. The distance from one antenna determines frequency or pitch, and the distance from the other antenna controls amplitude or volume. The theremin uses what is termed "the heterodyne principle" as a means of generating an audio signal.  The heterodyne or beat receiver uses an attached oscillator that produces a radio signal adjusted so that it is close in frequency to the incoming signal being received. Once the two signals are fused or aligned, a "beat" frequency equal to the difference between the two frequencies is produced.

"...the most original, novel and difficult to play of all electronic musical instruments. No other thereminist has ever come close to Clara Rockmore's artistry." -- Robert A. Moog, an American engineer and pioneer of electronic music. He was the founder of Moog Music and the inventor of the first commercial synthesizer, the "Moog (pronounced with a long "o" as in rogue) synthesizer" that debuted in 1964.

"Although Clara Rockmore is universally acclaimed as one of the best musicians of her era, very few of her performances were ever recorded. An aspiring violinist, she took up the strange and wonderful Theremin when physical problems forced her to give up the violin. She invented a method for playing the radical new instrument, and her classical concerts gave the instrument respectability. In keeping with her style, all the material on this CD is classical in nature, often somber or serious in tone. And while these recordings were made long after her heyday, the performances are still top rate examples of Theremin playing and her discipline and passion for the material is clearly undiminished by time. Her few earlier recordings had long been an inspiration to several generations of Thereminists. This set of recordings enlarges the available corpus of her work tremendously. Let us hope it inspires as many new musicians as the first round!"

It is said that playing the theremin is highly addictive. There is a high risk of personal injury from disgruntled audiences if played poorly, and there is risk of paranoia. And finally, thereminists constantly fret that they've left their theremin on when going out.

A celebration of the one-hundred year anniversary of theremin - https://www.wbur.org/artery/2019/10/04/theremin-boston-modern-orchestra-sirens