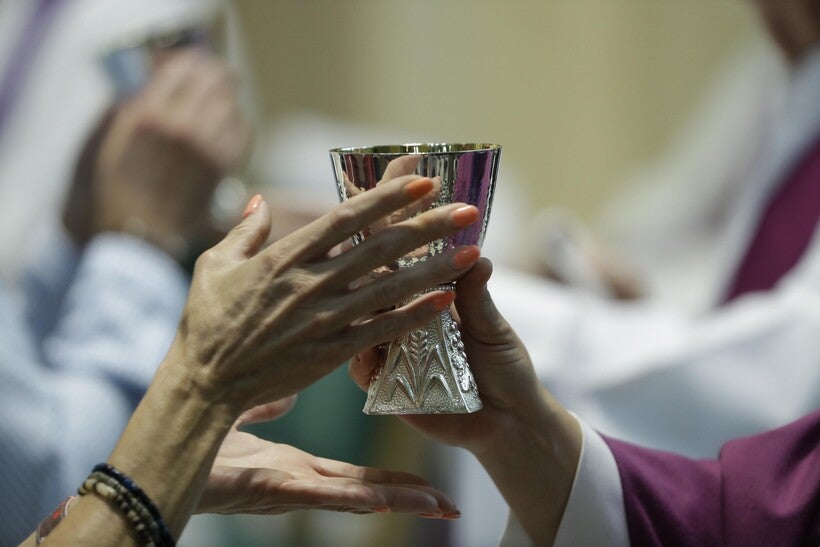 In trying to prevent the spread of the COVID-19, area churches and synagogues are encouraging their members to refrain from sharing communion and greeting fellow parishioners by shaking hands.

The Archdiocese of Milwaukee sent a letter to 193 parishes located in 10 southern Wisconsin counties Tuesday with suggestions on how to handle traditional pastoral practices as the virus spreads.

Those suggestions included reminding ministers to properly wash their hands before mass and to use an alcohol-based antibacterial solution before and after giving holy communion. The archdiocese also recommends not having physical contact while distributing communion wafers or using the communal cup.

"We’re concerned with the physical and spiritual health of over 500,000 Catholics," said Amy Grau, a spokesperson for the archdiocese. "So we’re going to try to give as many precautions as we can, depending on where this goes within the Milwaukee and southeastern Wisconsin area."

On Thursday, Milwaukee Health Department officials said a COVID-19 outbreak is imminent for the city. Health officials don’t know how many people could be affected or when the virus could arrive.

The one confirmed case in Wisconsin was someone who returned to Dane County from China. That person is out of isolation and fully recovered, according to state health officials.

As of Friday, tests on 12 other individuals were still pending, according to the state Department of Health Services.

Nationwide, at least 14 people have died from the new coronavirus and there are now confirmed cases in 22 states, according to NPR.

The Wisconsin Conference of the United Methodist Church (UMC) posted instructions on its website Friday, Feb. 27 for its member churches. The instructions are similar to what was sent by the archdiocese.

Bishop Hee Soo Jung, who is based in Sun Prairie, said in a statement the United Methodist churches should serve as a Christian witness of "care, calm and non-anxious presence" as news of COVID-19 is released.

Sue D'Alessio, director of connectional ministries, with the Wisconsin Conference of UMC, said area churches don't want to get overly anxious, but want to protect its parishioners.

D'Alessio said the United Methodist Church is looking ahead to summer, when camping ministries begin. The group also has an international conference planned in Minneapolis in May and a statewide conference planned June 5 in Green Bay where a small group from South Korea is expected to attend.

"Right now we're not being reactive, but just as prepared as we can be," D'Alessio said. "If there are any issues June 5, then they (the group from South Korea) won't get visas. And we are busy doing other things, like helping out with the recent tornado in Nashville."

As the Jewish community prepares to celebrate Purim on Monday, Rabbi Hannah Wallick, vice president of outreach at the Milwaukee Jewish Federation, said many people are questioning if they should cancel weekend party plans.

"Right now the situation is being monitored day-by-day," Wallick said.

There are also life cycle events, including bris ceremonies, weddings and funerals that will have to be taken into account, Wallick said.

"Here at federation we’re trying to model social distancing, which is really hard, but you could go to a funeral and shake hands and kiss like 100 people by the time you’ve left," Wallick said. "We’re really trying to say, 'Look, I know it feels tough, but you’re going to have to love people from the inside.'"