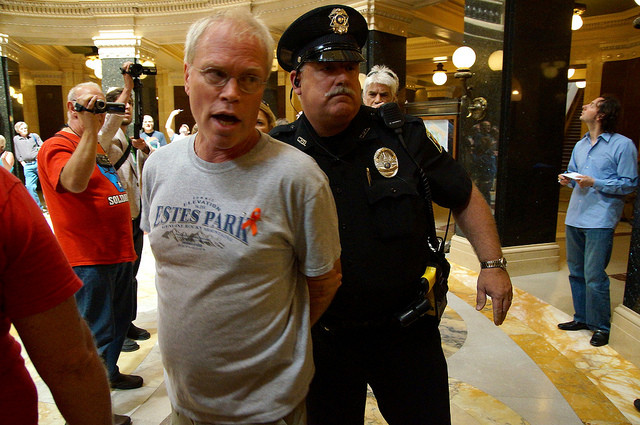 Capitol Police arrest a protester during a Solidarity Sing-Along in 2013. Photo: OLB (CC-BY-NC-SA).

State Capitol Police Made Hundreds Of Arrests In 2013 During Series Of Sing-Alongs
By Gilman Halsted
Share:

A Wisconsin appeals court ruled on Thursday morning that a state requirement for singers in the state Capitol to obtain a permit was unconstitutional.

The ruling by Judge JoAnne Kloppenburg of the 4th District Court of Appeals appears to be the last word on the matter, which became a hot-button issue during the summer of 2013 when Capitol Police arrested hundreds of protesters for singing in the Capitol rotunda without a permit.

Protester Michael Krute brought the legal challenge after he was ticketed for singing in the rotunda in July of 2013. Crute argued the regulations violated his free speech rights. A Madison judge tossed out his ticket in February. Kloppenburg upheld that decision on Thursday, ruling that the regulations hadn’t been narrowly written to further a significant state interest.

Jeff Scott Olson, Krute's attorney, said the ruling means hundreds of other citations that have been hold for more than a year will likely be dismissed.

“I am very gratified for the judges of the circuit court of Dane County, who now don't have to conduct several hundred individual trials in these cases,” said Olson.

The rule requiring a permit  was changed after a legal challenge by the American Civil Liberties Union in the fall of 2013. Now protesters can simply inform the Capitol Police when they plan to sing in the rotunda.