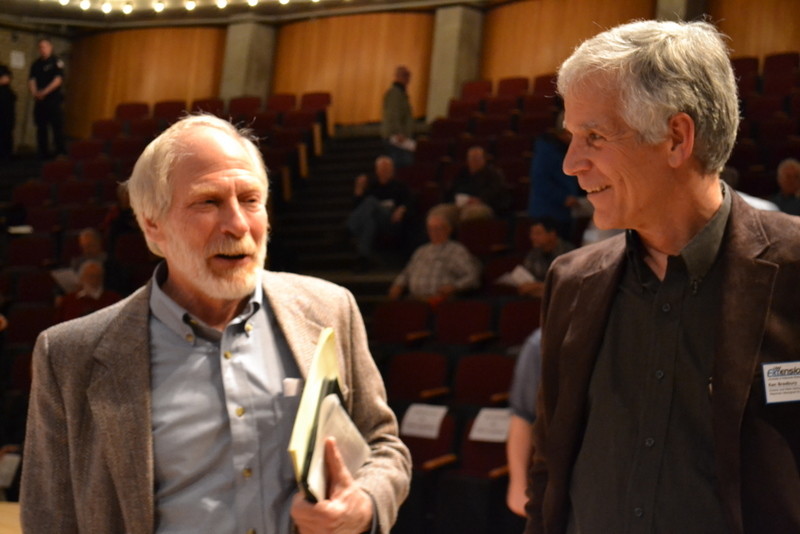 The key findings of a new study confirm the conclusions of earlier research: High-capacity wells are a factor in the drying up of a central Wisconsin trout stream, but finding a solution is harder than identifying the problem.

Nearly 350 people packed the theater at the University of Wisconsin-Stevens Point, more than one might expect for the unveiling of a scientific study.

The central sands region of Wisconsin is made up of farmland and forests, trout streams and lakes.

At the meeting, Dan Helsel, natural resource manager for the Wisconsin Department of Natural Resources, pointed to a graph that showed the increasing number of high-capacity wells in the central sands region from 120 in the 1960s to more than 2,800 today.

"This is a real tough balance for the state, and it's not an easy problem to solve or we would have solved it a long time ago," Helsel said.

The high-capacity wells are vital for irrigating farm fields. But state geologist Ken Bradbury, one of the study’s lead researchers, said those wells are implicated in the drying up of the Little Plover River, a class 1 trout stream.

"There was a lot of controversy and disagreement about the cause, a lot of fingerpointing," he said.

Bradbury’s computer model shows that the closer a well is to the river, the greater the impact, and that even if you turn off one of the wells, it will take several weeks for the river to recover.  Bradbury isn’t making recommendations, but he thinks there's a path forward.

"It will take a reduction in water use," said Bradbury. "Now that can be done by fewer wells, or moving wells to different places, or perhaps even different crops."

For University of Wisconsin-Extension hydrologist George Kraft, Bradbury’s findings are a vindication of more than ten years of his own research.

"The stuff that I've done in the last decade since the Little Plover first dried up has been confirmed," Kraft said.

The river first dried up in 2005. Sections of it have been reduced to a trickle several times since then. Kraft said it’s a sad fate for one of Wisconsin's great trout streams.

"The fishery there was so productive that conservation department staff at the time used it to understand why streams are so productive for trout," said Kraft. (It was) "a very highly prized water body."

But the reports of the death of the Little Plover have been greatly exaggerated, according to Tamas Houlihan, executive director of the Wisconsin Potato and Vegetable Growers.

"I walked the Little Plover on Tuesday, and it's flowing tremendously," he said. "There are trout in it. I don't think we need to shut off wells."

Houlihan’s organization represents the farmers who use the water.

"We have a responsibility to use that water and use it wisely.  We are growing healthy vegetables for a hungry world," he said.

Houlihan and Kraft made their comments on a Wisconsin Public Radio talk show, which also included two local state representatives. State Rep. Scott Krug, R-Nekoosa, questions whether the DNR needs to assess the cumulative effect of high capacity wells everywhere in the state, or only in places with groundwater problems.

State Rep. Katrina Shankland, D-Stevens Point, said there should be one policy for everyone.

The program attracts phone calls from homeowners in another part of the central sands, the Town of Saratoga, who worry about the impact of a planned mega dairy farm on their groundwater.  Rhonda Carrell owns a salon.

"My business relies on water," Carrell said. "If I don't have clean and plentiful water, I'm out of business."

"These farmers live on their land," Houlihan said. "They raise their families on their land. They want what's best for the environment."

"It's 11 years ago since the Little Plover first dried up. It's time to get around to it," Kraft said.

The study was commissioned by the DNR and coauthored by Michael Fienen of the U.S. Geological Survey. It will be released in its entirety later this year.