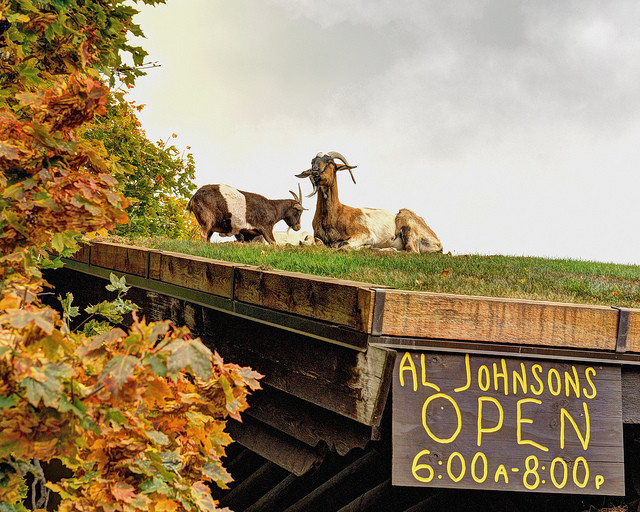 The goats of Door County are ready to make their way back onto the roof of Al Johnson’s Swedish Restaurant.

The goats will make their first appearance this Saturday during the sixth annual Roofing of the Goats Parade in Sister Bay. They’ll start the parade at the corner of Mill Road and Highway 42, then make their way down the road to Al Johnson’s Swedish restaurant where they are led up the green sod roof for all the goat watchers to see.

Al Johnson’s goats live in a barn about a mile from the restaurant and every morning after their debut they are loaded into the "goat truck" and spend the day on the roof, unless it’s raining or too hot, said Lars Johnson, co-owner of Al Johnson’s Swedish Restaurant.

"They really have the best of both worlds," he said. "Most farm animals never leave their pastures their entire lifetime."

While it’s only the sixth parade, goats on the roof has been a common sight for much longer than that.

In 1973, after a trip to Scandinavia, Johnson’s parents renovated the restaurant and built a beer garden using logs brought back from Norway. The renovation included a sod roof, which a friend of Johnson’s dad saw as an opportunity to pull a practical joke.

"He would always show up with an animal," Johnson said. "That particular day he decided to put a billy goat on the top of the sign, which was the very first goat that appeared on a roof in Sister Bay."

What started as just a couple of goats in the parade has added up to at least 50 participating goats. Participants are encouraged to wear goat costumes, Viking hats and goatees. Johnson says all goats are welcome, as long as they behave themselves.

Already a popular Wisconsin destination, the unique tradition has brought people from all over the state, he said. But they do ask that you leave your dogs at home for this particular event.

"It’s really turned into a Door County event, not just a Sister Bay event," Johnsons said. "People have been contacting us for many months trying to make plans, people plan their vacations around this weekend."

The weekend also includes the third annual Goat Fest following the parade at Stabbur Beer Garden, next door to the restaurant.

"We’ll have live bands, lots of arts and crafts for kids and a pancake eating contest, so it will be a really fun day for families to have a good time in downtown Sister Bay," Johnson said.