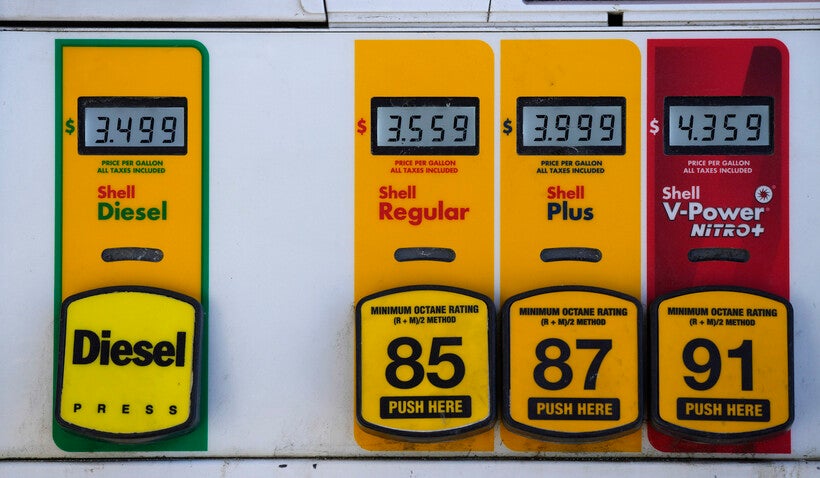 The per-gallon prices are illuminated above the various grades of gasoline available at a Shell station Friday, Nov. 5, 2021, in southeast Denver. David Zalubowski/AP Photo

Many scrapped holiday travel plans in 2020 because of the coronavirus pandemic. This year, rising gas prices are giving some second thoughts.

Hotel groups and automotive associations are not expecting travel to return to pre-pandemic levels just yet, and a fuel industry analyst says gas prices are likely to remain elevated for the next several months.

"Of course, there are wild cards," said GasBuddy senior petroleum analyst Patrick De Haan. "If we get a colder than expected winter, that could boost oil demand, and keep in mind OPEC (Organization of the Petroleum Exporting Countries) is increasing production every month, raising production about 4,000 a day. So that’s some good news."

Still, the American Automobile Association predicts nearly 1 million Wisconsinites will hit the road for Thanksgiving, which is only 8 percent lower than pre-pandemic levels.

The American Hotel and Lodging Association isn't nearly as optimistic. A survey indicated 61 percent of Americans were unlikely to travel for Thanksgiving.

There is still lingering fear of COVID-19, said Chip Rogers, CEO and president of the American Hotel and Lodging Association. Cases have increased recently in Wisconsin and other states. However, Rogers said he believes that is less of a concern than the cost of filling up one's gas tank.

"I think the larger problem we’re seeing now is a seven-year high for gas prices," Rogers said. "We have seen well before the pandemic gas prices are a pretty good indicator as to whether people are going to get on the road for the holidays. And right now, gas prices are very high."

Gas prices have gone up. But they aren't as high as they were in real terms as in 2008 or 2014, points out Menzie Chinn, an economist and University of Wisconsin-Madison professor of public affairs. In a blog he co-writes with energy expert James Hamilton at University of California, San Diego they note the price of a gallon of gasoline now is about 60 percent of the inflation adjusted price in 2008.

"People forget how expensive things were in the distant past," Chinn said. "On the other hand, it has been sort of a whiplash on the rate of change."

The price at the pump was very low before it quickly jumped across the nation.

According to GasBuddy, the average regular gas price per gallon ranged from $3.12 in Milwaukee to $3.00 in Appleton on Friday.

The hotel industry, which Rogers said has lost 50 percent of its revenue the last two years when the pandemic curtailed leisure and business travel, is hoping gas prices drop along with COVID-19 infections. This summer, when new infections plummeted, vacation travel was "very strong," Rogers said.

He's hoping business travel will rebound at the beginning of the year, saying it's the meetings, conferences and conventions that hotels are most concerned about.