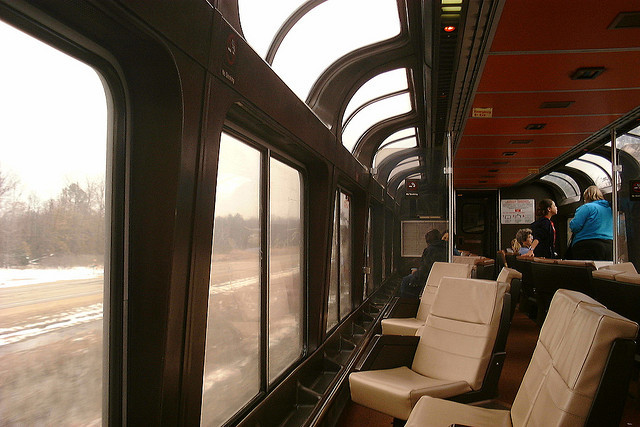 Above, a lounge car on the Empire Builder. Photo: LHOON (CC-BY-SA).

The Empire Builder, one of Amtrak’s most historically popular lines, is suffering as delays are causing a drop in ridership.

The line runs from Seattle to Chicago, traveling eastbound and westbound daily. It stops at six Wisconsin stations, from La Crosse to Milwaukee.

The Amtrak service has been canceled in parts of North Dakota and Minnesota this week after track operator BNSF Railway had to do maintenance on the line. Also, a few Amtrak stops in North Dakota are closed through September for other track improvements.

In addition, there has been massive growth in freight transportation nationally, which includes oil shipments from North Dakota. The increase in traffic has caused significant delays for the Empire Builder as it makes its way through Montana and North Dakota.

Amtrak spokesman Marc Magliari said it’s been a frustrating year and ridership is hurting on the Empire Builder. He said late trains are also more expensive to operate.

“We’re giving complimentary food and beverage service to try and apologize,” said Magliari. “The train crews themselves are getting into overtime because their trains are running longer than they’re supposed to run. So it drives costs up astronomically when trains are greatly delayed. It turns some one-time passengers into never-again passengers.”

Magliari said while Amtrak normally pays host railroads like BNSF an incentive for good performance, Amtrak has not been making those payments lately.

In an email, a BNSF spokeswoman says the company is investing $1 billion this year in rail improvements and expansions along its northern corridor. She said the improvements will help make Amtrak and freight traffic more efficient. It’s unclear when that work will be completed.