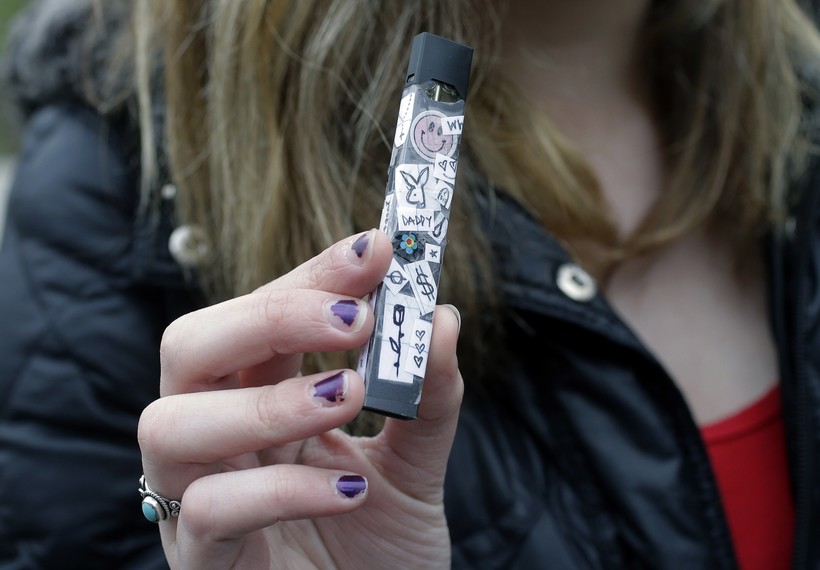 A high school student holding her vaping device outside of school in April 2018. Steven Senne/AP Photo

After Years Of Declining Cigarette Use Among Minors, E-Cigarettes Have Begun To Reverse That Trend, Researcher Says
By Mary Kate McCoy
Share:

The U.S. Food and Drug Administration announced Wednesday, Sept. 12, it may pull electronic cigarettes off the shelves if manufacturers and retailers don’t take steps to reverse the signs that youth vaping has reached "epidemic proportion."

The city of Neenah is taking matters into its own hands. City officials have proposed an ordinance that would ban the possession or use of all e-cigarettes by minors in the city. Current state law only bans minors from using e-cigarettes that contain nicotine.

"It’s next to impossible for law enforcement to tell if minors are vaping with nicotine," said Adam VandenHeuvel, assistant city attorney of Neenah. "We have to have a way to get some teeth behind the law."

The FDA ordered five e-cigarette companies to submit plans within 60 days proving they can curb teen use of the devices and sent warning letters to more than 1,300 retailers who are selling e-cigarettes to minors.

"This is a huge deal," said Doug Jorenby, director of clinical services for the University of Wisconsin Center for Tobacco Research and Intervention.

"This is really the first time that the FDA has used any of that authority (Tobacco Control Act) to draw a line in the sand if you will," Jorenby said.

Since 2009, the FDA has had the authority to regulate tobacco through the so-called "deeming rule," and in 2016 that was updated to include e-cigarettes.

The speed that e-cigarettes caught on among teenagers has largely taken the public health and science community by surprise, Jorenby said. High schoolers are nearly four times as likely to use e-cigarettes than adults, according to the Centers for Disease Control and Prevention.

"In terms of old-school smoking, we actually have been making progress in the last decade or so," he said. "But then e-cigarettes did appear ... really I’m ashamed to say as a public health person and scientific researcher, out of the blue ... and they have completely reversed that trend."

School is where it’s really taken off, VandenHeuvel said.

Neenah school officials say it began as a problem last year and continued to increase as the school year went on, he said.

Much of the call to action has come from educators who have seen how quickly e-cigarettes have grown in popularity – and the changing devices, Jorenby said.

"They resemble kind of a large USB drive ... they also don't produce as much vapor," he said. "These are fairly discrete in terms of the amount of vapor that's exhaled when someone uses it."

About 3 percent of adults use e-cigarettes, Jorenby said. For middle schoolers, it rises to about 4 percent, but then jumps to 11 percent for high schoolers.

And the majority of teens don’t realize whether there’s nicotine in them, he said.

"It's shocking when, you know, adolescents are surveyed," Jorenby said. "Close to 60 percent of them don't necessarily realize that there's nicotine in what they're vaping, even when it does contain that and is labeled as such."

While state law prohibits retailers from selling vaping liquid that contains nicotine to minors, they are still getting their hands on it, VandenHeuvel said.

The majority of adults who use e-cigarettes started with traditional cigarettes, and often continue to use them side by side, Jorenby said. Yet, among teens who have never smoked cigarettes, using e-cigarettes made them four times as likely to start using cigarettes.

"There's a clear trend that we've seen here that these actually are a gateway to using old school cigarettes, with all of the negative health effects that come with those," Jorenby said.

VandenHeuvel said companies are deliberately targeting kids and trying to hook them on their product by offering flavored e-juice like fruit and candy.

All of the major international tobacco companies have acquired at least one e-cigarette company, Jorenby said.

"I find it really hard to imagine somebody that's, you know, used to smoking a pack a day of Camels or Marlboros, you know, picking up a crème brûlée flavor pod," he said. "It just doesn't seem to track very well."

Neenah’s ordinance will go before the common council Wednesday where VandenHeuvel expects it to pass.