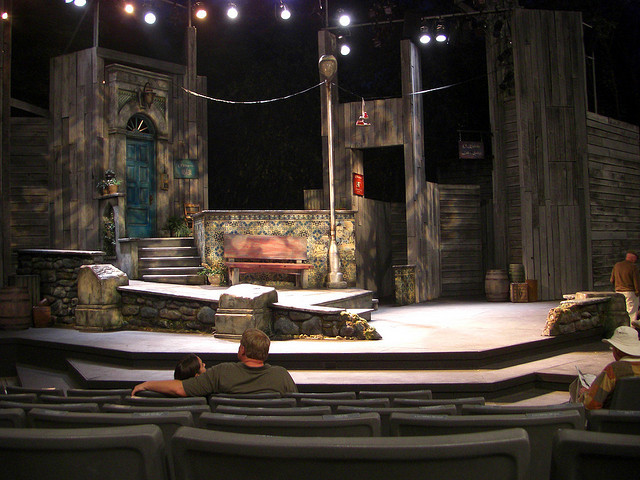 Frank's Production Of 'Alcestis' Will Be His Last With Renowned Theater Company
By Galen Druke
Share:

Anyone who has enjoyed a play at American Players Theatre in Spring Green, Wis., over the years might want to stop and give a tip of the hat to David Frank, who after 23 years of serving as the company's artistic director is retiring at the end of the month.

The company was in debt and producing four productions a year when Frank took over for two of the departing founders. Now, the company is operating in the black, puts on around nine productions a season and has been called the “best classical theatre company in America” by the Wall Street Journal.

Frank recalls his first day in Spring Green as a both peculiar and enchanting experience.

“It was extraordinarily hot and the reek from the porta-potty was almost visible as it wound its way down towards the expensive seats. You would have thought that most human beings would have spent the full price of a theatre ticket not to be present … I took one look at this place, and I thought, 'Oh, I want this job so badly,'” he said.

Frank not only inherited a unique setting for a theater company, but also a strained budget.

“The stage (was) wobbling and the premises (were) fairly primitive and there was not money in the bank, but what a precious inheritance that was,” he said.

Frank said that part of APT’s characteristicly simple set designs came about, in part, to the financial situation that he inherited. Working with a tight budget, he relied on the actors and the story. In the absence of elaborate costumes or sets, he said, language was king.

“These plays, properly done, in and of themselves, can be exciting to a contemporary audience. They don’t need messing up. They don’t need rotating stages and huge, heavy handed concepts that are essentially making a boring experience more acceptable. If you just do the plays and tell the stories well, they work,” said Frank.

After Frank finishes directing a production of the play “Alcestis,” Brenda DeVita will take over his position.

Correction: The subheadline of this story orginally said the play David Frank is currently directing is "Alcestic." That title was misspelled; the play is, in fact, "Alcestis."