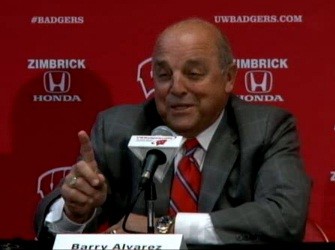 Alvarez Will Coach In The Rose Bowl

Barry Alvarez will be on the sidelines when the Wisconsin Badgers play in the Rose Bowl. He will take over head coaching duties following this week's announcement that former head coach Bret Bielema had accepted the job of leading the University of Arkansas' football team.

Alvarez, the former U.W. head coach, has never hidden his love for the Rose Bowl, which he calls the most beautiful venue in all of sports. But at a news conference this morning, he said he never considered naming himself interim head coach for this year's big game, until he was asked to do so by the football team's captains.

Alvarez says the upshot is that he can handle the public responsibilities of a Rose Bowl head coach, and leave game preparation and strategy to the Badger assistants.