A plume of darks smoke rises from the refinery fire in April 2018. Bob King/Duluth News Tribune

Environmental monitoring continues after a series of explosions and fires at Husky Energy's oil refinery caused a temporary evacuation Thursday.

Officials with the Wisconsin Department of Natural Resources, U.S. Environmental Protection Agency and the company continue to monitor air and water quality around the refinery. So far, there appear to be no health concerns associated with the incident. As the community recovers, questions are mounting over the refinery’s use of hydrogen fluoride, a highly toxic chemical.

The hazardous chemical could have posed devastating health impacts for the port community of 27,000. However, Superior Fire Chief Steve Panger said the tank with hydrogen fluoride had special water systems around it that were immediately activated when the explosion occurred.

"Obviously, once we had a fire, we were concentrating on that area to make sure that didn't get compromised," said Panger.

Damage from the fires at Husky Energy oil refinery in Superior can be seen on the tanks in this photo taken Monday, April 30, 2018. Olivia Shalaby/WPR

Husky’s emergency response team and Superior firefighters quickly doused the blaze. But asphalt leaking from the tank reignited and crews had to pull back. Panger said all they could do for a time was work to contain the fire.

"Basically this product is sort of like lava where it has a flow to it," said Panger. "The product is so hot when it burns that you can’t put water or foam on it. You have to wait until things burn off to some extent."

At 15,000 pounds, the tank had less than the roughly 75,000 pounds of hydrogen fluoride it usually contains. Panger said they used that information, plume models and weather patterns to determine the evacuation area. At the same time, he said the tank was being constantly cooled as crews tried to control the perimeter of the fire, which was about 150 feet away.

"Fortunately, the engineering and safety design equipment that is in place in that unit maintained its job and protected the first responders and also the citizens of the community,” said Schade, adding that the tank will be part of the federal investigations over what caused the incident.

In an email Sunday, Husky Energy spokeswoman Kim Guttormson wrote, "the hydrogen fluoride tank, which has not been compromised, has a dedicated fire suppression system, and will be part of the full investigation."

She added that an initial investigation is underway in areas of the refinery that are safe to access. She also noted that workers will continue to be paid as cleanup and repairs begin.

The use of hydrogen fluoride makes Superior's refinery one of the most dangerous refineries in the country, said Fred Millar, a Washington, D.C.-based chemical risks consultant. A 2011 report from the Center for Public Integrity detailed that hydrogen fluoride is used among 50 out of 148 refineries nationwide to make high-octane gasoline. It is used in refineries as part of the alkylation process.

Miller says the Superior refinery is taking more chances than it should.

"The reason is using hydrogen fluoride instead of a non-disaster chemical alternative, which is sulfuric acid," said Millar. "Sulfuric acid will not put a big, huge toxic gas cloud into your community."

While sulfuric acid is also dangerous, it remains a liquid and doesn’t have the potential to become airborne, unlike hydrogen fluoride, said Ron Koopman, a retired scientist who spent his career studying the release of chemicals like hydrogen fluoride at the Lawrence Livermore National Laboratory in California.

"It is a very dangerous and hazardous chemical of its own, but it’s used in refineries as part of a process, and of course the chemical and refinery industry is used to using hazardous chemicals, so this is just one of the most dangerous," said Koopman.

Once released, Koopman said hydrogen fluoride can be devastating to human health. It can attack mucous membranes and can cause lung damage when people are exposed to it.

"It destroys tissue in horrible ways," he said. "If you get it on your skin, it works its way toward the bone destroying all of the tissue in between."

The National Petrochemical and Refiners Association has said they've put systems in place to contain any mishaps at refineries and that shifting to alternatives is not easy or cheap.

Millar said it's a big deal for refineries to switch from hydrogen fluoride to sulfuric acid.

The Center for Public Integrity puts that cost somewhere between $50 million and $150 million for each refinery. Still, nearly two-thirds of refineries aren't using hydrogen fluoride.

The United Steelworkers has urged refineries across the country to phase out the use of hydrofluoric acid, saying more than 26 million people are at-risk in the event of a release.

Superior Mayor Jim Paine said the refinery's use of hydrogen fluoride will be part of conversations going forward.

"There are refineries that don’t use hydrofluoric acid for the refinement of gasoline," said Paine. "I think we do need to look at other options, but that’s something we’re going to be working on with the company going forward. We’re still in a public safety and cleanup phase."

Around 20 people were treated for injuries in Thursday's incident, but all have either been released or are reported to be in good condition. There have been no fish kills in a nearby creek and air monitors have shown trace levels for toxins below health standards.

Gov.  Scott Walker toured the damaged Husky Energy refinery Monday. Walker commended company, local, state and federal officials for their responses to the fire. He said the refinery needs to examine how they plan to rebuild.

"Not only from their standpoint, but working with the local, the county, the state, and federal government about ways that not just go back to where they were, but improve public health, public safety, natural resource management in a way that ensures people are first and foremost safe," Walker said. 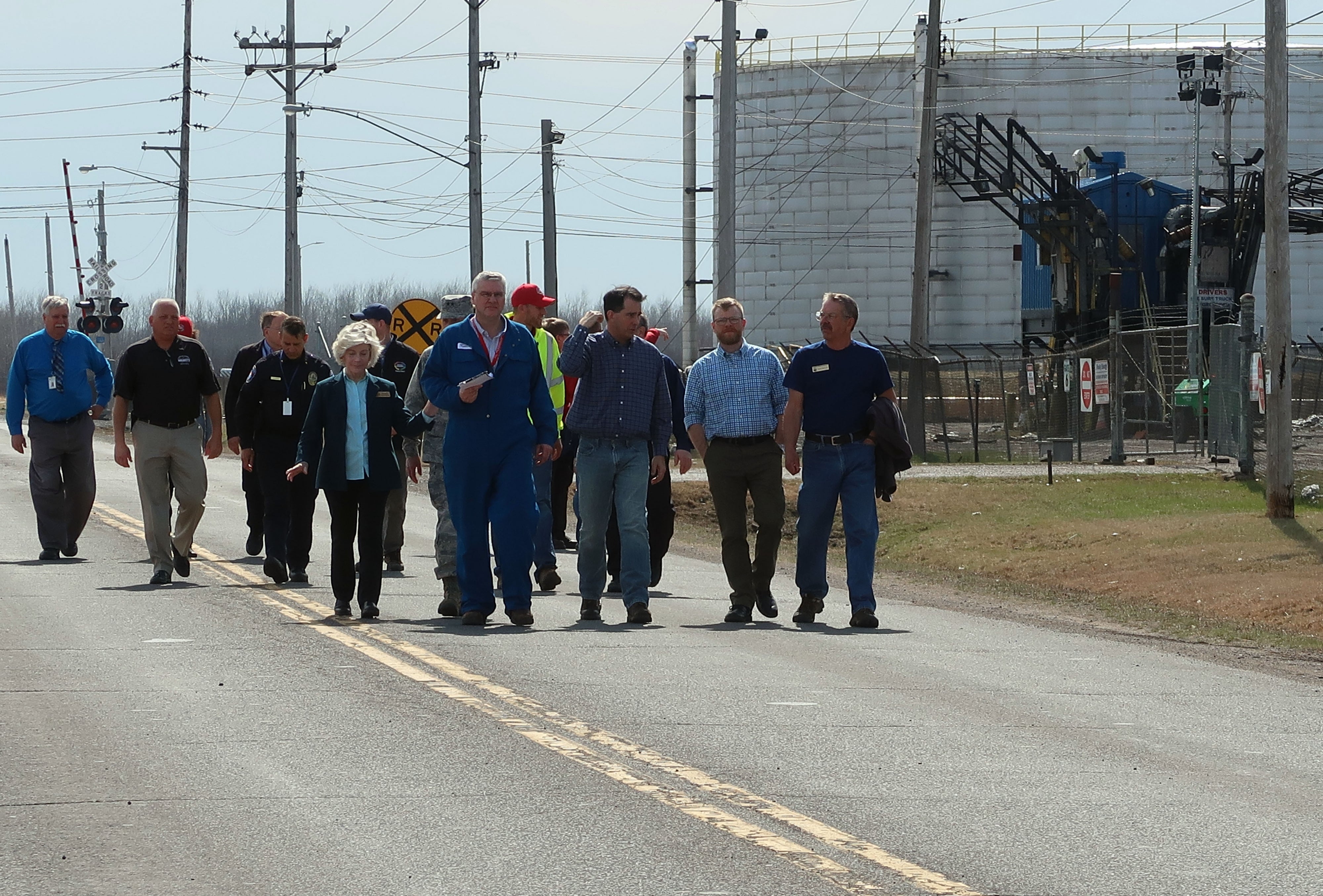 Schade﻿, the refinery manager, was at the press conference with Walker. When Schade was asked if the refinery would shift to a hydrogen fluoride alternative, he said the company would explore new technologies and different types of configurations. However, he said their first priority is understanding what happened, adding investigators are already gathering evidence at the refinery.

"Once they’re satisfied that they have the evidence and the information needed to make a proper assessment of what actually happened, then we will be allowed to start cleaning the area up and going to work, you know, repairing what’s damaged," Schade said.

He said it’s unknown how long that would take and it’s unlikely the refinery would be back in operation within the month. Federal agencies have said it will take months to investigate exactly what went wrong.

Superior Mayor Jim Paine said they plan to work with Husky to better the refinery and ensure the economy, safety and public health continues to improve.