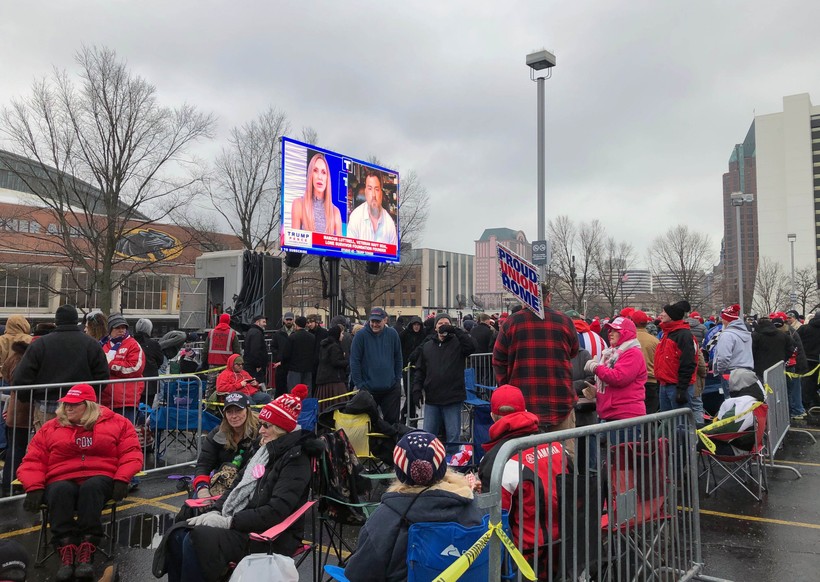 Hundreds of people gathered outside the Milwaukee Panther Arena in downtown Milwaukee on Tuesday, Jan. 14, 2020 ahead of the President Donald Trump rally. Corrinne Hess/WPR

Ahead Of Trump Rally, Milwaukee Streets Packed With Supporters

Downtown Milwaukee streets were filled as early as Monday afternoon with supporters and protesters ahead of President Donald Trump’s Keep America Great Rally on Tuesday evening.

Hundreds of people, many wearing red "Keep America Great Again" hats and the newer logo of "Re-elect Trump 2020 Make Liberals Cry Again" caps, stood outside of the Milwaukee Panther Arena waiting for the doors to open for the 7 p.m. rally. 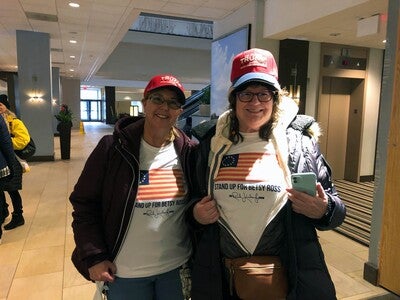 Karen Jeffrey, left, of Milwaukee, and Mary Ellen Schorsch, right, of Racine, said there is no better place to be than a Trump rally. The two were waiting for the President Donald Trump rally Tuesday, Jan. 14, 2020 in Milwaukee. Corrinne Hess/WPR

Mary Ellen Schorsch, of Racine, attended the rally with her friend, Milwaukee resident Karen Jeffrey. Schorsch said the best place to be is a Trump rally.

"I’m glad to be able to see my fellow Trump supporters because it’s not always easy in my regular day-to-day life, and you can’t always talk about it," Schorsch said.

Jeffrey said she likes Trump because of his family values.

"He’s never been a smoker or a drinker and his kids don’t, as far as I know, smoke or drink, and I think those are great values, you know in the inner core of being a family," Jeffrey said.

One Saukville family, who was uncomfortable giving their last name out of fear for possible political backlash, said they began standing in line around 10 a.m. Tuesday.

The family of four decided to go to the Trump rally because of their youngest daughter Ava, 14.

"She is a total Trump supporter," said Ava’s mom, Jody.

"I just love politics," Ava said. "Trump tries to change the country for the better. And gives people jobs and security."

Craig and Donna Minkley from Kenosha County were also in line around 10 a.m. Tuesday. They are hoping to sit as close to Trump as they can.

"He’s doing wonderful things for this economy and this state," Craig said. "There is a lot of fake news talking bad about him that people need to wake up to."

Donna said as an entrepreneur, things have been going really well in southeastern Wisconsin. 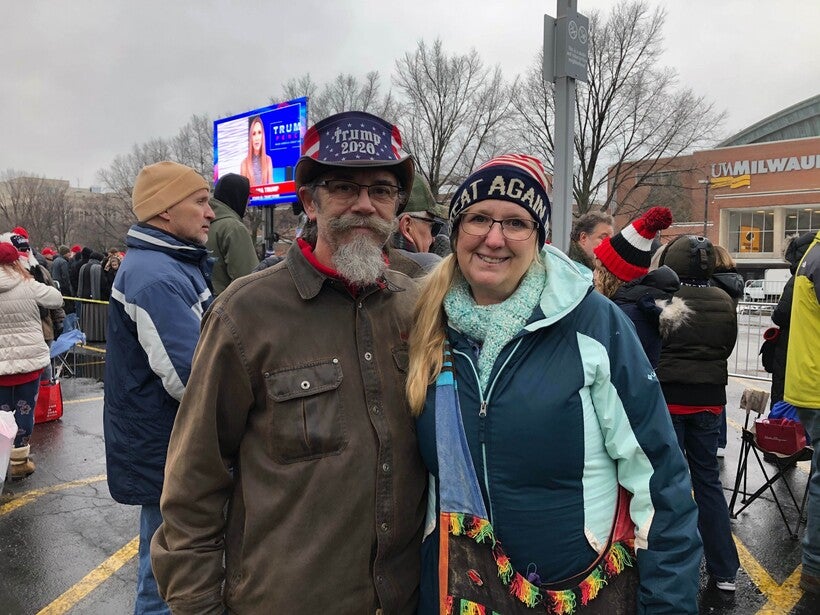 Craig and Donna Minkley from Kenosha County were in line around 10 a.m. Tuesday, Jan. 14, 2020. They hoped to sit as close to President Donald Trump as they could during his rally that night in Milwaukee. Corrinne Hess/WPR

Harold Barfknecht, of Mount Calvary, said he has never seen Trump, but has gone to many rallies for former Republican Gov. Scott Walker and for Republican U.S. Sen. Ron Johnson.

"I was in the Air Force 30 years," Barfknecht said. "Part of what we had to fight for is liberty to vote and get people to govern us that we want. So it’s nice to see it happen."

While supporters eagerly awaited Trump’s arrival, the Democratic Party of Wisconsin and doctors of the Committee to Protect Medicare were about six blocks away at Aurora Sinai Medical Center with Milwaukee Mayor Tom Barrett holding a press conference to highlight what they said were the president’s broken promises to health care.

"He loves talking about how much he hates Obamacare," Barrett said. "But what he hasn’t talked about and what he hasn’t done at all is offer anything to replace it." 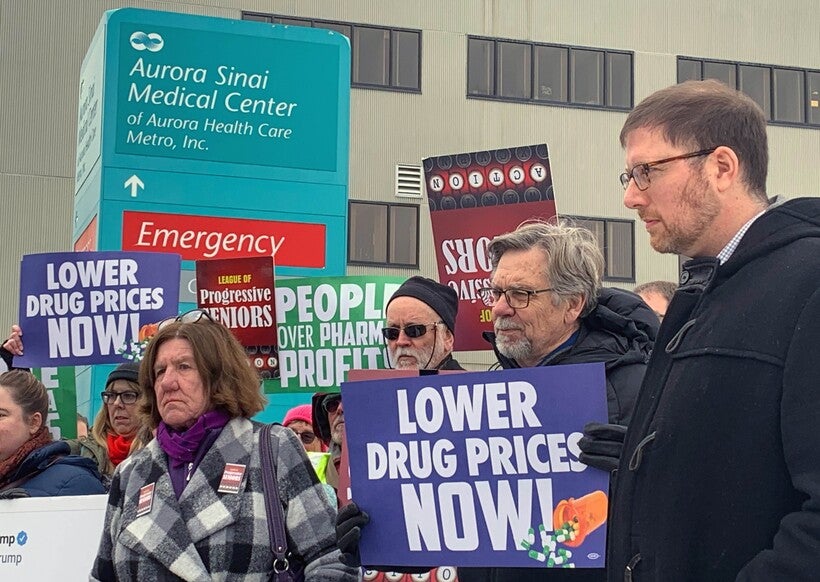 While supporters eagerly awaited President Donald Trump’s arrival Tuesday, Jan. 14, 2020, the Democratic Party of Wisconsin and doctors of the Committee to Protect Medicare were at Aurora Sinai Medical Center with Milwaukee Mayor Tom Barrett holding a press conference to highlight what they said were the president’s broken promises to health care. Alana Watson/WPR

Trump has been putting his focus on swing states like Wisconsin and Michigan during his re-election campaign.

Trump is expected to talk about health care, his impeachment and the economy Tuesday evening.

Ben Wikler, chairperson of the Democratic Party of Wisconsin, said he is one of the 2.4 million Wisconsin residents living with a pre-existing condition. He said his son has the same condition.

Trump promised in his 2016 campaign that everyone would have great health insurance and that he’d lower the cost of prescription drugs, but neither have happened, Wikler said.

"From day one he’s been attacking protections for people with pre-existing conditions, trying to destroy the Affordable Care Act, while lying through his teeth about his real plans for health care," Wikler said.

If the ACA is repealed, around 24 million Americans could lose their health coverage, Davidson said.

"It’s between co-pays and deductibles, the price of prescription drugs," Davidson said. "We know what we need to do for people, we swear a Hippocratic Oath when we finish medical school and then the system itself doesn’t allow us to do those things."

Milwaukee’s crowded streets Tuesday afternoon are an early indication of what the city will look like in just six months when the Democratic National Convention is hosted here.

From July 13 to 16, Milwaukee will host the convention and Trump’s political opponent will be chosen.