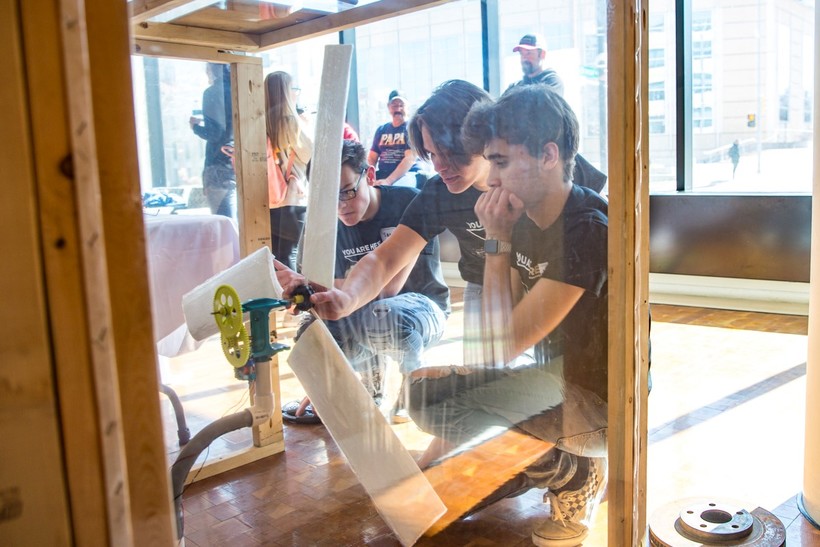 Then-juniors (left to right) Sean Cowin, Luke Kattenbraker and Landon Bilka of Mauston High School make adjustments to their turbine during the wind tunnel portion of the KidWind Challenge held at the University of Wisconsin-Madison. Photo courtesy of Luke Heath

When the COVID-19 pandemic shut down much of the state in mid-March, it shuttered schools, closed libraries and moved many workplaces from office buildings to the scattered homes and apartments of their employees.

For a group of physics enthusiasts at Mauston High School, it also took the wind out of their turbines.

The then-juniors, now-seniors had, at their physics teacher's urging, entered into the KidWind competition, building a wind turbine and tweaking it for maximum efficiency, to compete against other teams at a March 7 competition at the University of Wisconsin-Madison. Their second-place finish had set them on a path to nationals in Denver a few months later, but that was canceled due to COVID-19.

"We're like, well, there's next year, and it's going to be our last year, so we decided to go all out and do a really good job," said Landon Bilka, a senior on last year's second-place team. 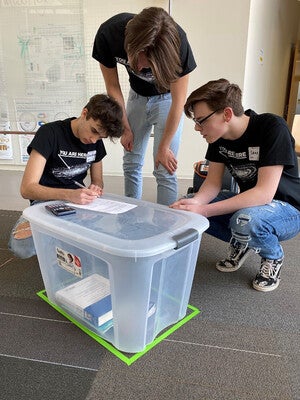 Last year, the team of Bilka, Nathan Amerman, Luke Kattenbraker and Sean Cowin competed, along with two other Mauston teams, in the KidWind Generator division of the competition, which had them using a generator provided by KidWind that was consistent across all the teams in that division, though they then built their own turbines and made adjustments to push it to maximum efficiency. This year, the team will compete in the open division, using a generator of their choosing. The seniors ordered two motors from Amazon, intending to test both and see which would work best.

In the months between March's school closure and Mauston's reopening this fall, the team did some tinkering at home. Bilka got a 3D printer for his birthday — "super nerdy thing to get for your birthday, but you know, it's awesome," he said with a laugh — and used it to make some of the pieces in the team's new turbine.

They're also using last year's lessons to come to the 2021 competition — which will be held virtually — a little more prepared than they were last March. Although they'd gotten their turbine into shape, they hadn't prepped for the presentation part of the competition, where they presented to a panel of energy experts about the workings and results of their project.

"We're trying to be a little more serious about our presentation and posters, explaining a little more, because last poster had a lot of ambiguous statements about what we were doing," said Amerman, laughing ruefully.

"There was a picture on the poster of (Nathan) making the poster, we were that hard up for material," clarified Bilka. "We were very unprepared last year, we spent most of our time on the windmill itself, not on the presentation."

This time, Amerman has been collecting and recording data more carefully throughout the process, and making plans early for the team's poster and explanation to judges.

Amerman and Bilka were recruited into the KidWind Challenge by their science teacher, Luke Heath. Amerman said he wouldn't have thought to join, but has loved the hands-on application of subjects that can sometimes feel flattened or simplified in a classroom setting.

"I liked the concept of figuring something out, and also the way that math can be applied to something that's more objective than you can get in a normal classroom," he said.

It's helped Bilka explore his options for next year when he goes off to college. He said working on the wind turbine helped him narrow down his interest to likely focus on mechanical engineering — and helped him think about where his interests might fit in efforts to push sustainability forward.

"This is one of the future technologies that's going to improve the world," said Bilka. "Before this, I knew nothing about wind turbines. This kind of gives you the fundamentals, how it works, and it improves your understanding — which I really enjoyed."

In addition to the group of seniors, Mauston is fielding two teams of sophomores, who are also returning after competing last year. One is sticking to the KidWind generator division, while the other is building their own generator.