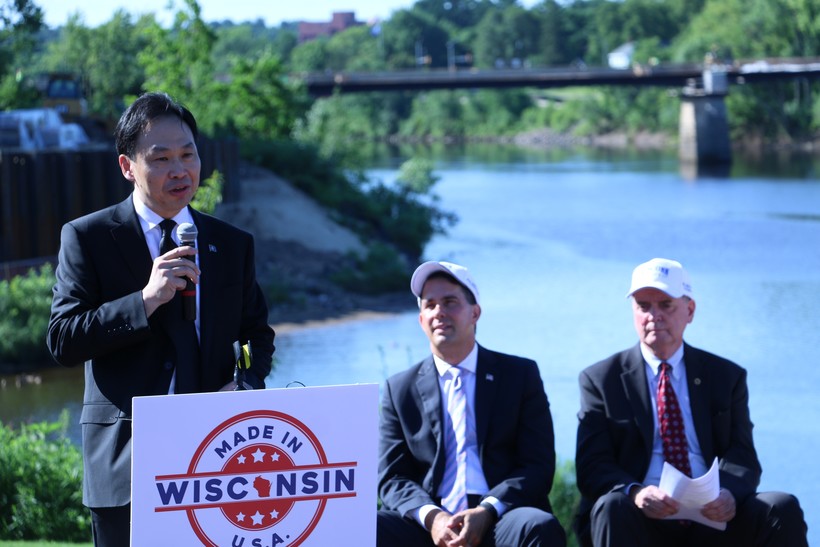 Foxconn Director of U.S. Strategic Initiatives Alan Yeung announces the company will purchase two buildings in downtown Eau Claire for a company research technology hub and a business incubator. Yeung said Foxconn the development will lead to 150 jobs in Eau Claire. The company hopes to acquire the two buildings by the end of 2018 with operations beginning in early 2019. Rich Kremer/WPR

After Foxconn's pledges have failed to materialize, a former executive is hired by UW-Madison College of Engineering

Former Foxconn executive Alan Yeung has been hired by the University of Wisconsin-Madison to "jump-start technology entrepreneurship efforts" within its College of Engineering.

Yeung was heavily involved in Foxconn's failed pledges to invest $10 billion into a high-tech manufacturing hub in Racine County and donate $100 million to UW-Madison.

An announcement posted Thursday by UW-Madison's College of Engineering announcing Yeung's hire lists him as an author, college alum and technology executive — it has no mention of Foxconn.

Yeung was hired as a "professor of practice for entrepreneurship" who will bolster efforts to connect campus research with industry, according to the announcement. He began the new job Friday.

"Alan brings invaluable experience in new business venture and technology commercialization," Ian Robertson, dean of the College of Engineering, said in the announcement. "Taking more of our world-class research to market more quickly is a top priority, and Alan’s leadership and expertise in addressing opportunities and achieving alignments make him the right person to begin this effort.”

Citing the hiring as a personnel matter, a spokesperson for UW-Madison's College of Engineering wouldn't provide information regarding Yeung's salary, hiring date and other details.

The college's announcement said Yeung earned a bachelor's degree in chemical engineering from UW-Madison in 1984, doctorates from Stanford University and an MBA from the University of California, Berkeley.

Yeung is quoted in the announcement stating he's honored to serve and collaborate with campus stakeholders.

"My goal is to develop best practices in innovation that will encourage and motivate inventors having technology ideas to explore the viability and feasibility of commercializing their technology," Yeung said.

"It's always hard when you fight for increased state investment in higher education & then see absurd spending decisions that piss money away," Hintz wrote.

Yeung was a prominent force in negotiations between Tiawanese tech-giant Foxconn, former Gov. Scott Walker and former President Donald Trump on a proposed $10 billion project to build a sprawling manufacturing hub churning out LCD screens in the Village of Mount Pleasant. The project was dubbed "Flying Eagle" and promised up to 13,000 Wisconsin jobs in exchange for an unprecedented $3 billion in state tax credits for Foxconn.

In June 2018, Trump, Walker and Foxconn Technology Group CEO Terry Gou broke ground at the site in Mount Pleasant. Trump called the project "the eighth wonder of the world."

In August 2018, Foxconn's Gou announced plans to invest $100 million in engineering and innovation research at UW-Madison. An announcement published by the College of Engineering the day the company shared news of its planned investment said the bulk of Foxconn's gift would go toward a new engineering building.

Three years later, in April 2021, Gov. Tony Evers and the Wisconsin Economic Development Corp. revised its contract with Foxconn to offer $80 million in tax breaks in exchange for 1,454 jobs by 2024.

The sprawling Mount Pleasant campus is mostly vacant now. On March 23, officials with the village and Racine County gave the first public update on the Foxconn project since 2019. Foxconn representatives were invited to attend but declined.

Jim Paetsch, executive director of the Milwaukee 7, a regional economic development group, told attendees that officials are looking to pursue other companies interested in locating at the site.

Along with Foxconn's original plans to create 13,000 jobs, the $100 million donation to UW-Madison has gone mostly unfulfilled. In August, UW-Madison Chancellor Rebecca Blank told the Wisconsin State Journal she didn't expect to receive the Foxconn gift.

State Representative Dave Murphy said he thinks it's a good idea for universities to connect with business professionals who can add real world experience to the mix. As for Foxconn's lack of follow through on it's pledge to UW-Madison, Murphy said Yeung should not be punished for it.

"I'm disappointed that Foxconn didn't keep its word on the money that it pledged to the university," Murphy said. "But I don't know that that specifically means this person should be somehow ineligible for employment there."

Foxconn did give UW-Madison $700,000, but a university spokesperson said the school hasn't received any other money from the company.