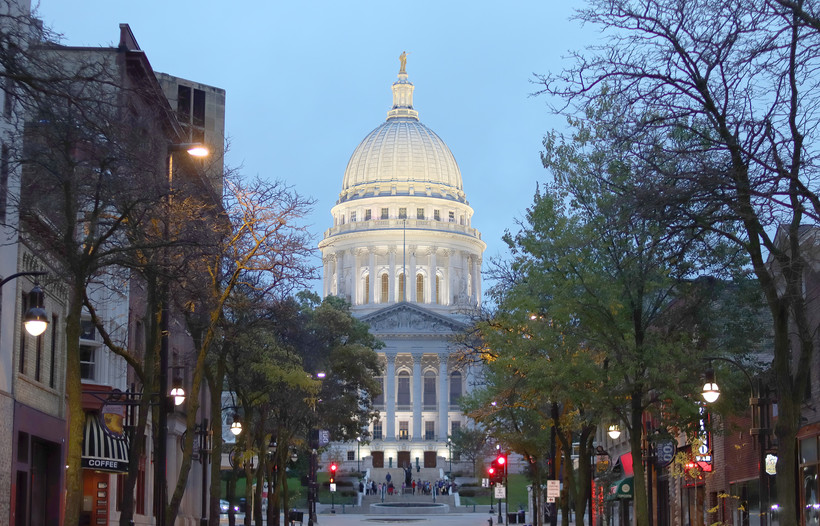 Candidates include 2 current state senators, a member of the Wisconsin State Assembly and the former mayor of Lancaster
By Leah Treidler
Share:

The office of Wisconsin lieutenant governor has few official duties, but in this election cycle it is among the most hotly contested races.

Eight Republicans and two Democrats are running for lieutenant governor. The elected candidate's main role will be to be available to take over if the governor dies, resigns or is removed from office.

Previous lieutenant governors have used the office as political stepping stones: Former Lt. Gov. Rebecca Kleefisch is in the race for governor and current Lt. Gov. Mandela Barnes is running for U.S. Senate.

In the Republican debate last week, David King, a pastor and the founder of Wisconsin God Squad, said he’s running because the state needs leaders who will make "tough decisions for the people."

"For too long, we have forgotten about the average person," he said. "So I'm in this race to make sure that we don't get forgotten anymore."

King said he wants to close loopholes in the abortion ban to ensure the state holds doctors accountable and doesn’t want to use state resources to support mothers. He also wants to get more police officers on the street by repairing the relationship between law enforcement and the community.

"Right now it's been destroyed because of the media," he said. "And you will never get anybody from the community to want to be a police officer until that relationship is fixed."

Will Martin, CEO of Wisconsin Diversified Investments, served in state government in several capacities under former Republican governors Scott Walker and Tommy Thompson. He said he decided to run because Wisconsin is "on the wrong track."

"I believe that I'm ready to serve with the next Republican governor to cut the size, the costs, taxes and regulation of state government, to end taxation of retirement income and to get tough on crime," he said in the debate.

Martin said he supports the current abortion ban and would push to expand WIC, the Women, Infants and Children program, which helps families afford adequate food and connects them with health and community services. One of his top priorities is to lower "the overall tax burden that’s impacting Wisconsin families and businesses."

"People are frustrated," he said in the debate. "I see it all over the state. And I look forward to being able to help our next governor on education reform and on taxation reform to move our state forward."

Roth supports Wisconsin’s abortion ban and said he wants the state to fund crisis pregnancy centers. If elected, he said he’d work to eliminate the state income tax and push for universal school choice, which would allow state money to flow to private schools and families that homeschool.

"We can talk about tax reform, education reform, a whole host of things that we can get done," he said in the debate. "But none of that happens unless we have a Republican governor, and I entered this race to help out whoever's at the top of the ticket ensure we retire Tony Evers this November."

Testin said he supports the current abortion ban and wants the state to invest in crisis pregnancy centers. One of his top priorities is to attract workers to the state.

"It's so critical with our aging demographics that we're doing more to build up our future workforce," he said.

David Varnam, former alderman and former mayor of Lancaster, said he’s in the race because he has the necessary experience to lead the state at a high-stakes time.

"We are at a pivotal moment, I believe," he said. "Inflation is high. Gas prices are high. People are looking for help from their government, and I think that we need all hands on deck."

As part of his faith, Varnam said he’s staunchly pro-life and wants to streamline the state’s adoption process. In office, he said he’d work towards implementing universal school choice and cutting taxes.

"We need to be bold on lowering our taxes on our businesses, our families and our individuals," he said. "Because we need to be competitive in the Midwest."

Werner is state ambassador of the conservative public policy organization, the Frederick Douglass Foundation. She said she’s in the race to lead the state away from divisiveness.

"I saw statues being torn down, and our … present lieutenant governor had an opportunity to actually speak up and talk about issues that divide us," she said. "He did nothing. I'm in this race to have those critical conversations to help the governor, whoever the governor will be, to move Wisconsin forward."

A top priority, she said, would be to push for universal school choice and expanding opportunities for students interested in careers that don’t require a college education. She would also work toward getting rid of current election machines and eliminating voting registration on election day.

Jonathan Wichmann, a small business owner, said he’s in the race because the executive branch "needs a lot of help."

"We need a lieutenant governor that will complement the governor, to watch out for blind spots and to set the vision overall for Wisconsin, especially when it comes to our economy and our jobs," he said. "Being a small business owner, I believe I have that skill set."

Wichmann said he’s pro-life, but wasn’t sure how the state should support parents who need help caring for a child.

Wichmann said he supports the certification of Joe Biden’s presidency, but "we need to focus on the election laws that were broken. The people that broke them need to be held accountable. I support paper ballots only, and we need to get the results on the same night."

"In March of 2020, our freedom was stolen from us. And no one stood up for us," he said in the debate. "I am running to hold those responsible for the last two and a half years accountable. And with the governor's help, we'll do that."

Yudes said he’s pro-life and supports criminally charging those who discard unimplanted embryos from IVF. He said he would use the office to lower taxes, invest more in rural areas and shrink the government.

"We can cut plenty of buildings … that we don't need, where we can save a lot of money and ease that tax burden," he said.

In the Democratic debate in mid-July, Peng Her, founder of the Hmong Institute who served on Gov. Tony Evers’ transition team in 2018, said the governor needs a partner with executive experience who will "listen to the people."

"I'm running for lieutenant governor to fight for our shared values," he said. "To protect our reproductive rights, end gun violence, to increase access to health care, to work on an economy that works for everyone."

Her said he supports increasing income tax on the wealthiest one percent, expanding broadband access and boosting funding for schools. One of his top priorities, he said, is childcare.

"We need to invest in our childcare system, make sure it's affordable and high quality so folks can get back to work," Her said.

As a father of two daughters, Her also said he’s pro-choice and will fight for "a woman’s right to choose."

Rodriguez is a member of the State Assembly representing Waukesha County and western suburbs of Milwaukee, a district she flipped in the last election cycle. Her chances of reelection have diminished under new Republican-drawn district lines.

In a debate last week, she said she's running to be the voice of the Wisconsin people in a high-stakes political era.

"There are so many things that are on the line today," she said. "Whether that's a woman's right to choose, environmental issues … fully funding our public schools," she said.

As a former nurse and healthcare executive, she said she’s prepared to "fight like hell" to restore access to abortion.

Among her main priorities are expanding childcare services across the state, supporting small businesses and averting a major win for Republicans this election cycle.

"I have over 60 endorsements all across the state," she said. "The lieutenant governor is going to need a large network to make sure that we can lift other candidates so that they do not get a supermajority in our gerrymandered state."