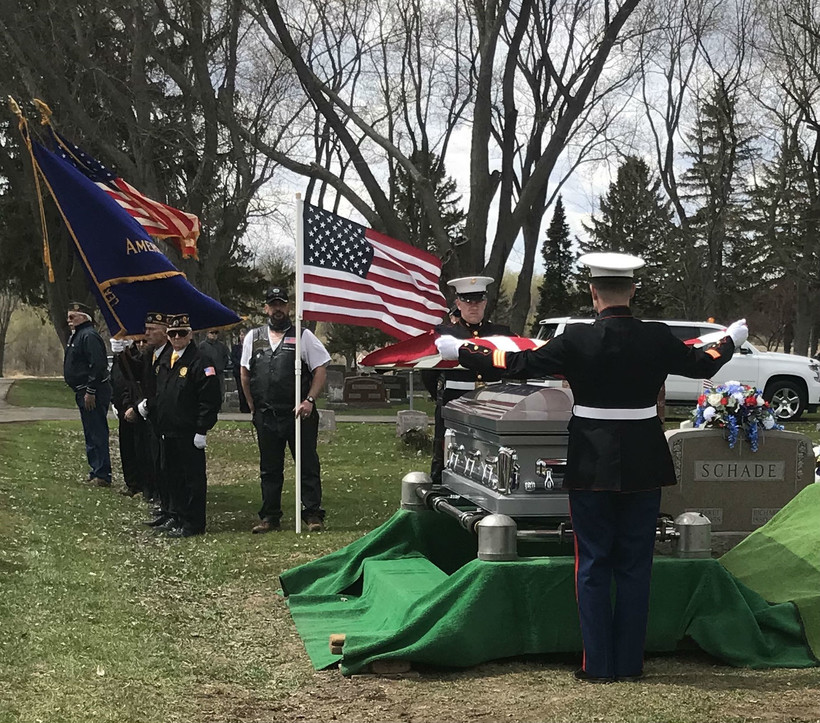 U.S. Marines hold the American flag that was draped over the casket of Lester A. Schade during a burial service in Abbotsford on Saturday. Schade died in 1946 in the Pacific Theater of World War II. Robert Mentzer/WPR

Lester A. Schade Was Presumed Lost At Sea
By Rob Mentzer
Share:

Lester A. Schade was born May 30, 1917 in rural Marathon County. He died Jan. 9, 1945 while a prisoner of war aboard a Japanese vessel during World War II.

It took nearly three-quarters of a century for the Marine to return home. But on Saturday, Schade's remains were laid to rest in Abbotsford.

Schade was presumed dead in an attack on an unmarked Japanese ship. His gravestone in Abbotsford was inscribed, "Our Dear Son – Lost at Sea."

Schade's nephew, Wayne Schade, grew up in Abbotsford. Now 79, Wayne lives in Austin, Texas with his family. He said that was virtually all the family knew about the circumstances of his uncle's death.

"They never really knew this story about him," Wayne said. "All they knew was that he was lost at sea. And that's all they ever knew about him."

In reality, Lester wasn't lost at sea. The Japanese military buried remains of some American prisoners at a grave site in present-day Taiwan. After the war, a U.S. agency recovered their remains. They couldn't identify the individuals at that time though and the U.S. government buried the remains of Lester and other servicemen in Hawaii as unknowns. 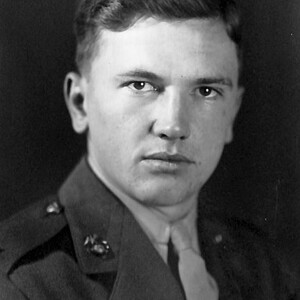 It wasn't until late 2017 that researchers from the Defense POW/MIA Accounting Agency, a federal team of analysts who seek to account for all missing U.S. service members, used dental records and other material evidence to identify that Lester's body was one of those buried there.

And it was another year and a half before Lester's remaining family members saw him buried alongside his parents.

"It's been quite a long journey," Wayne said.

Lester's death on the Japanese "hell ship" Enoura Maru came after a harrowing series of trials. Lester left for the Philippines in June 1940. It was there that he was captured by Japanese forces after the Allied surrender of Bataan.

With tens of thousands of fellow prisoners (66,000 Filipinos and 10,000 Americans) in April 1942, he was part of the Bataan Death March, a days-long forced march across the island. He was held prisoner in the Philippines until December 1944, when more than 1,600 Allied prisoners were brought aboard a ship headed for Japan. That ship was attacked by U.S. fighters and many Japanese troops and American prisoners died. Lester survived.

The next month, he boarded the Enoura Maru and there he died in an American attack on the vessel, which U.S. fighters didn't know was carrying prisoners of war.

Lester grew up on a dairy farm in the town of Holton with his parents and two brothers. Before joining the Marines, he distinguished himself in school. He graduated from Dorchester High School and the University of Wisconsin, then went to Marine officers training school in Philadelphia. He made captain in his military career.

Lester's parents and both of his brothers have died. Wayne was the son of Lester's brother, Ernest. Lester's two nieces, Wayne's sisters, also attended the funeral, some with their children.

Wayne said he was proud of his uncle and glad to see Lester put to rest alongside his parents.

"He's back to being in his roots, where he left almost 79 years ago," he said. "He now can be put back with my grandparents, here at this site."

According to the U.S. Department of Defense, there are 72,917 service members still missing from WWII.