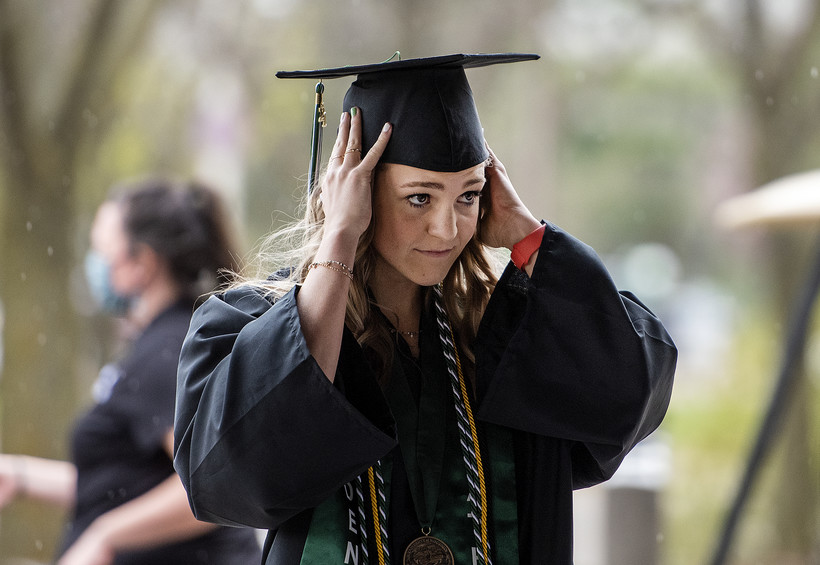 Graduate Jenna Vaaler adjusts her cap before receiving her diploma Saturday, May 15, 2021, during a drive-thru ceremony at UW-Green Bay. Angela Major/WPR

More than 89 percent of students enrolling in 2015 graduated within 6 years
By Rich Kremer
Share:

Students at the University of Wisconsin-Madison are graduating sooner according to school data. The campus's four- and six-year graduation rates have hit record highs.

UW-Madison Provost Karl Scholz said students who get their degrees within six or four years are able to start their careers earlier.

"Also, timely graduation reduces the cost of education, and we know that this is a major factor for family and student budgets," said Scholz.

UW-Madison's six-year graduation rate is more than 8 percentage points higher than other public research universities, according to university data. It's also the highest, by far, when compared with the rest of the UW System's campuses.

Scholz said things like student advising, timing of classes and reviewing courses required for degrees can help students graduate sooner. But he says the students UW-Madison is able to attract and enroll play a big role in the improving graduation rates.

"We get tremendously successful talented students at UW-Madison," said Scholz. "They've shown a good deal of accomplishment and promise in high school and earlier. And so, we provide a world-class education, so they'll be challenged here."

UW-Madison is more selective than other UW campuses when deciding which students to enroll. Campus admissions data show the university admitted just more than 60 percent of a record 53,829 students who applied for fall semester classes. That's about 22 percent lower than the overall admission rate of 82 percent across all state campuses, according to UW System data.

Behind UW-Madison, UW-La Crosse had the second highest six-year graduation rate with 70.9 percent of it's 2014 freshman class graduating within that time frame according to the UW System's Accountability Dashboard. UW-Eau Claire's six-year rate was 64.6 percent.

UW-Parkside had the lowest six-year graduation rate in the UW System at 38.6 percent. UW-Milwaukee had the second lowest rate of 45.6 percent.

The six-year graduation rate for UW-Madison students classified as underrepresented minorities among the 2014 cohort was 81.9 percent, according to UW System data. That's significantly higher than other UW campuses.