David C. Mish Jr. of West Allis was sentenced to 30 days in jail for his role in the U.S. Capitol insurrection of Jan. 6, 2021. He is the only Wisconsinite to have received jail time due to the insurrection. Photo via U.S. Justice Department court documents

6 Wisconsinites have been charged in US Capitol insurrection, but only 1 has gotten jail time

The six Wisconsinites charged with participating in the insurrection at the U.S. Capitol last year have faced misdemeanor charges and so far have received little or no jail time. One, a member of the Wisconsin National Guard, is still with the Guard after he pleaded guilty to participating in the riot.

The violent insurrection of Jan. 6, 2021 saw Capitol police officers beaten and trampled by protesters who overran them to force entry into the Capitol. The protesters sought to disrupt the legal counting of electoral votes in Congress to allow then-President Donald Trump, who lost the 2020 election, to retain office.

One year later, more than 700 people have been charged in the riots, which injured about 140 police officers and caused at least $1.5 million in property damage. One Capitol police officer, Brian Sicknick, died of a stroke after he was sprayed with a chemical irritant during the riot. Four officers later died by suicide. Two Trump supporters, Kevin Greeson of Alabama and Benjamin Phillips of Pennsylvania, died of heart attacks around the events; one, Rosanne Boyland of Georgia, died of an amphetamine overdose; and one woman, Ashli Babbitt of California, was shot and killed by Capitol police as the mob sought to break into the Speaker's Lobby inside the Capitol.

Authorities did not have evidence that any of the Wisconsinites charged engaged in physical violence or property destruction during the insurrection. Court documents show several made social media posts about their participation in the insurrection, which authorities later used in charging documents. Four of the six men charged have pleaded guilty to misdemeanor charges of illegally entering the Capitol. Two others have cases underway on charges including disorderly conduct and violent entry into Capitol grounds. 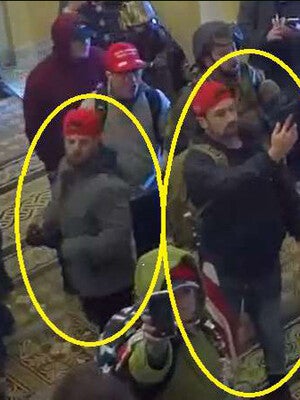 In early December, a judge sentenced Abram Markofski, 24, of La Crosse, to two years of probation and ordered him to pay $1,500 after he drove with his friend Brandon Nelson, 29, of Madison, to participate in the rally that would turn into the insurrection.

According to court documents, Markofski texted a friend during the riot, "We stormed the Capitol and shut it down. Currently inside still."

Markofski remains a member of the Wisconsin National Guard after his guilty plea to illegally entering the capitol. Major Joe Trovato, a spokesperson for the Guard, declined to say whether Markofski would face disciplinary measures from the Guard.

"The Wisconsin National Guard was committed to allowing the civilian judicial process to play out first before considering any other courses of action," Trovato said.

Nelson also pleaded guilty in September to entering the Capitol. He received a sentence of two years of probation and was ordered to pay $3,000.

According to court documents, Markofski and Nelson drove home after the insurrection and texted each other after 1 a.m. the next day.

"We held the line . . . No backing down," Nelson wrote, according to the criminal complaint.

The only Wisconsin insurrection participant who has been sentenced to jail time so far is David C. Mish Jr., 42, of West Allis. In November, a judge sentenced him to 30 days in jail for illegally entering the Capitol. 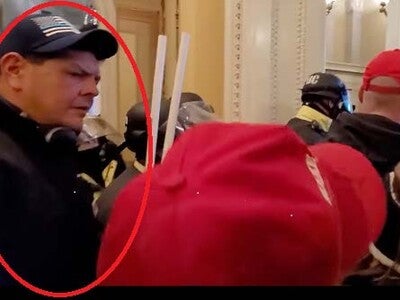 David C. Mish Jr. told police he was outside the Speaker's Lobby in the U.S. Capitol during the insurrection of Jan. 6, 2021. Photo via U.S. Justice Department court documents

Mish has a lengthy court record. In 1998, he was found guilty of felony child abuse in Milwaukee County. He’s been found guilty of drunken driving and driving without a license. He’s been sued for failure to pay insurance bills and tax delinquency.

According to court records, he rented a car to drive from Wisconsin to Washington on Jan. 5, 2021. He was among the group that tried to force entry into the Speaker’s Lobby of the Capitol and witnessed Babbitt's death.

In an interview with police after the riot, Mish downplayed the violence that had been a part of the protest.

"That violence that they're talking about? Oh, cut it out," he said, according to court documents. "There was three windows (broken). You better knock it off. You come to Kenosha, Wisconsin and I'll show you violence."

'I am wanted by the FBI': Eau Claire man posted photo of himself on Facebook 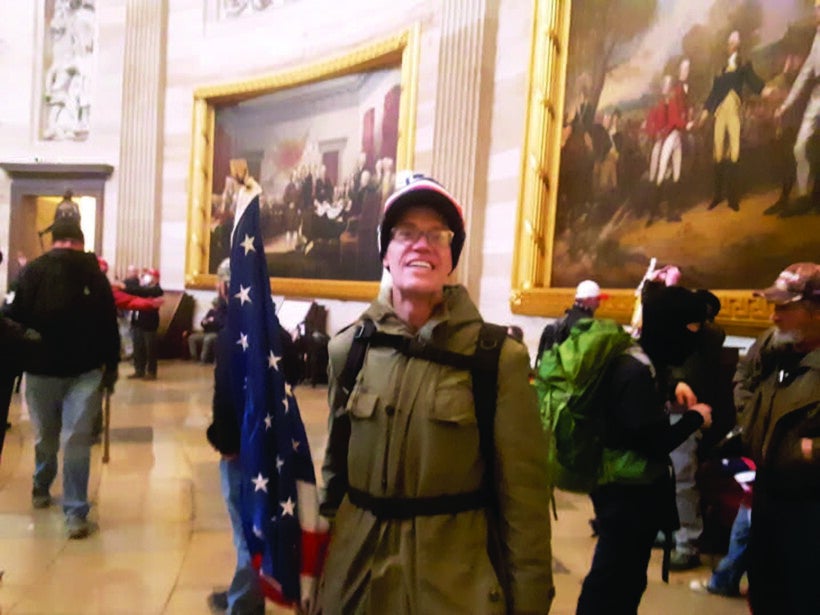 Kevin Loftus of Eau Claire posted to Facebook a photo of himself inside the U.S. Capitol during the insurrection of Jan. 6, 2021. Photo via U.S. Justice Department court documents

Kevin Loftus, 53, of Eau Claire, wrote on Facebook that he was "one of 700 inside" the Capitol during the insurrection, according to court documents.

"That's right folks," he wrote, alongside a photo of himself carrying an American flag, "some of us are in it to win it."

In a later Facebook post, Loftus shared a law enforcement post with his photo on it, writing, "I am wanted by the FBI for illegal entry."

Loftus pleaded guilty in October to entering the Capitol. According to his plea agreement, the charge carries a maximum sentence of six months in prison; none of the Wisconsinites who've pleaded to identical charges have been sentenced to that much time.

Loftus's sentencing is set for Jan. 31. 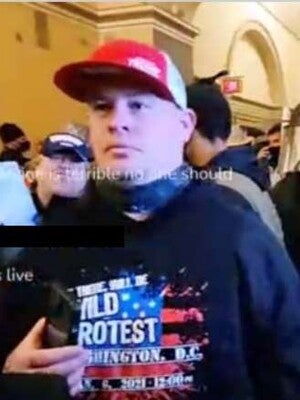 Michael Fitzgerald of Janesville wore a custom T-shirt promising "wild protest" at the insurrection of Jan. 6, 2021, according to an image in court documents pulled from an internet livestream. Photo via U.S. Justice Department court documents

Michael Fitzgerald, 42, of Janesville, is a former U.S. Marine communications specialist who owns a business selling patriotic-themed clothing and operates a veterans nonprofit. He pleaded not guilty to charges of violent entry and disorderly conduct on Capitol grounds as well as obstruction of law enforcement.

According to court documents, he wore a T-shirt reading, "There will be wild protest," referencing the planned Jan. 6, 2021 events. Video footage shows him "near the front of the line of rioters, participating in the push against law enforcement officer" barring the doors of the Capitol. In several images, he also appears to be filming the events with his phone.

Authorities say Joshua Munn, 24, of Melrose, traveled with his family from Texas to participate in the protest. In court documents, a trailer used by the family bears stickers reading "D.C. bound" and "We are Q," referring to the QAnon conspiracy theory, which held that Trump was secretly battling a ring of Satan-worshipping pedophiles and planned mass arrests and executions of hundreds or thousands of people.

According to court documents, Munn wrote on Facebook on Jan. 6, 2021 that he had participated in the insurrection with his family, that "it was extremely cool" and "we did enter the Capitol building."

Munn's case is ongoing. He's charged with entering the Capitol and with disorderly conduct.

An unknown number of Wisconsinites attended the protest on the National Mall at which Trump spoke but did not enter the U.S. Capitol. One of them was Republican congressional candidate Derrick Van Orden, who narrowly lost a congressional campaign in 2020 and is running again this year.

In June, The Daily Beast published a report on Van Orden's use of campaign funds to attend the rally. The report included a photo showing Van Orden inside a restricted area of the Capitol grounds. Van Orden told WPR the report was "inaccurate" and has denied he was ever in a restricted area. On Jan. 6, 2021, Van Orden said in a statement that he had left the rally when it "devolved into unlawful political violence" and that he "categorically denounce(s) all forms of political violence." He also called for those involved in the crimes to be "prosecuted to the fullest extent of the law."

According to The New York Times, more arrests and charges are possible as the Justice Department continues investigating the insurrection.