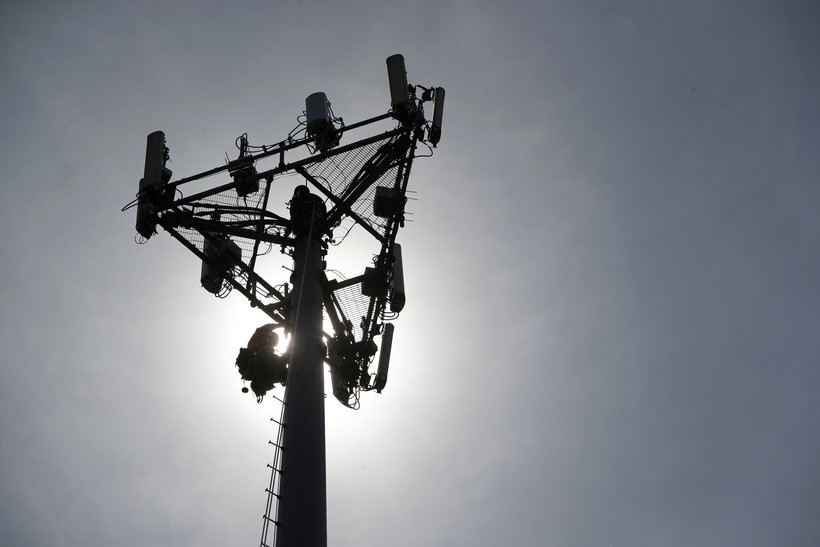 In this May 22, 2017, photo Nick Blase with True North Management Services climbs down from a cellular phone tower after performing maintenance as it is silhouetted against the sky in High Ridge, Mo. Jeff Roberson/AP Photo

5G Cellular Network Could Be In Milwaukee For Democratic National Convention

For the last year, Cleveland-based fiber technology company Everstream has been expanding into the greater Milwaukee and plans to begin providing service next month, setting the stage for the installation and expansion of 5G cellular technology.

Everstream is investing $27 million in fiber expansion in Milwaukee’s western suburbs into downtown Milwaukee. These fibers can be used by businesses throughout the Milwaukee-area.

The company also plans to spend up to $200 million throughout Wisconsin, adding high-capacity fiber in Madison and Green Bay, said Brett Lindsey, Everstream president and CEO.

Everstream is a network provider for businesses, with about 50 percent of its revenue coming from selling network services to places like the Fiserv Forum. The other half comes from selling to wholesale carriers, like Sprint and AT&T.

Fifth generation, or 5G wireless, is talked about a lot, but is a mystery to most people. Only a handful of cities have it including Sacramento, Houston, Los Angeles and Indianapolis, according to NPR.

The promise of 5G lies in its speed. It will decrease buffering on applications like Netflix and documents and other files will download faster, Lindsey said.

5G is also built differently than current network technology. Currently, cell towers are huge and cover several miles. 5G cell towers are small and cover only a couple thousand feet. They can easily be installed on telephone poles and light poles, according to NPR.

The work Everstream is doing in Milwaukee coincides with the Democratic National Convention, which will be held in the city July 13-16.

Omar Shaikh, who chairs Visit Milwaukee, said he doesn’t know if 5G will be ready for the Democratic National Convention, but he welcomes the work Everstream is doing.

"If companies are willing to come in for a major event, we need to welcome that," Shaikh said. "It is going to be so much easier to sell the city if we are on the forefront of technology and we have the infrastructure moreso than any other city."