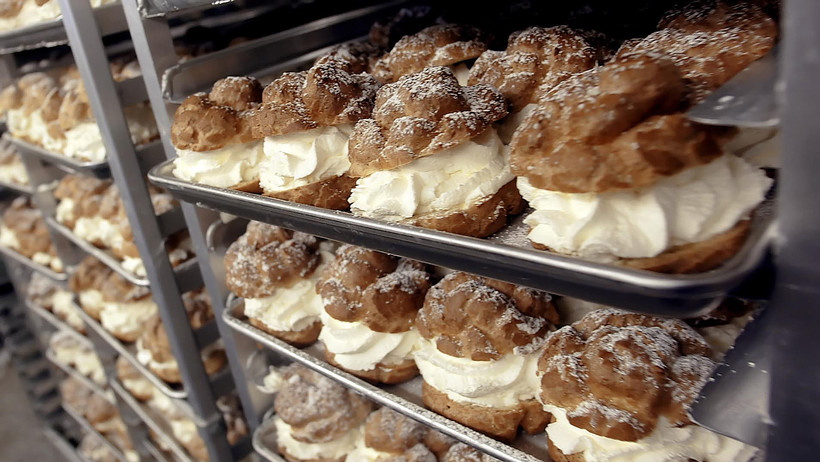 5 New Foods To Try At The Wisconsin State Fair

While Cream Puffs Will Always Be A Staple, 80 New Food, Beverage Creations Added This Year
By Mary Kate McCoy
Share:

A few things have changed since the first state fair in Janesville in 1851 when it cost about a dime to get in, and featured a 200 pound squash and a plowing contest with teams of horses along the Rock River, said Jerry Apps, an author and professor emeritus at the University of Wisconsin-Madison.

Originally, the fair’s purpose was to help farmers improve their practices, he said. But after World War II, the focus shifted.

"It began to shift more toward helping the urbanite understand where their food came from and to understand a bit about what agriculture was like in the state and what products were produced and who was doing it," Apps said. 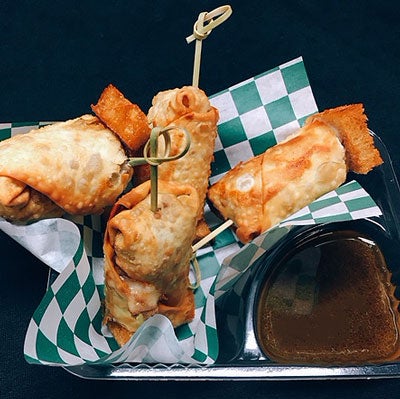 French onion soup on a stick. Photo courtesy of the Wisconsin State Fair.

And that focus on food has remained.

While the fair’s cream puffs hit iconic status long ago — they’ve been making them since 1924 — they are far from the only treat to be on the lookout for this year.

The fair will feature 80 new food and beverages, some of them on a stick, but not all, said Kathleen O’Leary, CEO of the Wisconsin State Fair.

"It's not just all on a stick and it's not just all bad for you," she said. "If you really want to go healthy, we have healthy, like salad on a stick ... a skewer of all fresh vegetables. We really tried to appeal to whatever it is that you are looking for."

But if you're looking to indulge in that staple fair food on a stick, O'Leary suggests snickers in a waffle on a stick, from WaffleChix, located on Grandstand Avenue. It's as straightforward as it sounds – a snickers bar is dipped in waffle batter then cooked on a waffle iron and put on a stick.

A more savory option is French onion soup on a stick.

"We can go really far," O’Leary said of crafting stick fare from a soup flavor. This option comes from Slim's PBR Park on Badger Avenue. Both mozzarella and Swiss cheese are mixed with caramelized onions and then rolled into a wonton to be deep fried. The wonton is then sliced in half, topped with a baguette crouton and served with a side of onion au jus for dipping. 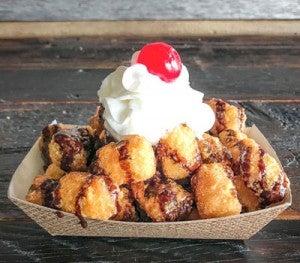 Joey's Seafood & Grill on Central Avenue sweetens up a creamy rangoon with strawberry flavoring. This treat is created by taking a wanton shell and filling it with a mixture of cream cheese and strawberry preserves and dusting it with powdered sugar.

For another sweet twist on a classic finger food, try Knucklehead's sweet tots, tater tots covered in a mix of cinnamon sugar and maple syrup.

Wash these down with Green Mint Milk, the newest flavor from the Milwaukee Bucks Milk House that has already proven to be a hit, O'Leary said. New flavors are added every year to the milk house, a tradition started 30 years ago by Herb Kohl.