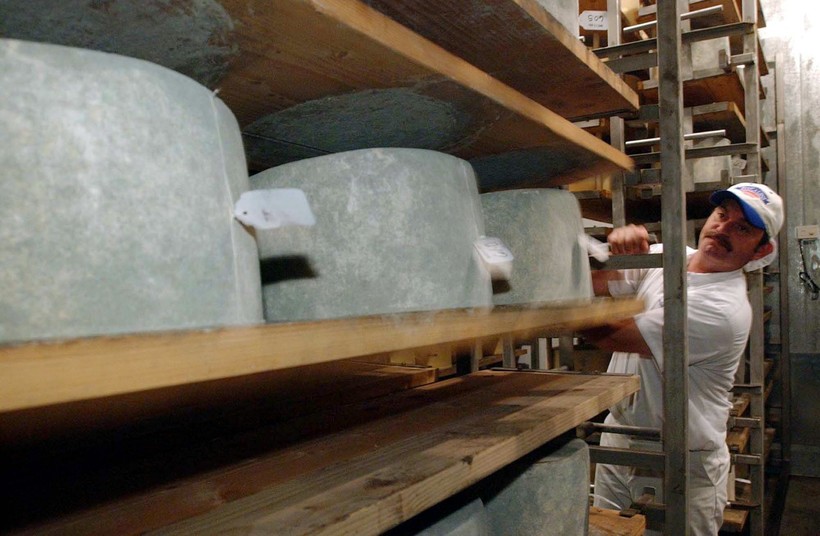 With More Than 600 Varieties Produced In Wisconsin, There's A Style For Every Palate
By Mary Kate McCoy
Share:

For something with so few ingredients, cheese is an amazingly complex food.

Milk can be transformed into a delicious tangy chevre, or maybe a sharp cheddar with the simple addition of rennet, a starter, salt, and some heat and time.

"What's amazing about cheesemaking is that at every point in the process a maker can make small modifications and unique tweaks to what they're doing and wind up with something that is designed to age, versus designed to be eaten immediately," said Liz Thorpe, owner of the consulting firm The People’s Cheese and author of several books on cheese.

But choosing a cheese may not seem quite so straightforward. Are you looking for hard or soft, mild or pungent?

"Cheese works like us, we get drier with age," Thorpe said. "So if you think about a soft, creamy cheese like a brie versus the hard, grainy, crumbly cheese like a parmesan, very basically a Parmesan is much older and it has much less water in it."

There are exciting things happening in cheese, said Tia Keenan, author of three books about cheese. That’s partly due to strong traditions of cheesemaking, but also the breath of fresh air brought into the industry from the artisan and craft food movement of recent years.

And where better to sample some of the best cheeses than America's Dairyland?

"We're seeing some real skill and craft going into some of these cheeses," she said. "Wisconsin has this interesting mix of sort of big producers and more mainstream type of production and is also home to people who are doing experimental smaller batch stuff."

After all, Wisconsin's nearly 1,200 licensed cheesemakers produce more than 600 styles and varieties of cheese — nearly double the number of any other state.

To help narrow down the list and guide you in the direction of great cheeses, experts Thorpe and Keenan highlight their favorite cheeses in Wisconsin.

"Lots of Americans have heard the name Gouda, but most of us are familiar with what's a young Gouda," she said. "But aged Gouda is a totally different proposition, and Marieke Gouda is making really the only aged Gouda in the United States."

Aged for one to two years, it tastes like butterscotch and toast, and is hard and grainy, Thorpe said. Marieke Gouda is also a farmstead producer, meaning it owns all of its animals and uses them to make their cheese.

A hard, Alpine style cheese, similar to gruyere, Pleasant Ridge Reserve comes from a dairy farm in the Driftless region of southwest Wisconsin. It’s a seasonal cheese, produced in the summer months from grass-fed cows.

"Pleasant Ridge was recommended by a bunch of us, and is one of my favorites," Thorpe said.

Cheddar is arguably the most iconic cheese in the United States, Keenan said. And Wisconsin is the leader in U.S. cheddar production.

"The cheese maker there (Bleu Mont Dairy), he's making really beautifully crafted, artisan cheeses with such incredible attention to detail and flavor development," she said. "He’s also kind of a renegade in the Wisconsin cheese scene … who's really deep into exploring the integrity and the connection to the earth in his cheeses."

Another seasonal cheese, Rush Creek Reserve is made in the fall and early winter when the cows make the transition from pasture to hay. It’s a soft-ripened cheese, bound in a strip of spruce bark.

"It's almost pudding, you can scoop it up with a spoon," Keenan said. "It's silky, it's velvety, it's very rich."