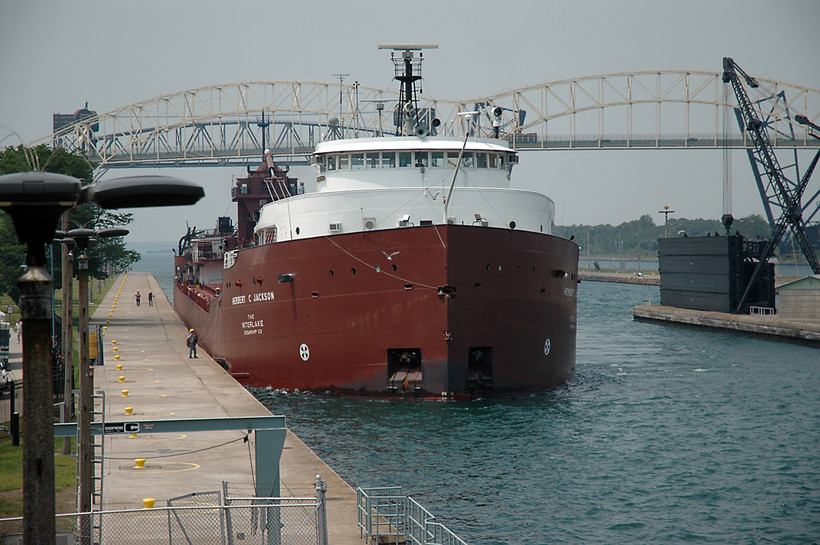 Last year, workers at a Superior shipyard were exposed to unsafe lead levels while working on the 60 year-old Great Lakes freighter Herbert C. Jackson shown in this picture.

Three new lawsuits have been filed against a northern Wisconsin shipbuilding company on behalf of workers exposed to unsafe lead levels last year while working on a Great Lakes freighter.

Fraser Shipyards in Superior now faces a total of four lawsuits that have been brought on behalf of 44 workers.

The lawsuits were filed Wednesday in U.S. District Court for the Western District of Wisconsin. The complaints name Fraser Shipyards, Capstan Corporation, Northern Engineering Company and the Interlake Steamship Company alleging they failed to protect workers from lead exposure and take appropriate action.

Attorney Matt Sims with Chicago-based Rapoport Law Offices is representing workers who were diagnosed with lead poisoning after making repairs to the Herbert C. Jackson.

Sims said workers have experienced a range of health issues due to lead poisoning. One worker has been unable to return to work, and has problems breathing and thinking, Sims said.

"A gentleman who could speak fluidly and without hesitation before this toxic exposure now stutters when he speaks," the attorney said. "He’s had changes in his personality. He finds it difficult to focus on everyday mundane tasks that any person wouldn’t have trouble with, and he experiences tremors to the extent that he’s unable to hold a welding torch anymore."

Fraser agreed to pay the Occupational Safety and Health Administration a $700,000 fine earlier this year for exposing workers to unsafe lead levels. Sims said workers are seeking compensation for personal injury, pain and suffering, medical care and lost work in the lawsuits.

"With respect to Fraser, the monies paid to OSHA — none of that went to the benefit of anyone who was actually harmed in this," Sims said. "The reality is the way the OSHA situation culminated, Fraser never admitted guilt — never admitted fault. We don’t expect them to do that in this case."

However, Sims said they are seeking punitive damages and a finding of fault in the lawsuits.

"We have not seen or had a chance to review any additional litigation in this matter," Farkas said. "We cannot comment on the allegations in the lawsuits until we have had the opportunity to do so."

An OSHA investigation last year found Fraser Shipyards was aware of lead on the Herbert C. Jackson before the ship arrived for repairs. The agency began investigating complaints from workers and subcontractors about safety and health concerns in early February, but the company didn’t conduct its own blood level tests until late March. Those tests of 120 workers showed 75 percent had elevated levels. The OSHA investigation also found 14 workers had blood lead levels up to 20 times the legal limit.

A report by Wisconsin and Minnesota health officials released earlier this year showed 171 out of 233 workers tested had blood lead poisoning.

According to Fraser, the company has since enacted a safety improvement program that includes protective gear, breathing equipment and suits to enhance safety.