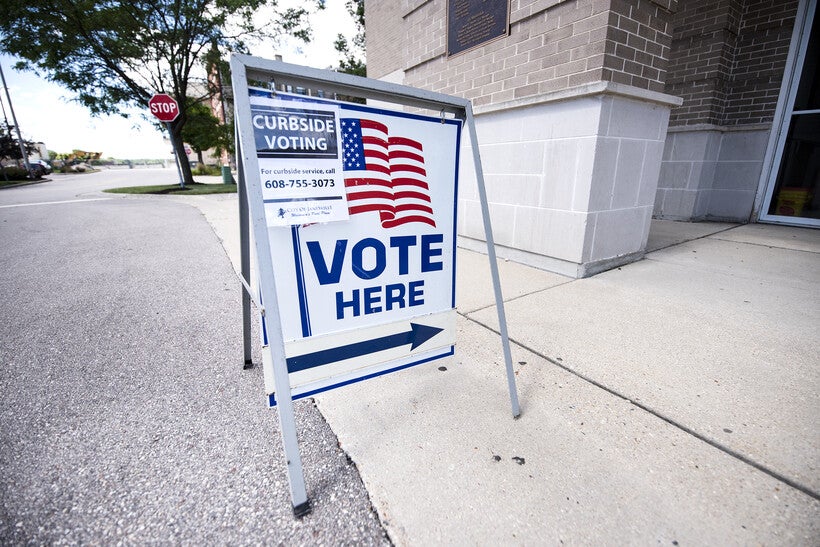 A sign at an in-person early voting location explains how to access curbside voting on Monday, July 27, 2020, in Janesville, Wis. Angela Major/WPR

In 2022, Wisconsin voters approved $1.7B in new spending for local governments, schools

Voters around Wisconsin this year approved increasing spending on local governments and public schools by more than $1.7 billion via more than 100 referendum questions.

A new report by the nonpartisan Wisconsin Policy Forum shows there were 104 referendum questions on Nov. 8 ballots seeking voters' permission for cities, villages, towns, counties and public school districts to exceed state limits on property tax increases. The report states unofficial election results show voters approved 82 of them, which works out to an overall passage rate of nearly 79 percent.

WPF senior research associate Ari Brown told WPR a number of records were broken in 2022. He said the number of local government, or municipal, referendums stands out.

There were at least 31 municipal questions this year, with the bulk asking for increases to pay for additional police, fire and emergency medical services. Twenty-five of them, or more than 80 percent, passed.

Brown notes that property taxes are the main source of revenue for local governments and state aid hasn't increased for more than a decade.

Municipalities are allowed to raise property taxes without voter approval by a formula tied to new construction. Brown said statewide, that's worked out to around 1.8 percent.

"As we know, inflation, especially over the last year and a half, has been much higher than that," he said.

Public school districts also saw a wave of referendums approved this year. That included approval of 64 of 81 referendum questions put to voters on Tuesday.

"They have been very popular, especially when pitched while other, higher turnout and higher profile elections are on the ballot," Brown said.

The WPF report notes that despite the high success rates of public school and local government referendums this year, there is a question of whether the trend could "add to the disparities between wealthy communities and those of lesser means."

An interactive map of school district referendums offers a potential case in point. Districts in and around larger cities like Madison, La Crosse and Milwaukee generally saw much larger spending approved by voters than districts in more rural parts of the state.

"These are districts that can go to their voters and ask for quite a bit," said Brown. "And it probably has a fairly good chance of passing versus, you know, other parts of the state."