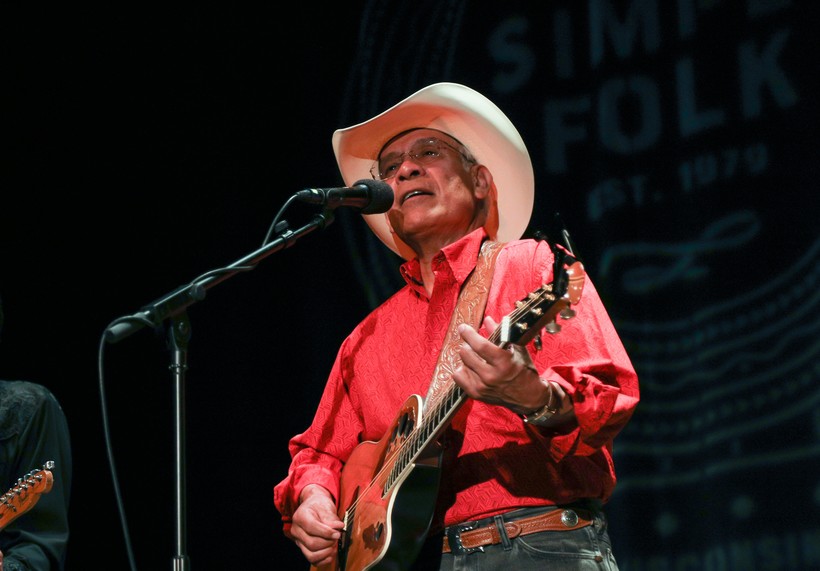 One of the things I love about folk music is that it is very much in the "now." Music has always had a way to celebrate what’s happening in our lives in the present or to lift us up during times of trouble. Cris Plata’s performance at this year’s "Simply Folk" Shindig was a great example of being in the now.

He opened his set with a song written by his wife, Ann Plata, who also performed with Cris that night as part of the band Extra Hot. "Goodbye, Butterfly," originally on his album, "Migration Road," celebrates the monarch butterfly and its journey over thousands of miles to its winter home in Mexico. The butterflies have been in the news lately as they are facing extinction due to climate change, pesticide use, habitat loss, and the possible removal of federal protection.

Later in his set, Cris dedicated the song, "Hurricane," to the people living in the panhandle of Florida and in Puerto Rico. As part of his intro to the song, he said, "There’s a lot of less fortunate people than we are, right now, and let’s not forget them."

Introducing his final song of the evening, "Fresh Horses," Cris said the song was played on a radio station at the Standing Rock Reservation in South Dakota during the demonstrations against the Dakota Access Pipe Line in 2016 and 2017. Cris dedicated the song to "all my Native American brothers and sisters who stood united out there."

Mary Gauthier and Dom Flemons continued the evening’s performances, similarly capturing the spirit of this moment in time. During her set, Gauthier shared music from her Grammy-nominated album, "Rifles and Rosary Beads," which features songs she co-wrote with veterans and their spouses about their experiences.

Flemons performed songs from his Grammy-nominated album, "Black Cowboys," bringing the little-known stories of African-Americans in the Old West to a new audience during our current time of much struggle and discussion around race in the United States.

The evening celebrated not only "Simply Folk" but also the power of music in our lives. You can hear Cris Plata's performance and the entire Shindig by clicking on the link above.