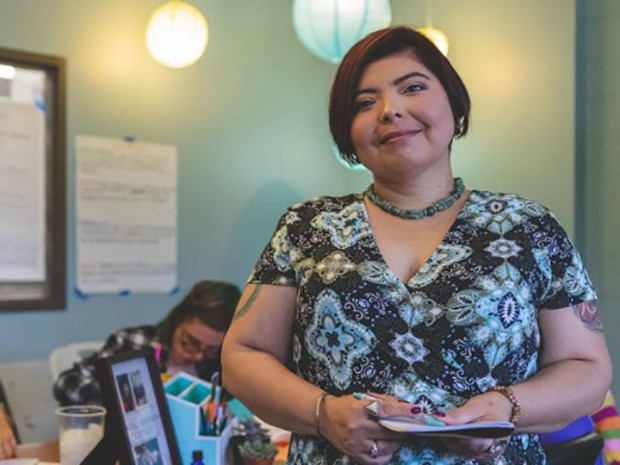 Araceli Esparza, host of the Midwest Mujeres podcast, was one of Kiva Greater Madison's loan recipients. Photo courtesy of Kiva

In 2019, Greater Madison Small Businesses Got $100K In Microloans

A microloan program aimed at women- and minority-owned businesses has loaned out $100,000 in greater Madison this year as part of an effort to combat discrimination in the financial system.

The global nonprofit Kiva launched in the Madison area in February as part of a three-year, $150,000 deal with the city.

Kiva's system lets business owners crowdsource funding for loans. It’s similar to a Kickstarter or GoFundMe, but the people who contribute are lenders, not donors. Business owners have to pay them back, but there's no interest, and the loans are small — ranging from $1,000 to $10,000.

"We have systems of racism, sexism, patriarchy that have prevented certain people groups from accessing capital to grow or start a business," she said.

That’s why Kiva prioritizes applications from women, people of color, immigrants and veterans — to give marginalized groups access to funding outside the traditional financial system. A little more than 60 percent of this year’s borrowers were women, and almost 80 percent were people of color, according to the city of Madison.

"We do look at income information, and we look at credit score. We look at some of those traditional factors. No one of those factors, though, will prevent someone from getting a Kiva loan," Crust said.

Once a business owner’s Kiva loan application is approved, they have to recruit a certain number of lenders, to show their value to the community.

Then the loan goes up on Kiva’s website, where people around the world can become lenders.

In Madison this year, the restaurant Little Tibet got a $10,000 loan to cover the cost of a walk-in cooler. Ruthie’s Comfort Food got $3,000 to refurbish its food cart.

Giant Jones Brewing Company co-founder Erika Jones used her $10,000 Kiva loan to open a tasting room and get her brewery’s organic certification. That shakes out to $277.77 a month over a three-year period, with no interest, Jones said.

"When you start a business, there's a lot of unexpected things that come up, and so being able to have just one other source in order to kinda diversify the way that our business was funded, was really exciting," Jones said.

Araceli Esparza hosts the podcast Midwest Mujeres. She got a $1,000 Kiva loan, which she said legitimized her brand enough to raise an additional $4,000 through GoFundMe, personal gifts and sponsorships.

"Honestly, I would not have gotten that four if it hadn’t been for that first one," Esparza said.